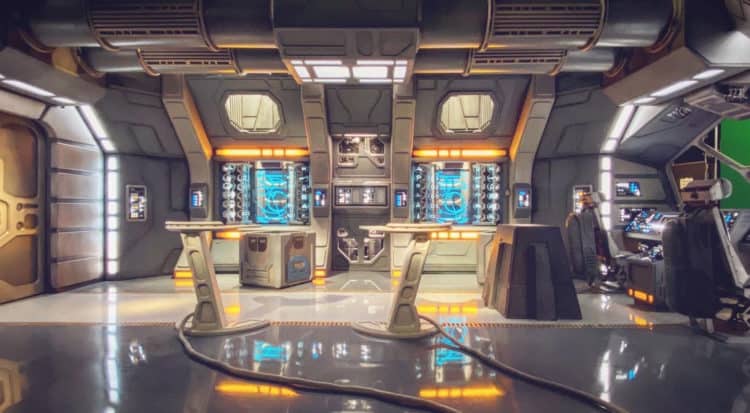 After looking at Ryan Brett Puckett’s resume, its safe to say the production designer enjoys working in the sci-fi, genre world. Some of his titles include The Walking Dead: World Beyond, The Star Wars Show, Jedi Temple Challenge, Science and Star Wars and the upcoming horror/thriller The Boy Behind the Door. We wanted to learn more about his process for designing these projects, so we conducted the below Q&A with him. Read the exclusive interview here:

-You are a fan of dark thrillers, which led to you working on The Boy Behind the Door. Is it the look/style of this specific genre that intrigues you most? If not, what are you drawn to most about these types of films?

Despite Production Design being very heavy on the visuals, I’m usually drawn to the characters’ emotional journeys in darker storytelling. Granted, I still prefer optimistic endings.  At a young age I was always drawn to supernatural stories, sci-fi, and old American mysteries. I love a journey through unknown danger that comes out the other side to a brighter future.  Getting to design things that are a little wild and imaginative is just an additional perk that comes along with it.

-Once you had the location locked in, did the look of the film change at all? To adapt to the perimeters you now had. If so, can you talk about this.

The house location was almost settled by the time I became involved, but we still had to figure out how far we could push the boundaries of the space.  There was a good basis for what the ideal look was going to be, then it was a matter of connecting all the dots between what resources could work with our time frame, and how to use them within the space while protecting the property.  Fortunately, we did not have to revise our look drastically, though there were a lot of small details I would have loved to have taken farther if the option were available.

-Do you start envisioning the look of a project immediately when reading the script? Or do you have to let it digest first and begin breaking it down?

Definitely both!  I usually have a distinct idea in my mind of where things are, and what they look like as I read.  Though I try to plow through a first read and let the story wash over me, before giving it a second pass.  It’s so much more intriguing to experience the magic of that emotion unfolding for the first time before breaking it down with a critical microscope.

-What are you most proud of with this film?

Indie films are always a very hands on, immersive scenario. Our Art Dept crew was a small group of phenomenal artists that made every day on set better as we successfully worked through all of the challenges with stunts, shooting in car trunks, and trying to keep the house in one piece.  Getting a chance to work with friends who bring really creative solutions to all of the challenges in film production makes all that hard work a rewarding experience.

A clean slate?  The idea of starting over without the generations of past social structure is certainly an intriguing idea that opens up a lot of avenues for exploration.  World Beyond seems like a great opportunity to take that adventure through a younger perspective, and I’m excited to see how it develops.

-You are the production designer on The Star Wars Show, which is a weekly series discussing all things Star Wars. You have worked on almost 150 episodes of this show. How do you keep things feeling fresh after this long?

The week-to-week credit absolutely goes to the amazing crew at Star Wars.com!  They really have fun with everything they create.  For the sets we always try to find some detail that is iconically Star Wars, then put a twist on it with a more traditional material or form, some are more obvious than others, but it’s a chance to geek out on small visual details, and then see who else catches it.

–Do you have a favorite episode of The Star Wars Show? Why?

I’m a little biased towards the cast interview for Rise of Skywalker since we pulled that set together in just a few days during a holiday week, but overall, my favorite episodes are with the artists at Lucasfilm and ILM.  The Dennis Muren episode is an early one, and I always find people’s journey into creative work inspiring.

A film series based around hope and perseverance seems like an alright place to hang out and make some cool things along the way, so I’m definitely a fan!  The short story is that some amazingly talented friends and I built the Episode IV Cantina years ago for a music video, and it eventually put us in touch with the people who created The Star Wars Show.  From there we kept trying to do something a little bit bigger and better with every project.  The Star Wars universe is such a deep well of insightful design to draw upon, and I really appreciate the opportunities we’ve had to play around in that world and work with all the talented and passionate people that make it happen.