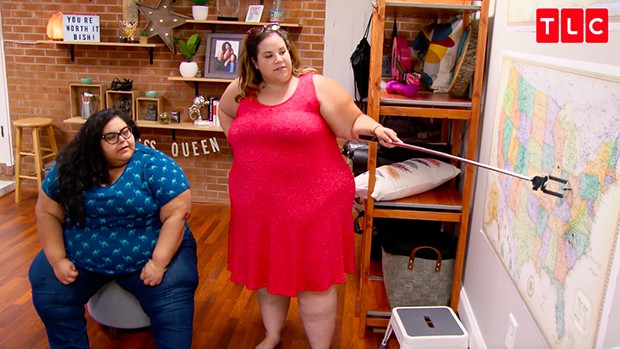 If there’s anything My Big Fat Fabulous Life is good for, it’s the continual drama that people want to see on TV. It’s quite natural for folks to look at someone that’s as big as Whitney Thore and harbor their own assumptions, that’s a given that people are going to say that she’s making poor choices, that she’s lazy, that she’s this, that, and all the other adjectives they can throw at her. Well, the lazy part is a definite yes and no situation since no, since she dances and works out pretty continuously, she’s not entirely lazy. But yes, as you might read in Erica Tempesta’s piece for the Daily Mail, she does tend to slack off a bit when it comes to her diet. The empty food containers and cups from fast food places don’t exactly speak to healthy eating habits, nor does her attitude that she ‘only takes small bites’ really make it any better. The fact that her trainer actually went ahead and dumped her as a client is extremely telling since quite honestly it’s not worth training someone that’s going to be undermining your combined efforts when it comes to getting healthy.

Fat shaming is not an acceptable practice when it’s done with nothing more than harm in mind and can lead to a host of psychological problems for those that don’t have the full mental and emotional capacity to withstand the kind of bile and vitriol that people can toss at them. Whitney seems to be able to hold her own, but as some people would indicate this might be that she’s a tad bit narcissistic herself. While it’s not fully known or harmful to love oneself it can lead to delusional thinking no matter one’s size, class, or anything else that helps to define them. In other words, simply loving yourself is great, it’s thinking that the world needs to love you that becomes a fine line that too many people cross. The reviews for this show range from the most offensive and horrendous to the most inspired and accepting and it’s not much of a surprise since the number of vindictive and opinionated people in the world tends to shift now and again depending on what’s put in front of them.

From a personal standpoint however I would say that no, this show is not a necessary staple of TV as it only builds into the continued reality TV genre and gives people yet another bit of drama to focus on that has little if anything to do with their lives. While Whitney’s condition is not entirely her fault, the continued weight gain and lack of motivation that is seen from time to time is unfortunately her doing. One can blame a number of factors for her continued obesity and some of them, genetics-wise, might be factual and inescapable. But in terms of any societal or cultural reasons that might be keeping her this way a lot of it seems to be on her shoulders to fix. The world around her, the sphere of influence she controls, is what she has to work with. Putting her on reality TV and keeping her there however only makes her plight reach out to more and more people who are overly-sympathetic or simply don’t have anything else in their lives to do but care about the lives of those they will never meet, speak to, or who will even know they exist. Does it seem a bit harsh to say this? Probably, and many ’empathetic’ and ‘decent’ human beings might want to vilify people such as myself for having the gall to say such things. But Whitney isn’t the only obese person in the world that blames a great deal of her problems on anything and everything else save herself, so why doesn’t anyone else get a show? If you guessed that it’s because a lot of other people take responsibility for their lives then you’re right on the money.

It’s also hard to feel all that sorry for Whitney Thore or even feel much pity for her condition since being on reality TV she seems to thrive in the spotlight and losing the weight would kind of negate the whole idea of the show. That seems to indicate that being obese is a positive thing no matter how much she’s working to drop the weight, because otherwise there would be a limited run of this series and it would be considered a show that’s moving towards a very well-deserved triumph and isn’t bound to celebrate a life that is spent being obese. There is also the paycheck that she collects from the show if you forgot about that, a paycheck that seems to indicate that she’s been compensated and celebrated for being a bigger woman. If you can force yourself to look past the hypocrisy of it and still enjoy the show then more power to you, but feeling sorry for this woman is hard to do when you figure out that she’s worth about $1.5 million due to her size.