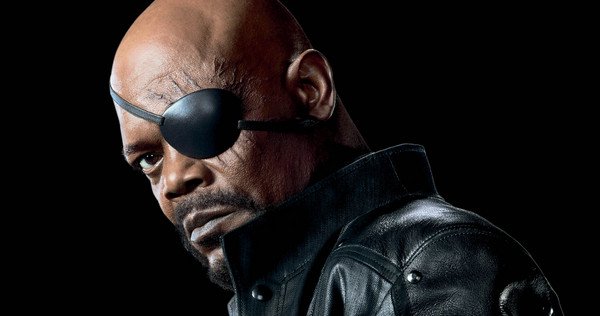 One thing that Samuel L. Jackson has to remember is that for all his ingenuity and capability as a character, Nick Fury is simply not on the same level as the other superheroes. He’s intelligent, he’s tough, and he’s definitely a fighter, but if he doesn’t have a gun or an escape route he’s not much good in a fight. Now you could say the same thing about Hawkeye and Black Widow, but really when push comes to shove a lot of people would rather have master assassins at their back then a guy that might have a snappy comeback on hand but not much else. Fury isn’t to be underestimated, but in a fight such as the one that’s coming he’s not much use unless the tech he uses can be adapted for space. Even then he might be more of a momentary distraction.

In the comics Fury wasn’t even a part of the Infinity Gauntlet, at least not in any major way. If he had a part at all it was based entirely on earth while the other heroes, especially the ones that could crumple him up like a dish rag, were off trying to get the job done.

So really when it comes down to the Avengers: Infinity War he wouldn’t have much of a presence anyway.

In the Black Panther movie though it might make sense to actually bring him in, but there don’t seem to be any plans to do this. It has a lot more to do with his role as the Avengers’ benefactor and mentor than it does his skin color too. The Black Panther was at one point and time an Avenger in the comics, and it only makes sense for Jackson to at least have a cameo in the film as he makes an attempt to recruit the king of Wakanda, if only as a reserve member. Yes, they did have those in the comics and there were a LOT of them.

It’s also said that he’s going to be showing up in the upcoming Captain Marvel movie with Brie Larson, so he’s not entirely done with Marvel, but at the moment it seems that his character is still in hiding. Â There has been a massive shake up after all since the events of Captain America: Civil War. The chances are good that Fury still isn’t the most popular person around and will need to lay low until things blow over. If he does come back when the Infinity War is over then hopefully it will be in a renewed capacity as Shield director once again.

As far as who the highest-grossing actor is I would have to agree with Jackson that Stan Lee shouldn’t even be in the conversation. He’s Mr. Marvel after all, but his cameos shouldn’t make him a contender for this distinction. Funny as it is and appreciated as it is that he interjects himself into the films, he’s still more of a guest star, not THE star. Samuel L. Jackson is still the man after all.