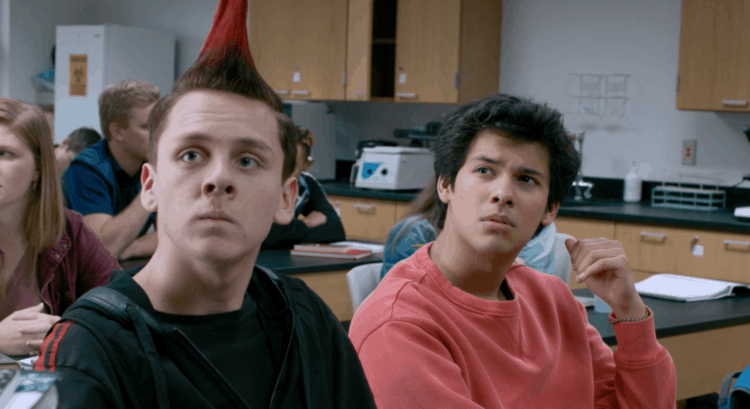 Jacob Bertrand began his professional acting career while he was still in middle school. At a time when most kids are only worried about recess and snack time, Jacob was already establishing himself as a very bright up and coming star. Now more than a decade after his on screen debut, Jacob is still here and he’s still going strong. Over the years, Jacob has been cast in a wide variety of roles, but it wasn’t until recently that he got the chance to show the world that he’s officially all grown up. His role as Hawk in the Netflix series, Cobra Kai, has allowed viewers to see a different side of Jacob and they seem to be loving it. Continue reading for 10 things you didn’t know about Jacob Bertrand.

1. His First Role Was In An Oscar Meyer Commercial

For a long time, the chance to be featured in an Oscar Meyer was something that every young aspiring actor was aiming for. After all, nothing says you made it like getting to sing one of those catchy Oscar Meyer jingles on national TV. Jacob got the chance to make his Oscar Meyer dreams come true in his very first professional job which was a commercial for the company.

2. He Was A Fan Of Karate Kid Before Cobra Kai

Quite a few of the young cast members on Cobra Kai didn’t really know much about the original Karate Kid prior to being cast for the series. That wasn’t the case for Jacob, though. He had actually seen the movie several times when he was younger and was a fan.

3. He Did Martial Arts Training As A Kid

Jacob was fortunate to come into his role on Cobra Kai with some previous experience with martial arts. He told Crooked Llama that he did karate for four years between the ages of eight and 12. However, he still had to go through a rigorous training process with the rest of the cast in order to be fully prepared for the show.

4. He Was Bullied A Lot Growing Up

Being a child star sounds like one of the coolest things on the planet, but that wasn’t exactly Jacob’s experience. He actually dealt with lots of bullying for several years. In his interview with Crooked Llama he said, “I was bullied a lot as a kid, all through elementary school. I really, really don’t care for bullies, I don’t really get why people do that. It sucked, I hated it.”

5. His Sister Inspired Him To Get Into Acting

Jacob developed an interest in acting at a very early age, however, his inspiration didn’t come from the usual things like watching a TV show or film that he loved. Instead, he was inspired by his sister who would often tell their parents that she wanted to become an actress.

Jacob tries to enjoy his life as much as he possible can, and for him that means living on the edge a little bit. He is a vert adventurous person who is always up for a good ol’ adrenaline rush. Jacob loves to do things like ski, surf, and explore the outdoors.

7. He Plays The Guitar

Jacob doesn’t just look like a rockstar on TV, he actually has the potential to be one in real life too. He loves music and is a talented guitar player who sometimes shares videos of himself rocking out on Instagram. Unfortunately for his friends, it doesn’t look like he has any plans to pursue music as anything more than a hobby.

Even though he isn’t what most people would consider a YouTuber, Jacob does have a YouTube channel that he started in 2015. He hasn’t posted anything in about a year and the videos he’s shared have been pretty random. Still, he’s managed to get more than 141,000 views.

9. He Was Friends With Cameron Boyce

People all over the world were stunned when news broke that Cameron Boyce had passed away unexpectedly at just 20-years-old. Even though Jacob and Cameron never got the chance to work together, they became friends early in Jacob’s career. After Cameron’s passing, Jacob wrote a heartfelt Instagram post in Cameron’s honor.

10. His Brother Is An Actor

Jacob and his sister aren’t the only people in the Bertrand family to choose acting as a career. Jacob’s older brother, Blake, is also an actor who has been in the industry for nearly 15 years. Blake has made appearances in shows like Criminal Minds and How I Met Your Mother.