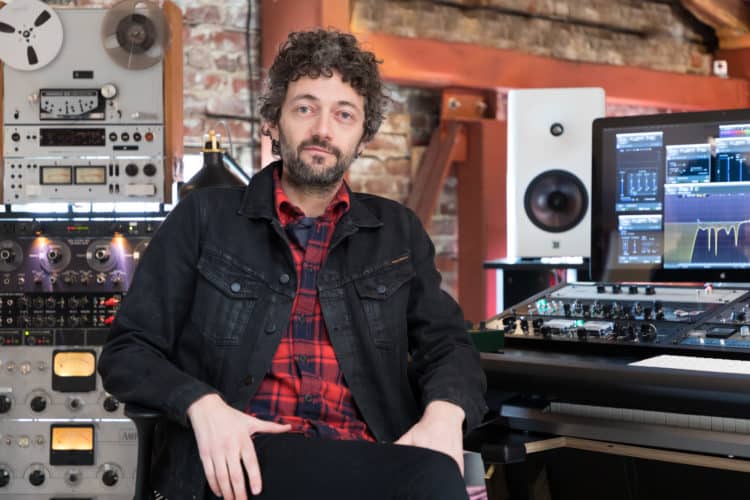 Super LTD’s most recent documentary, You Cannot Kill David Arquette, is currently getting a lot of buzz for showing audiences a very raw side of the Scream star trying to make it right with wrestling fans. To learn more about how the film was made, we spoke with someone who worked on the project, accomplished supervising sound editor and re-recording mixer Jacob Bloomfield-Misrach. Some of Jacob’s other credits include Crip Camp, The North Pole and the upcoming horror/thriller 12 Hour Shift. Below we asked him 10 questions about everything from creating his own company, IMRSV Sound, to the craziness of You Cannot Kill David Arquette.

-You are a composer, supervising sound editor and re-recording mixer. We know what a composer does, but can explain a little more about what a mixer and sound editor does?

My job as Supervising Sound Editor is to make sure the team is set up for success. There are a lot of people that help make a film sound great. Dialogue editors, sound effects editors, Foley artists, sound designers, pre-mixers and final mixers. The supervisor has to make sure everyone has what they need to do a great job. And the re-recording mixer is the one who puts all the pieces together. The music needs to fit around the dialogue and the sound effects have to be placed in just right.

-As you go from project to project, how do you decide which role you will do?

My favorite roles are composer and supervisor. I’ve done plenty of editing and sound design, but one of my strongest assets is that I know how a finished product should sound, and I have a good bird’s eye perspective of that. So I’m able to give useful feedback to the various members of the team.

-Were there any specific challenges you had with You Cannot Kill David Arquette, sound wise?

Oh yeah. When David is training in Mexico the audio got a little crazy. It needed to sound raw and powerful, but also intelligible so that we can understand what he’s saying. Between screaming at the mountain tops and chasing chickens, there were certainly some challenging scenes!

Great question. One of the reasons I love my job is because every sound is shockingly specific. Every lightbulb has it’s own unique sound. And there was already a fluorescent sound recorded during filming, but it was too far away. So we used a little bit of it, but needed to heighten that sound for the audience to feel it. If we added in the wrong bulb sound, it would clash, and the audience would be taken out of the moment. It’s critical that sound designers are accurate when adding sounds into a film, especially in documentaries.

-There is a very interesting ketamine scene in the film, what surprised you most about this scene?

That scene really did surprise me the first time I saw it. It’s so vulnerable. I give David and Christina Arquette a lot of credit for including that into the film. It’s a raw look into their personal life. I had no idea that David struggled with depression like that. I have a good friend who has also been trying the clinical Ketamine trials, but this was the first time I have seen a celebrity open up about it.

-What would you like people to know about your work on You Cannot Kill David Arquette that they might not realize?

I know I’ve done a good job if my work is invisible. People should finish a film and think about the characters, not the sound designers. Our work is what makes a film dynamic, and exciting… and even surprising at times, but it can never get in the way of the story itself. Sound design should only enhance a film, never distract from it. I think we did a good job with that on this one.

-You also have a horror film coming out, 12 Hour Shift. What was your favorite part of working on this film?

I’m a big fan of the director, Brea Grant, and the producers, Jordan Long and Matt Glass. Matt also scored the film and it’s probably my favorite score in the last 5 years. I just love working with wonderful people. It was a great script and really well executed. In fact, it just won best screenplay yesterday at the Fantasia Film Festival.

-Do you have a favorite genre to work in?

I love films that break the rules a little bit. Anything that’s willing to take a risk, or try something unusual. That’s what keeps this an art form.

-You have a post-production company, IMRSV Sound. Can you talk a little more about this and why you formed this company?

I was doing a lot of post sound work in Brooklyn before moving to Northern California, and I simply reached a moment where I couldn’t do all the work myself. I had outgrown my sole prop. It was time to level up. So I started hiring people and formed an LLC.

-What would be your dream project to score?

Someone should make a Netflix series based on Tron, or on Dune. I would go nuts to score a series like that.