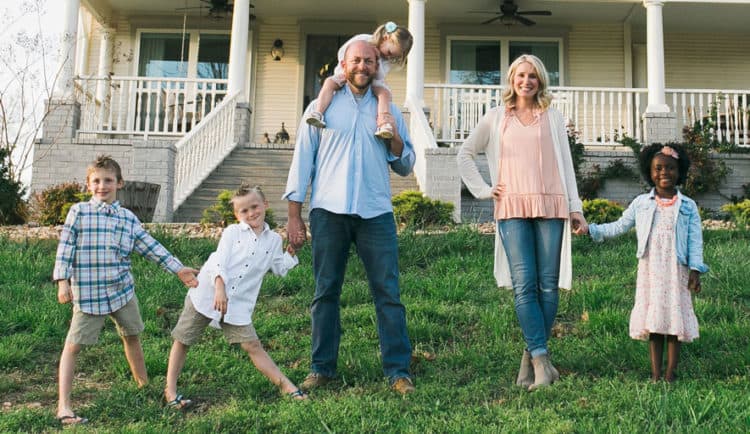 The late Michael Jackson sang that we should heal the world and make it a better place for every human race. Some people are gems; taking the message to heart and making it their life’s mission to make a positive difference. Jenny Marrs has a beautiful soul, and together with her husband, they are transforming lives not just in their hometown of Northwest Arkansas but also in Africa. Get to learn more about Jenny through these ten facts.

1. Her steadfast faith in God led her to adopt from Africa

On social media, there is a prevalent habit of people posting disturbing photos of children suffering and the person who posted asks the readers to type “Amen” as if that will end the child’s pain. Jenny Marrs confessed that she and her husband knew that God wanted them to take a more proactive role years ago. According to her, God opened up their hearts and eyes to witness the plight of orphaned children worldwide and wanted them to help ease the suffering. Therefore, Jenny and Dave decided to take in their daughter from DRC.

2. She and her husband cut their expenses to facilitate an adoption

Even the Bible says that faith without action is dead and Jenny and Dave Marrs being Christians believe that they have to be proactive. As much as they wanted to bring the fifth member of their family from the Democratic Republic of Congo to the United States, they did not have enough funds. Instead of being quick to ask for donations from the public, they did whatever they could first to save up some money. The couple reduced their expenditure and looked for any tax-deductible methods to have enough money to spend on the adoption process.

3. She and her husband joined a crowdfunding site to ease the DRC adoption process

As much as Jenny and Dave did not want to burden others with their troubles and even went as far as becoming frugal, it still was not enough. Therefore, they joined Pure Charity, a fundraiser to raise $8,000 to fund the final costs of adoption. According to Fund Your Adoption, Pure Charity has assisted over 500 families raise $2.5 million. The process is easy since there are no application forms, and all the donations are tax-deductible.

4. How her new series came to be

Unsolicited mail immediately gets spammed, and that is what happened when Jenny got an email from a person she did not know. She deleted it thinking it was spam only to realize later that it was from a programming executive at HGTV. Jenny’s friend had passed along information about Jenny, and although it has taken three years for the email to lead to something substantive, it was worth the wait. According to Jenny, they have filmed the eleven episodes in “Fixer to Fabulous” within the three years although each episode only takes 42 minutes.

5. She met her husband at work

When two souls are meant for each other, fate will always bring them together, no matter how long it takes. It is this principle that brought about the expression that if you let something go and it comes back, it was yours from the start. Jenny and Dave met right after college when they found themselves at the same company but in different branches. Love knows no limits and the two had a long-distance relationship. When they decided to settle down, Dave picked Northwest Arkansas where Jenny only planned to stay for two years at most. That was in 2004, and they have never moved since then.

6. She and her husband struggled with infertility

Cases of unwanted pregnancies keep rising, which in turn leads to more cases of abortion. For anyone who has struggled to get pregnant such reports only break their hearts. Many couples have infertility issues, but with time, they are blessed with more than one child. For instance, the Busby quintuplets came after Adam and Danielle struggled with infertility. Likewise, Jenny and Dave could not get a baby, and they even started thinking of adopting as published on Arkansas Online. However, before they could complete the process, Jenny got pregnant with twin boys, Nathan and Ben, whom she describes as rambunctious.

Jenny has a soft spot for vulnerable children. When she went to visit her daughter Sylvie in the DRC, Sylvie lived in an orphanage where they slept on concrete floors and barely had enough to eat. Since Sylvie suffered from a congenital condition, Jenny had her moved to a foster home where a Congolese doctor would take care of her. However, the orphanage where Sylvie previously stayed was in a pathetic state as the doctor kept informing Jenny and Dave. Jenny consequently started sending money for the doctor to cook enough food to feed the children at the orphanage. Later, Jenny and other mothers who were looking to adopt children from the country organized a drive that helped feed kids in three orphanages for an entire month.

8. She does not mind people laughing at her

Most people would prefer not to do anything to avoid becoming the laughing stock in their village. Jenny, however, does not care who mocks her efforts for as long as she meets her objectives. When HGTV approached them for the series, Dave feared that it would interrupt their peaceful life. Jenny, on the other hand, thought that their show would not be successful. She nonetheless wanted to do it because even if they failed at fixing houses, they would have gotten the opportunity to spread the word about their nonprofit farm, The Berry Farm.

9. She believes in teaching people to catch a fish

They say that once you give someone a fish, you will have fed him that day, but if you teach him how to catch fish, you will have fed him for a lifetime. Jenny is very charitable and has contributed money to help feed hungry children. However, she and her husband wanted to do more than donate money. Therefore they partnered with Pastor John Chinyowa, who is the head of an orphanage in Zimbabwe to help train the youth since after they are of legal age, they become delinquents. Through the Berry Farm which funds the orphanage, the youth in the Zimbabwean orphanage get vocational training to prepare them for adulthood.

Jenny describes herself not just as mother and wife but also as a designer and writer. Jenny shares all about her experiences as a mother and woman focused on community development on her blog, Blessings and raindrops. Since Dave is a builder, Jenny complements the work with her designing skills.