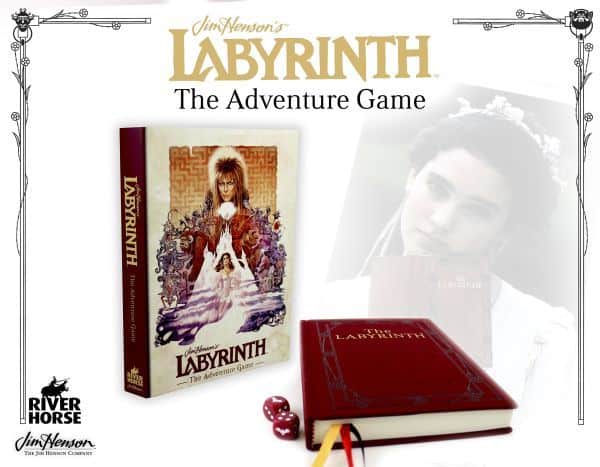 There is a lot of wow factor to this idea as Labyrinth as an adventure game as the construction of it is simply beautiful and the ideas are taken from the ideas that have been found in Dungeons and Dragons are applied in some ways, but the game is very much its own entity. For those that have seen the movie and can remember it well enough this game is bound to be a walk down memory lane in a big way, but it will also hold a lot of surprises. Much like one of the game books for D&D this particular adventure game has character sheets, maps that are shown within the book, and various adventures that can be explored in a random manner that will allow the players to find their way to the Goblin King who rests in the middle of the labyrinth, waiting for the players to find him for a supposed final showdown. The trick however is that the Goblin King has taken one item from each player’s character and the object is to reach him and get the item back while traversing the maze and seeking a way past the many pitfalls and traps that are there to challenge the players. So in essence it is a lot like D&D, but there are various differences that make this a unique story and experience.

Labyrinth was a strange movie to be certain but it was still one that a lot of people have found possible to keep in the mix when it comes to pop culture since it was a great story and it did after all star David Bowie, a man who was a superstar for many a year and couldn’t help but be awesome in just about anything and everything he did. Seeing the movie transferred into book form and made into an adventure where the players can choose what they want to do wand where they want to go in the labyrinth is the kind of thing that a lot of fans would no doubt get on board with in a big hurry. Even if someone bought the book for a keepsake and added it to a collection of pop culture memorabilia it would be an excellent addition since the story is something that a lot of people have selected to keep close at hand throughout the years since it was a fun and memorable tale that could easily translate to an adventure story.

One of the fun parts about the game is that the DM, or Dungeon Master, is in actuality playing the part of the Goblin King and thereby controls the game and its pacing. The characters are given a certain amount of time to make their way through the maze so that they can retrieve the items they lost to the Goblin King and if they don’t make it in time they lose. Their characters won’t die, but they’ll need to start the game again in order to make it through and find a way to outsmart the Goblin King in order to win the game and retrieve their items. The DM has the character sheet for the GK and as players advance through the maze the worst penalty that is experienced comes when they begin to lose time as a consequence of their poor decisions. There are ways to gain that time back apparently but the whole time that the game is running the clock is ticking and the GK is out to do his best to insure that the players are challenged every step of the way as they attempt to reach the center of the labyrinth. Much like the movie there are a large number of challenges that have to be faced and a few that are more cerebral in nature than anything given that there are around 100 different ways to go about the game. That might sound kind of daunting to many people but when considering what those who play D&D go through and the constant changing of a campaign due to the actions of one or more players, this game is actually very well-structured and doesn’t manage to deviate too much from its original design. Andrew Girdwood of GeekNative has more to say on the subject.

Roleplaying games are a lot of fun as they take the individual out of their comfort zone at times and allow them to play characters that might go completely against type and allow them to experience the game in a way that they feel confident in expressing themselves. If you’ve ever sat in on a D&D session or even joined in then you’ll know that while some people play strictly by the book, others get more enjoyment out of going off on their own campaigns and discovering just what they can do within the boundaries of the fantasy world. Labyrinth is, as I’ve said, very structured, but it’s still filled with choices that need to be made in order to win the game.