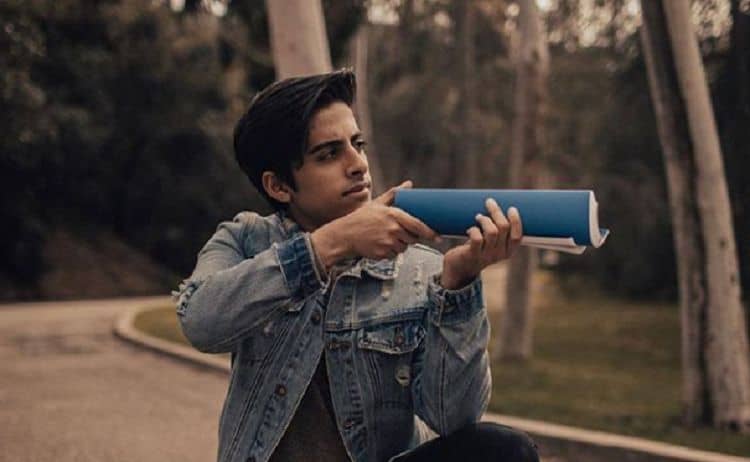 Karan Brar may only be 21 years old, but already the actor has made quite the name for himself. Best known for playing Chirag Gupta in the Diary of a Wimpy Kid film franchise and Ravi Ross on the Disney Channel ‘s Jessie and its spin-off Bunk’d, Brar is set to scale new heights in 2020 with Disney’s much-hyped upcoming adaptation of Jerry Spinelli’s coming of age novel, Stargirl. Find out more about the actor with these 10 little facts.

1. He has a tattoo in tribute to Cameron Boyce

In July 2019, Disney star Cameron Boyce passed away at the age of 20 after suffering an epileptic seizure. At the time of his passing, Boyce and Brar were roommates, having become close friends while working together on the Disney hit, Jessie. In January 2020, Brar revealed a new tribute to his friend, a large tattoo on his arm depicting an outline of the two actors with the words “Your partner in crime, Cam,” in the late actor’s handwriting.

2. The Incredibles had a huge impact on him

Brar may be big in entertainment circles, but with a height of just 5’0″ (1.52m), it’s fair to say low ceilings aren’t exactly a problem. In an interview with Sweety High, the actor revealed how watching The Incredibles as a kid helped him realize his size was no barrier to success. “I know it sounds strange but when I first watched that movie, I found it so cool that even though this family is comprised of people of all different shapes and sizes they’re still capable of extraordinary things,” he shared. “Considering my height disadvantage, that movie inspired me a lot.”

While most of find learning just the one language hard enough, some people can flit between tongues at the drop of a hat. Although he was born and raised in the United States, Brar can speak several languages fluently, including Punjabi, Hindi, and, of course, English.

4. The role of Ravi was created just for him

During the filming of Diary of a Wimpy Kid: Rodrick Rules, Brar became fast friends with actress Peyton List. List introduced the then unsigned young actor to an LA-based manager and agency. It was through his new manager that Brar scored the opportunity to audition for Jessie, although at that time, the role of Ravi wasn’t in contention. Brar first tried out for the role of Luke, a part he ultimately lost to Cameron Boyce. However, so impressed where producers with the young talent, and so eager were they to find a place for him on the show, they created the character of Ravi especially for him.

With the part of Ravi, Brar became Disney’s first regular Indian character, a role he takes extremely seriously. “It is cool and a big step for Disney. Disney is expanding its boundaries. We are going into an era where everyone is more culturally diverse,” he shared with UpfrontNY. “It is really cool that now they are introducing Indian characters and expanding their ethnic horizon, and more kids can have characters they love and connect to.”

When he’s not filming, Brar likes to spend as much time as possible volunteering for The Thirst Project, an LA-based non-profit that endeavors to bring safe drinking water to communities around the world. “It’s hard for me to fly out to other countries to go build wells, so I try to help on the home front because the more people involved, the sooner we can end this global water crisis,” Brar has told HNHN about his involvement in the charity. “It’s a big problem throughout the world that I don’t think enough people pay attention to.”

He may only be 20 years old, but already Brar’s award cabinet is groaning under the weight of his considerable collection of trophies. In 2011, he scooped his first award (a Best Performance in a Feature Film title at the Young Artist Awards) for his portrayal of Chirag Gupta in Diary of a Wimpy Kid. Since then, he’s added to his collection with several more Young Artist Awards (including a Best Performance in a TV series — Supporting Young Actor title in 2012 for Jessie, and a Best Performance in a Feature Film in 2013 for Diary of a Wimpy Kid: Dog Days), along with a Young Entertainer Award in 2018 for Bunk’d.

Brar’s career may be going from strength to strength, but as any actor knows, the fall from grace is quick, easy, and all too common. In case his career takes a downward turn, Brar’s put a plan of action in place… although it’s unlikely his family is too thrilled at the prospect. “My sister is off at college right now, she wants to be a dentist so the backup plan is that if she becomes really wealthy as a dentist, I’m going to just live in her guest house and freeload off of her,” he’s joked to Teenplicity.

While most 20 years old barely have two cents to rub together, Brer is proof that age is no barrier to a seriously impressive fortune. With 10 years of work already under his belt, the young actor is, at least according to Celebsmoney.com, sitting on the very respectable net worth of $1.6 million.

10. His best advice is to never give up

As a first-generation Indian- American, Brar has faced challenges throughout his career, not only because of the death of roles, but as a result of the stereotypes he’s constantly running up against. Over the last few years, the actor has been pioneering the idea of an industry and a future where biases and stereotypes are laid aside, and his advice to others is to keep pushing on in the hope of a brighter tomorrow. “This is extremely cheesy but don’t give up,” he tells fans on Crush Fanzine. “I’m not going to lie, being an Indian American actor is extremely difficult. But if you love what you’re doing, keep going for it. You can’t allow other people to hold you back.”