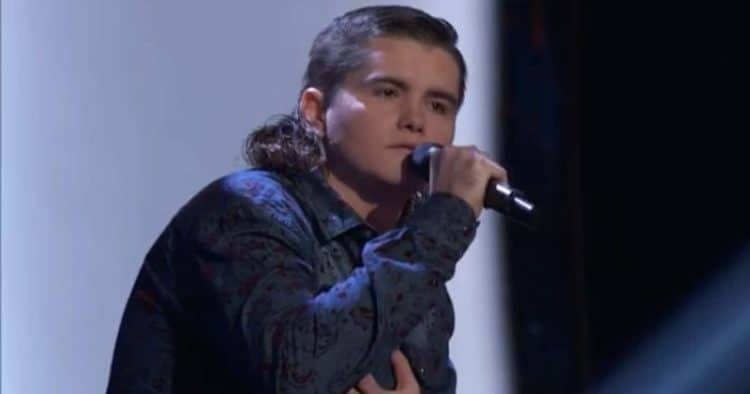 Everybody who auditions for The Voice hopes that they’ll perform well enough to get at least one judge to turn around. Getting all four of them to turn around is a dream come true. For Florida-based country singer Kenzie Wheeler, that dream has officially become a reality. His performance of “Don’t Close Your Eyes” left all of the judges fighting to get him on their team. Although most people assumed that he would pick Blake Shelton, Kenzie eventually chose to be on Kelly’s team. Even if country music isn’t really your thing, there’s no denying that Kenzie has an incredible voice. Here are 10 things you didn’t know about The Voice contestant Kenzie Wheeler.

1. His Mom Submitted His Application For The Voice

Sometimes we all need a little bit of a push to go after the things we want, and that’s exactly what Kenzie got when his mom sent in his application for The Voice. Although he may have been feeling some nerves, Kenzie knows his mother always wants the best for him and he is thankful that she helped him take the leap.

Singers come to The Voice with all sorts of experience, and that’s one of the things that makes the competition so interesting. Kenzie has been working hard to lay a strong foundation for the last several years and he’s already released a full length project. His album, Dover, is named after his hometown.

3. He Works In A Warehouse

With a voice like Kenzie’s, most people would agree that he should be traveling all around the world performing for packed audiences (post COVID, of course), but at the moment his day job is a far cry from that. He currently drives a pallet truck at a grocery store warehouse. Hopefully that won’t be the case after The Voice.

Sure, The Voice is the first time that Kenzie has ever been on a TV show or done anything of this magnitude, but it isn’t the first time he’s competed in a talent show. In 2016, he won Tampa Teen Idol thanks to a great performance of “Buy Me a Boat” by Chris Janson.

Kenzie doesn’t have any children of his own, but he still plays a very important role in his family. He is a devoted uncle to two adorable little nephews. Unfortunately, both of his nephews are too young to know what The Voice is, but one day they might just be able to say they have an uncle who is a famous country singer.

Kenzie isn’t just a country musician, he’s a true country boy at heart. When he isn’t singing, you can usually catch him outside having some fun. He enjoys a variety of activities including fishing, hunting, and off-roading. In case you were wondering, yes, he does have a pick up truck.

7. His Mullet Was Inspired By His Dad

Admit it, Kenzie’s mullet was the first thing you noticed about him. Although the hairstyle may seem a little unusual, it’s gotten Kenzie a lot of attention and it’s quickly becoming his signature. According to an article by a local Florida news outlet, Kenzie’s dad is the one who inspired him to grow the mullet. So far Kenzie has been loving the mullet and he has no plans to get rid of it.

Kenzie may be in his early 20s, but his taste in music goes way beyond his years.  He loves older country music and believes it has more of an authentic feel. He tends to feel that many newer country songs are a little bit too close to pop. Country music legend George Strait is one of his favorite artists.

If you loved Kenzie’s performance on The Voice and want to see more of what he can do without waiting to see him again on the show, I have some great news for you. Kenzie has a YouTube channel where he’s uploaded several videos of him singing. The channel currently has more than 57,000 views.

10. He’s Opened For Some Big Artists

In a lot of ways, Kenzie is just getting started in his career – but in others, he’s already covered a lot of ground. Kenzie has gotten the opportunity to open for some pretty well-known artists including Craig Campbell and Charlie Daniels. Pretty soon, Kenzie is going to have people opening up for him.