Home
Movies
Louis in the Bronx: Coppola and the Hitchcock Affect 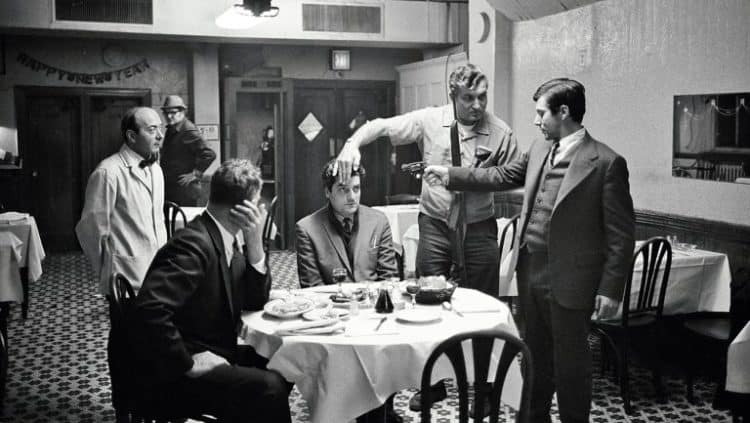 Santino Corleone finally discovers the location of a pivotal business meeting for his brother Michael. It is revealed that the meet will take place at Louis Restaurant in the Bronx. When Sonny asks if anybody knows this joint, the retort is simple, “it’s perfect for us”. Indeed, Louis in the Bronx would prove to serve perfect the ambitions of the fictitious Corleone crime family. In reality, the fictitious location would perfectly encapsulate the pastiche of Alfred Hitchcock by Francis Ford Coppola and the changing of the cinematic guard.

It is the defining scene in one of the most renowned films of all time. Simply referred to as “The Restaurant Scene”, the director’s masterful manipulation of this iconic sequence establishes the tone and mood for the rest of the narrative. The film is 1972’s The Godfather and the director is Francis Ford Coppola. At the age of 32, Coppola had already gained respect and credibility within the film industry. He had won an academy award a year earlier for best original screenplay on Patton. Coppola however had never attempted a project with the scope, magnitude or significance as The Godfather. It was inevitable that the budding filmmaking genius would feel a bit overwhelmed. As a result, Coppola subscribed to the avenue ideal for any brilliant young genius; he drew upon the expertise of the geniuses that came before him.

In addition to being a glorious student of the craft of filmmaking, Coppola is an incredible scholar of the industry. His historical influences can be noticed in his work, particularly that of Hollywood’s golden age, ranging roughly from 1920 to 1960. Coppola’s pastiche of Hollywood’s golden age directors are evident throughout The Godfather. He has stated that Elia Kazan is his greatest directing influence. As such, Marlon Brando is not the only similarity shared between The Godfather and Kazan’s masterpiece On the Waterfront, made some 18 years previous in 1954. Shades of the distinct styling of John Ford is conjured on numerous occasions by Coppola including the customary “tenderfoot shooting lesson” (Belton) embodied by Clemenza’s assassination dissemination to Michael. It might as well be John Wayne showing Jimmy Stewart how to wield his hog leg in Ford’s 1962 classic The Man Who Shot Liberty Valance. The Hitchcock affect however is unmistakably on full display.

In The Godfather, the pastiche of Alfred Hitchcock is thick and palpable, particularly with regard to building suspense. Coppola’s infamous Godfather notebook (which served as essentially a working guide during the filming of the picture) illuminates the young director’s process during production. Within it, Coppola constantly scribbles in the margins, “How would Hitchcock design this”? In an interview from 2011, Coppola stated that part of Hitchcock’s genius was due in large part because he “was such a master of manipulating information for the audience. Rather than withhold information, he would give the audience information.” Hitchcock’s influence is certainly felt throughout The Godfather but no other scene expresses Coppola’s pastiche of Hitch more than the scene set in Louis in the Bronx. The scene where Michael eliminates Sollozzo and Captain McCluskey is the most suspenseful scene in the picture and is pure Hitch.

The Restaurant Scene lingers to an uncomfortable length. Nearly six minutes, the scene is reminiscent of a Bruno encounter in Hitch’s 1951 classic Strangers on a Train. The audience knows the plan for the ultimate goal in the scene but does not know if it will go as planned. As Michael finally makes his way back to the dining room from the bathroom, he inexpiably and calmly returns to his seat at the dinner table with Sollozzo and Capt. McCluskey. Because Coppola has equipped the audience with the necessary information, the tension and suspense has now been built to extreme levels because the audience knows that Michael has not followed Clemenza’s directive to “come out blasting”. This creates a feeling of unnecessary and uncomfortable anticipation.

At this point in the scene, the audience and Michael are the only ones who are wise to his true motives. The perturbed uneasiness is intensified because the plan has not been carried out as originally formulated. The audience is cognoscente of the fact that the longer the scene drags on, the less chance the plan has of succeeding. At this point, Coppola wonderfully incorporates a favorite Hitchcock tension building device; intensified juxtaposition of sound. As the close up of Michael’s face inhabits the shot, all that can be heard is the sound of the elevated train. The suspense once again escalates via Coppola’s use of the technique so famously incorporated by Hitch. As film scholar Max Winter states; “The two loudest sounds, and markedly so, are the popping of a wine bottle cork and the screech of an elevated train. Both increase viewer tension, naturally, since they’re unusual sounds, and Coppola cranks them up for that very reason”. Coppola refers to this as “frozen time”.

Finally, Michael shoots the two men but ignores another of Clemenza’s instructions. He does not shoot both men in the head two times. Then, as he makes his way to the door, he is still holding onto the gun. The audience knows full well that Clemenza instructed Michael to “let his hands drop to his side and let the gun slip out”. The fact that the audience has been supplied with this information creates anxiety until Michael drops the gun just a step from the door. This phenomenal use of anxiety manifests in the form of manufactured tension. This practice was a Hitchcock hallmark and one that Coppola made brilliant use of.

The Godfather is more than just a landmark film, it is a cinematic institution. With this incredible piece of production, Francis Ford Coppola made his bones. This piece of work announced Coppola’s genius and one way he achieved this was to borrow from those genius filmmakers that preceded him. Coppola makes no bones about this as he related in a 2011 interview: “Don’t worry about whether it’s appropriate to borrow or to take or do something like someone you admire because that’s only the first step and you have to take the first step”. This principle is encapsulated no better than in a scene from an Italian restaurant.

The Restaurant Scene is highlighted by its use of manufactured anxiety and the increasing tension that manifests out of anticipation. Alfred Hitchcock famously stated, “There is no terror in the bang, only in the anticipation for it.” This pivotal scene reeks of the Hitchcock auteur and is a prime example of Coppola taking a lesson from his forebears. The book describes the interaction in three and a half pages at “a small family place with big booths” called Luna Azure. Through the directional lens of Coppola, what is captured on film is the passing of the generational cinematic torch with a flawless scene at Louis in the Bronx.