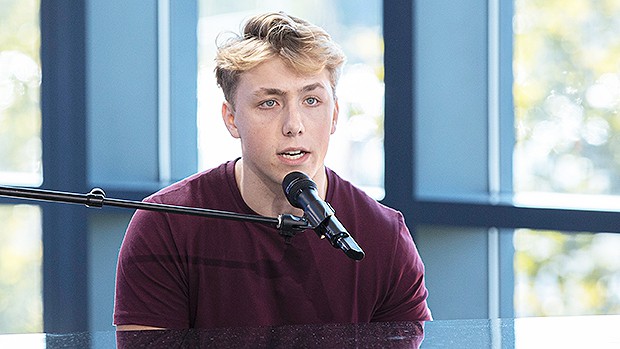 Louis Knight has made the headlines recently after his performance in the third season of “American Idol.” The 19-year-old was invited to audition through a call, which he thought was a joke. However, after confirming that it was true, he realized that not attending the audition would be passing on the biggest opportunity in his life. He was nervous, but when he sat down and sang “Changes” an original song, he calmed down and delivered a breathtaking performance. Now everyone is curious to know who the teenager is, so we dug a few facts about him that we share below.

1. His father inspired him to be a musician

Louis disclosed that he learned to talk and immediately started singing. The inspiration for his passion for music comes from his father, who was in a rock band for 15 years. Louis’s father even encouraged his children to play musical instruments, so it is no wonder that Louis knew the first four chords of every pop song. He is now good at playing the piano, and by the time he was writing “Just Kiss Me,” he had already started learning how to play Spanish classical guitar as he told Vents Magazine.

Louis may have started playing instruments and singing in his childhood, but it is not until he turned 14 that he started writing his own music. Previously he used to sing covers, but considering the success of his songs, the teenager is going places. He also admits that he has made enormous strides in his songwriting skills, as evidenced by the lyrics in his EP, which he released last year.

3. His parents are supportive of his music

It is a blessing to have parents who support your dream, and Louis is one lucky man. After he graduated from high school, his parents allowed him to take a year to concentrate on his music.

4. He is a pizza delivery guy

As much as Louis’s parents are supportive of his music, they must want the teenager to learn how to be responsible. Therefore Louis has had to work to get enough money to launch his musical career; he is a part-time pizza delivery guy. Now that he is headed to Hollywood and with Luke already getting chills from Louis’s performance, maybe soon, the musician will not need to hold down a pizza delivery job anymore.

5. He had a tough time adjusting to Philadelphia

Having no friends to hang out with is not something that most children want to deal with, yet it became a reality for Louis and his brother Max when the family moved from London to Philadelphia. At the time, Louis was only 11, and he got his first friend, Russell, after they bonded while playing soccer. From then on, life became bearable, and today he considers himself a Philly-guy.

6. He wrote the song “Change” in thirty minutes

After one of his best friends, Russell, committed suicide, Louis thought it best to write a song as a tribute. However, the pain was too much to bear, yet none of the words he wrote were reflecting his emotions. He kept trying to find the right words to capture the feeling, and once he did, it only took him half an hour to pen down the lyrics. The motivation behind writing the song was also to raise awareness of mental health, and so far, writing it is the proudest moment in his career. Therefore he will donate all the proceeds from the song to the American Foundation for Suicide prevention.

7. Luke Bryan already thinks he is the biggest star so far

Luke Bryan, one of the judges on “American Idol,” could not help but praise Louis saying that he might be the biggest star the show has ever seen; he even had chill bumps listening to the young musician. Of course, that did not go well with Katy Perry, who added that Louis needed to remain humbled; otherwise, he might not be aggressive enough. In her opinion, he is not yet the biggest star in the three seasons of the show, as published in MJS Big Blog.

8. Why he got a tattoo of “Small Victories.”

Louis’s best friend used to say “small victories” to refer to the little steps he was taking towards overcoming his challenges. Although, in the end, the friend committed suicide in January 2018, the phrase has stuck with Louis to this day, and he uses it to reflect on his small wins. Matter of fact is for his 18th birthday, he had the phrase tattooed on his arm, and he named his album “Small Victories” since, of course, compiling a new album is a win for the musician.

9. He wrote the second verse of “Just Kiss Me” while in Spain

Young love is beautiful, and during the adolescent stage, teenagers believe it will last forever. Louis thought he had found his soulmate in high school, but when his girlfriend went to college, that was the end of their relationship. It hit him hard, and the best way he could process his loss was through writing a song, “Just Kiss Me.” He was at the time about to enter his final year of high school and had gone to send his summer in Malaga, Spain where his grandparents live.

10. When he knew he would pursue a music career

Although Louis discovered his passion for music ages ago, he was not sure he would want it to be a career. He only enjoyed singing and posting covers of his favorite songs on YouTube. Therefore even when he released his EP while in his junior year of high school, it was available to his family and friends only. However, in his senior year, he began working with Matt Fell, who also doubles up as his co-producer and bandmate. The teenager at that point realized music was more than a passion; it could be his career as well. Thus, Matt introduced him to Matt Weber, and together, they have been creating music.