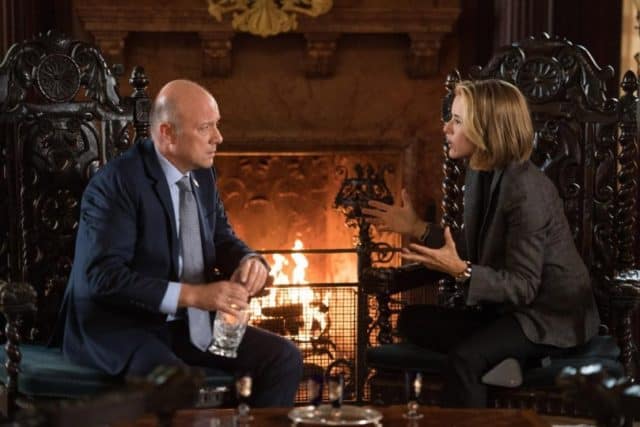 Sometimes, we are more equipped to deal with other people and countries rather than Mother Nature. In this week’s episode of Madam Secretary, Mother Nature takes center stage. Elizabeth works with former U.N. employee Kat Sandoval (Sara Ramirez from Grey’s Anatomy) to prevent a worldwide pandemic of smallpox. Henry also tries to have The Talk with Jason after the latter confessed that he is in love with Piper.

When I saw the eco-activist Atem Markevich lying in that hospital bed in quarantine, it scares me. It also breaks my heart. The guy dedicated his life to saving the planet, and the thanks he gets is a smallpox infection that later took his life. Looks like he won’t be able to go on that VIP tour of D.C. after all.

At first, I thought the same thing the secretary did and pointed the accusing finger at Russia. It turns out that we were wrong on that front. Markevich did not contract the virus from his home country, but from the permafrost in Siberia. He was taking photographs of the oil spill and given that the permafrost is thawing, the gases and diseases that laid dormant for centuries is let loose. Elizabeth had to convince the Russian Foreign Minister Konstantin Avdonin to get on board to help prevent a global outbreak. The plan is to use animals like musk ox, moose, caribou, bison to trample the snow. That and use peat moss to regulate the permafrost’s temperature. It worked, of course, but at a price. All U.S. diplomats working in Russia are to go back to the States. Harsh terms, no?

Meanwhile, Henry attempts to have The Talk with Jason after laying down the ground rules. It’s a sensitive topic for any parent as Henry stumbled on his words when he and Elizabeth teamed up to talk with their son. That particular scene was a bit hard to watch as I felt the awkwardness of the situation. Kudos to Piper’s parents for beating them to the punch as Jason informed his parents that he and his girlfriend are not indulging in sexual activities. Guess the McCord parents dodged a bullet with that one.

All in all, everything worked out. I am a little disappointed that we didn’t see any Stevie/Dmitri interaction in this episode. On the other hand, Mother Nature comes first. Oh, it seems that congratulations are in order as Kat becomes the new Policy Advisor at the State Department. The episode ended on a suspenseful note as Henry concluded that the leak is an inside job. That one of the members of the Gang of Eight is responsible. Now the question becomes who is it and why did they decide to sell out their country?

I don’t understand that when men reach their breaking point and act out, it’s called passion and when women do the same, they’re called crazy. Maybe we should take a hard look at that hmm?

Elizabeth wants to retire on a cool farm someday. It’s a sweet dream to have, but we much prefer it if she stayed at the State Department a little longer. Besides, no one gets things done better than her. I admire her determination to stop at nothing to achieve her goals. Wish I had her confidence.

Mammoth/elephant hybrid clone. Are they working on that?

Elizabeth works with former U.N employee to prevent global smallpox pandemic. Henry attempts to have The Talk with Jason in this week’s Madam Secretary.