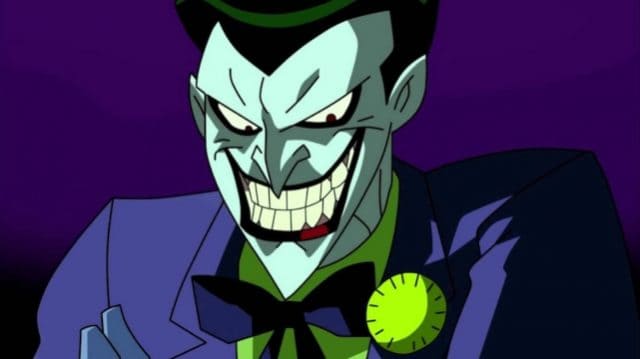 A lot of people didn’t have a clue who was voicing the Joker for so long until Mark Hamill was revealed to be the voice of the iconic villain. His inspirations for this character however are kind of interesting in an odd sort of way. He cites The Invisible Man along with Jay Leno and and Howard Cosell, which might sound a little strange until you learn how he incorporated their manner of speech and the edginess that was brought into the voice. He’s been playing the voice of the Joker now for well over two decades and few have ever done it better, but none on TV.

As you can imagine it takes a certain amount of style to portray such a villain, as he’s not the average, run of the mill bad guy that has well-defined motives and will follow any kind of rules. The Joker is pure chaos given form, and if he was a super-powered villain he’d be one of the most dangerous beings in the DC universe. In fact even without them he ranks pretty high on the scale. He’s taken on some of the more powerful heroes and somehow always managed to get the upper hand at least for a little while. Who else can say that they’ve been a constant thorn in Batman’s side for so long? In many ways the Joker has kind of redefined what it means to be a villain, as he’s the extreme to which a lot of them won’t ever go even if they are that bad. This is the kind of guy that could give someone like Lex Luthor a run for his money just because he’s not at all predictable and could do just about anything.

But aside from just being crazy he has a sense of tactics that are as insane as he is but still manage to work since they all seem to operate as a kind of backup just in case the first ten or twenty don’t work. The Joker is anything but stupid and Hamill has managed to portray that in his voice right along with the craziness of it. Listening to him do the voice when he’s out from behind the sound booth is kind of frightening really since it’s so easy to see him as Luke Skywalker but it’s harder to see him as anything else. Hearing that maniacal voice come cackling out of his throat is kind of horrifying but also really impressive since it did manage to land him a role that he’s held onto for longer than Luke Skywalker to be honest. Star Wars fans might not want to admit it, but Hamill has been the Joker much longer than he’s been a Jedi Master, at least when it comes to being onscreen.

The great thing about it however is that there’s no end in sight so long as he can keep on doing the voice. Old age might one day make it less than possible for him to keep reprising the role, but for now he’s one of the best Joker’s that’s ever been filmed.