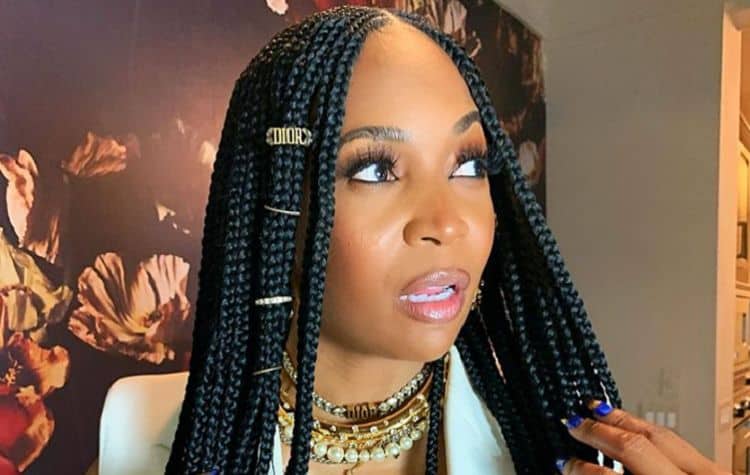 â€˜Real Housewives of Atlantaâ€™ star Marlo Hampton has become more and more famous lately, thanks to the program she is known for starring in. Considered a â€˜fashion guruâ€™, the reality star can also be seen in â€˜I Dream of NeNeâ€™, and before that was an entrepreneur and private stylist who specialized in creating images for those who came to her for assistance with dress, makeup, hair, and the like. But television stardom can only tell the public so much, and mostly it only serves to introduce people to the stars who fill their screens and nothing more. So, now that the public has met Marlo Hampton, the question really is, â€˜Who is sheâ€¦really?â€™ Itâ€™s true; just because we watch an individual on television doesnâ€™t mean we know anything about them at all, even if what we watch them on is a â€˜realityâ€™ show.

Letâ€™s dig a bit deeper into the life of this woman and find out for ourselves. Who is Marlo Hampton? Where is she from? How did she fall into the life of a TV star? Is there a specific path one must take to go from entrepreneurial endeavors and basic image consulting to being on a â€˜Real Housewivesâ€™ show? Was it something in their upbringing, something that they pursued from childhood? Or was it simply a matter of them being in the right place at the right time? To get a better idea, letâ€™s take a closer look. Below is a list of ten things that most of us probably donâ€™t know about Marlo Hamptonâ€™s life.Weâ€™ll cover a variety of facts from her birth and childhood to adulthood, and by the time were done weâ€™ll have a bit of an idea, or at least, a better idea than we had before. Read onâ€¦

Marlo was born February 7, 1976 in St. Petersburg, Florida. She was born in the Year of the Dragon, and was born an Aquarius according to the zodiac. Her mother was a drug addict, whose behavior of use resulted in Marlo being raised in the foster care system for much of her young life. She attended the University of Southern Florida, where she studied interdisciplinary science and social work and earned her BA in the same from the College of Arts and Sciences.

2. Career Paths and Giving Back

As an adult, Marlo was living in Atlanta when she opened a trendy fashion boutique that saw much success. It was at that point that she formed â€˜Glam it Up!â€™, a foundation which had a focus of helping teenagers living in foster care. â€˜Glam it Upâ€™ does incredible things for the young women they sponsor, like giving them an incredible Christmas luncheon and topping it off with personalized gift bags filled with things like makeup, hair products, personal hygiene items, and so much more. Itâ€™s more than a worthy projectâ€¦it helps make dreams come true by edifying the self-esteem of girls in foster care.

During the course of â€˜Real Housewives of Atlantaâ€™, many found themselves slightly confused and in the dark when it came to Marloâ€™s true â€˜careerâ€™. What is it, really, that she does? Well, she finally cleared it up for fans. She said that while it appeared that she had a â€˜multitudeâ€™ of careers, the fact is that she simply â€˜doesâ€™ a lot. From style guru to being an expert on manners, she has a bit of knowledge about just about anything in life that we find her contributing to professionally. Thatâ€™s really all there is to it, and she attributes it to her being an Aquarius. Aquarians, she states, always have to have about fifty things going on at once. Letâ€™s take a better look at that, shall we?

Yes, we know that Marlo is an Aquarius. Aquarius women are deep thinkers that have a mischievous streak about them. They are considered the â€˜whole packageâ€™, a combination of sexiness, intelligence, and adventurous fun all in one. While they have open minds, this trait can contribute to unpredictability, and this may give others a sense that they are a little â€˜offâ€™ when compared to others around them. It may even make them seem calloused or cold to those who are given to emotion.

Marlo has a ton of knowledge and skill packed into her person. Her list of â€˜creditsâ€™ includes being a designer, a business owner, a stylist, she has a line of hair products, has a YouTube channel, is an etiquette expert, does real estate, runs her non-profit, and she is a writer. Thatâ€™s a lot of eggs in a basket that doesnâ€™t seem big enough to hold them, but the fact is that she is doing a brilliant job keeping her eggs in one place.

A floater is someone, particularly on a job, that seems to do a bit of everything, and is really not assigned to a particular position. In RHOA, Marlo has been friends with just about everyone, and has never really stayed TRUE friends with anyone in particular. She was friends with NeNe, then moved on to Kenya. Next, after a falling out with Kenya over a birthday party invite (or lack thereof), she relocated to Sheree, who had been her enemy at one time. So, is she the real friend of ANYONE, or is she simply a dramatic â€˜FLOATERâ€™ that the show uses to keep the drama alive? You be the judge.

While we have yet to discuss Marloâ€™s parents or siblings, she is not an only child. She had at least one brother whose name was Curtis. Curtis ended up getting a traumatic brain injury, and as a result of the injury he died. This was something that was very difficult for Marlo, and while it wasnâ€™t something she discussed extensively on any television program she was on, she did make posts about it on social media, which got plenty of comments and support from followers and peers.

Marlo Hampton is single, and while she was once engaged to Charles Grant, the pair never married. Surprisingly, however, they are together to this day; they simply arenâ€™t engaged any longer. As for children, well, this is a topic that she will not willingly discuss with the press or any other form of the media. As far as we can tell, Marlo has no children of her own, though she does have a nephew that was named for her late brother Curtis, and of whom she loves and is very proud of.

With a personality like hers, did you have any doubt? Yes, Marlo is active on social media. On Twitter she can be found at @Iheartmarlo. Her Instagram account has approximately 1 million followers, and can be found under @marlohampton. She is on Facebook under her own name and her page has about 198k likes. As for Snapchat, she can be found under â€˜dressmemarloâ€™.

While she has her fingers in a lot of professional pies, so to speak, many think that she must be loaded, and compared to most of us, she is. But when it comes to celebrity status, her net worth is relatively average. Itâ€™s likely that this can be attributed to the fact that one of her biggest projects is, in fact, her non-profit, which was never created to make her rich, but to enrich the lives of the kids. It is estimated that her personal net worth is around $600k. Keep in mind that, in addition to the fact that she has a non-profit, she is NOT one of the primary stars on â€˜Real Housewivesâ€™, nor has she been on â€˜I Dream of NeNeâ€™ or any of the other shows that she has appeared in.

Well, Iâ€™d have to say weâ€™ve learned a lot about Marlo today. Our perspective on this busy woman is that she loves the attention that television appearances brings her, and she also loves to be in the mix when it comes to the lives of her friends, as well as THEIR friends. This may be a bit petty and trivial, and in reality truly is. But we think that the work she does with â€˜Glam it Up!â€™ is nothing short of heroic, and for all we know the television work she engages in goes more to help the kids that benefit from her charity than we have any idea about. Regardless, we think its angelic, and it is our hope that Marlo and â€˜Glam it Up!â€™ are successful in their pursuits to help the kids, and we believe that is should get the recognition it deserves. So, pettiness aside, hereâ€™s to Marlo Hampton and the children of â€˜Glam it Up!â€™ May it all be yours this season.