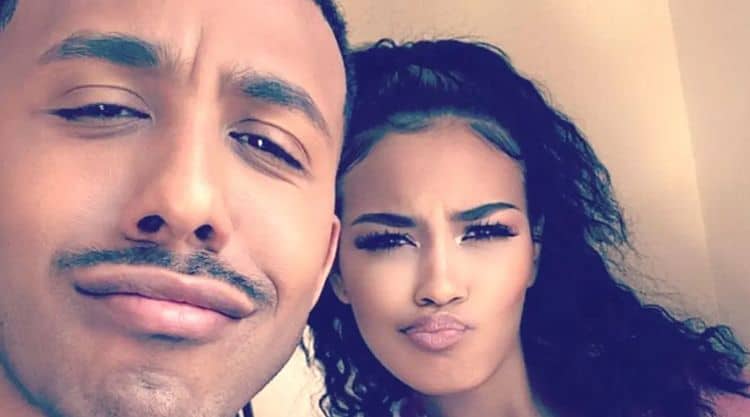 From the 90s to the mid 2000s, Marques Houston was at the top of his game. He began his career as a member of the R&B group Immature which eventually became known as IMx. He also became well-known for his main role on the popular sitcom, Sister, Sister in which he played an annoying neighborhood boy named Roger Evans. Despite the fact that Marques Houston was once one of the hottest names in the industry, he is often forgotten in conversations about the G.O.A.Ts (greatest of all time). However, recently, Houston’s name has been brought up in a completely different conversation after the internet found out that he is engaged to a 19-year-old woman. Not only is he nearly 20 years younger than his fiancé, but the young woman refers to Houston’s former manager, Chris Stokes, as her ‘dad’.  Keep reading for 10 things you didn’t know about Marques Houston.

Marques has had a couple of public relationships over the years, one of which was with singer, Mila J. Although Mila J has only released one album, she is still highly respected in the music industry. She is also well-known for being the older singer of Jhene Aiko.

Since IMx and B2K were both managed by Chris Stokes, they have always been closely associated with one another. For years, there were rumors floating around that Marques Houston and B2K front man, Omarion, were half brothers. While that isn’t true, Houston is related to another member of B2K. He and J-Boog, whose real name is Jarell Houston, are cousins.

3. He Is Inspired By Old School Music

Even though Marques Houston is a veteran in the R&B game, he is also inspired by many of the legendary veterans who came before him. He said, “A lot of my musical inspiration were the old school artists like Prince and Marvin Gaye…I’ve always been a huge Marvin Gaye fan. He was the original King of R&B. The ladies loved him. We all kinda patterned ourselves after Marvin Gaye as far as being a suave ladies man.”

4. He Has Written And Produced Movies And Shows

Most people are familiar with Houston for his work as an actor and a singer, but he’s also done plenty of things behind the scenes as sell. He has worked as a writer and producer on several films and TV shows including the TV mini series Howard High and the film Running Out of Time.

For most of his career, Marques Houston didn’t discuss his religious beliefs. In 2016, Marques announced that he had become a Jehovah’s Witness. Some people were surprised by Houston’s decision but most of his fans were supportive. He now posts regularly about his faith and still seems to be a firm believer.

6. He Had A Voice Acting Role

The 1992 animated movie Bebe’s Kids has become a cult classic in the years since its release. When the movie came out, Marques was still at the beginning of his career and wasn’t known to many. However, he still landed a voice role in the film as Kahlil, one of the main characters.

When you think of a shy person, you probably envision someone that avoids excessive attention at all costs. However, shyness can take on other forms. Marques Houston has spent most of his life in the spotlight. Despite being a professional entertainer, Houston still considers himself a shy person.

8. He Likes Writing Music For Other Artists

9. His Mom Passed Away When He Was A Teenager

When he was just a teenager, Marques had to face the biggest tragedy of his life. His mother, Carolyn Houston, passed away in 1997 after a battle with cancer. Houston dedicated the 2001 album, IMx to his mother. In the liner notes, he said, “To my mother Carolyn Denise Houston, I want you to know, if you are watching me or not, that I miss you, I think about you all the time, and you are always in my thoughts, mind, and heart.”

10. He Is Working On New Music

It’s been seven years since Marques released new music and lots of his fans are wondering if and when he’ll be back. The good news is that it looks like he’s back in the studio doing his thing again. Unfortunately, he hasn’t provided any details on his next project.