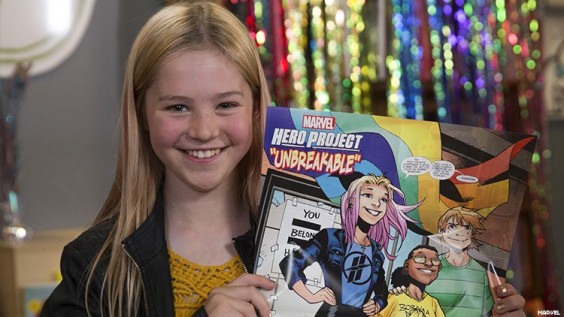 Without rancor, prejudice, bias, or anything else with negative connotations, it’s going to be interesting to see how the 2020s shape up as we roll into them within the next month, and one reason for this is due to the continued rise of the LGBTQ community and now, the fact that Marvel comics has revealed its first transgender hero. While Marvel has been including several characters that skirt along the LGBTQ spectrum here and there throughout the years this is their first openly transgender hero that has graced the pages of her own comic book and has been seen to make such a tremendous impact. The Mighty Rebekah is an inspiration to many individuals as Jessica James of We Got This Covered talks about and as you can imagine a lot of comic book lovers that are a part of LGBTQ community might be just a bit excited by the news. The community has been covered in the comics throughout the years but it does appear as though its being given a larger voice now as more and more people are advocating the inclusion of those that want to be seen for who they are and what they believe in. Given that Marvel is a big very diverse universe it is easy to believe that such a thing can happen without too much controversy among fans.

There is definitely resistance to the idea as a great deal of time has been spent developing a world in which it’s implied that the LGBT community exists but is hardly ever shown to be represented. There have been heroes that have been gay throughout the history of Marvel comics and many images that suggest that some characters are bi or somehow inclined towards relating to members of the same sex. In many cases however this has been met with resistance since fans have wanted their favorite heroes to stick to their own source material and not deviate in any way. But of course many would argue that fiction being what it is, the narrative is capable of changing whenever it really needs to or to fit the ideal of those that want to see something different. It’s enough to make a person’s head spin really when you consider what is desired from person to person, but in the world of fiction, whatever makes people happy and whatever makes money are kind of at odds now and again. Some people will no doubt love The Mighty Rebekah while others might speak out openly against the hero and the person that serves as the inspiration. The fact is the being human makes us imperfect and not always amenable to new ideas that challenge our old beliefs. When it comes to Marvel and comic books however, it might be time to loosen some of those old ideals and let them expand a bit, if only to insure that we’re not closing ourselves off to characters that might be highly entertaining and more enriching in several ways. Daniel Reynolds of Advocate has more to say on this.

Perhaps it’s because many folks think of those that don’t conform to a hetero way of life as sexual deviants that are out to destroy the values of those that stick to the male-female relationships and ideals, or maybe it’s something else. Staying away from biological and philosophical discussions at the moment, this is a comic after all and while it does represent what people want to see in fiction and how they feel about being represented in real life, it’s an inspiration, not a call to the demolition of traditional values. In many cases, transgender individuals do carry many of the same traditional values as others, minus the need to identify as the sex they were born as. It’s a long, drawn-out conversation that’s best left for a different site, as here we’ll gladly talk about Marvel’s decision to go forward with this and give trans individuals a bit of hope that they will continue to be represented in some way in a medium that many people still enjoy. While there is still a good deal of resistance in entertainment no matter how much the LGBTQ community is being showcased in movies, TV, and literature of all types, the community is still coming up in a big way and continuing to make their way into the different markets so as to show people just what can be done with enough perseverance and patience.

One thing that’s clear is that the LGBTQ community is making a bigger and bolder push into entertainment, and thus far it’s been seen to be accepted on several fronts and only argued over on others. Something to remember is that while it’s different, it’s not without value and it does help others to feel inspired when they see that they too are being represented by characters that share their lifestyle and experiences.