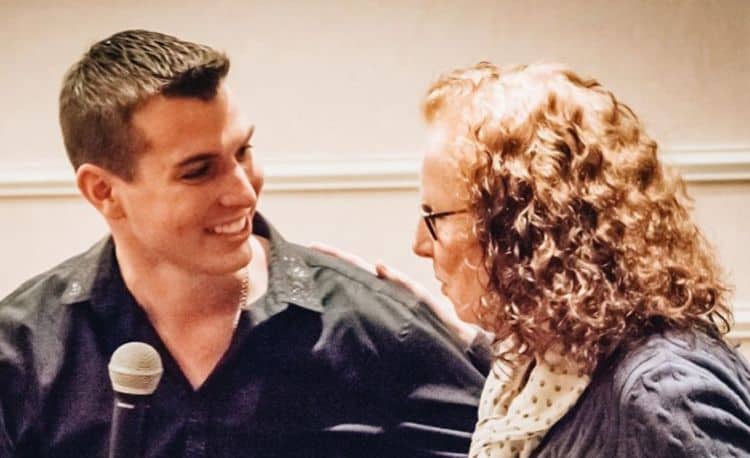 Matt Fraser is a psychic who speaks to the dead for a living. Fans claim he’s incredible and knows things he couldn’t possibly have ‘figured out’ randomly. Meanwhile, his detractors have more than a little to say about hot and cold reading tactics, which are certainly not evidence of paranormal activity. Regardless of which side you fall on, Fraser is undoubtedly a fantastic showman who knows how to hold an audience’s attention. With his new show, Meet the Frasers, coming out on E! we decided it was time to take a look into the fascinating life of this psychic star. Here are ten things you didn’t know about Matt Fraser.

Have you ever wondered if you might be psychic? Matt knows that plenty of people have the talent if they could just unlock it. Hence he wrote the book on the subject, literally. In 2012 Fraser published The Secrets to Unlocking Your Psychic Ability. His new book, When Heaven Calls, is due to drop this year, and he has more planned for the future, including a children’s book.

What does an excellent psychic reader who can talk to your dead relatives get paid? Well, that varies a great deal from one person to the next. What you pay a street psychic somewhere like New York or New Orleans isn’t the same as what you’d pay for a private reading from someone like Matt. However, according to the Skeptical Inquirer, he’s been paid as much as twenty thousand dollars for a live performance. That’s a substantial income off of a single show, but Matt is very good at what he does.

3. Unbelievers in the Family

Many people believe in ghosts, and all forms of psychic powers and swear by them. Then again, some don’t think any supernatural activity is real. However, most people fall somewhere between the two extremes. Even in a family with at least two psychics, not everyone believes. According to EOnline, Matt’s sister is skeptical at best. His father also doesn’t believe in the powers Matt and his mother/manager claim to possess.

The New York Times is known for its serious approach to reporting. They’ve done more than a few stings over the years to help expose frauds in different forms. In 2019, they decided to do a sting on psychics and turned up some mixed results. Matt was one of the prominent psychics they targeted. With fake Facebook profiles and backstories, a group of reporters went to his show to debunk his activity. However, Matt never chose them out of the audience.

Matt Fraser has a big, bold personality, and minimal brain-to-mouth filter, or at least no care about what others think of what he says. He’s not afraid to overshare in front of the whole world. When his girlfriend said they’re the perfect couple, he responded that it wasn’t quite ‘perfect’ because “…I still can’t s–t in front of her.”

If that sounds like something a serial killer would say, it is. Unfortunately, it’s also what the Pope might say, so that’s hardly a definitive indicator of anything. Regardless, Fraser believes his talent is a calling from God. His mother shares the gift, and Matt says his grandmother did as well.

7. Not a Canadian Hockey Player

In a world with nearly eight billion people, a lot of us share names. In Spanish, this is known as a tocallo, a person of the same name. Usually, it’s not a problem to share your name, but when people start to get famous, it can cause some confusion. We’re not sure if Matt Fraser the psychic and Matt Fraser, the Canadian hockey player are related, nor if they ever google themselves. However, it’s noteworthy that this Matt Fraser is not a hockey player from Canada, and he never has been.

Matt Fraser has a wealth of personality, and he seems like a very nice guy who genuinely cares about people. Before he ever got into professional psychic reading, he trained first as a physician assistant and a paramedic. Unfortunately, being a first responder doesn’t pay as well as being a professional ghost whisperer. Moreover, the fashion choices are more limited, so it ultimately wasn’t the right fit for Fraser. Though the handsome psychic would probably look just as good in scrubs, or conservatively dressed for a medical office, he’s found his niche, and it looks good on him.

Medicine and otherworldly encounters aren’t the only things Matt has done for a living. According to the Providence Journal, the fashionable Matt once worked in a beauty parlor. However, it’s noteworthy that during his time there, he also did psychic readings in the shop. Apparently, long before he was a recognizable face in the pro-psychic world, Matt was working more modest venues.

Matt Fraser isn’t just ‘good’ or ‘well known’ when it comes to being psychic. In addition to doing cameos on reality TV and getting his own show this year, Fraser has been recognized before. PJstar.com says that OM Times Magazine once named him a “Psychic Superstar” and in 2012 he received an award as “Best Esteemed Psychic in America.” We didn’t even know there was such an award until we heard Matt had one. We’re hoping to see it in a trophy case somewhere on Meet the Frasers.

With a huge personality and a talent for showmanship, Matt Fraser has made a place for himself among rising reality stars. It doesn’t matter what you believe about psychic powers to watch the show. When it comes to entertainment, Matt has a unique method, but he’s very good with an audience. We’re certainly looking forward to seeing more of him this year when Meet the Frasers airs.