Home
TV News
Meet The Cast of AMC’s “The Son” 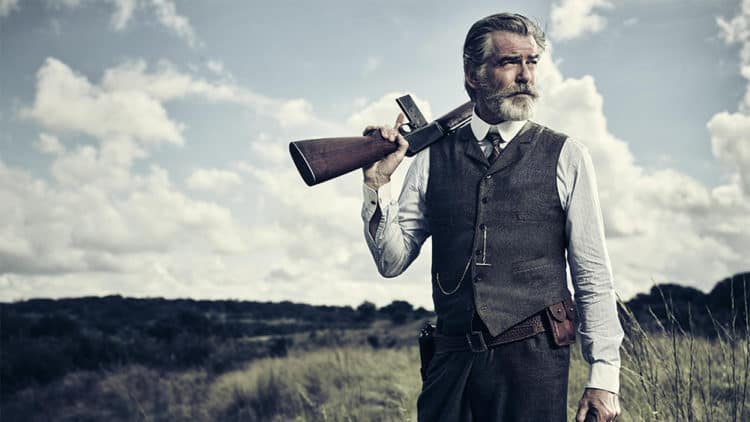 On April 28, 2017, ABC premiered the western drama, The Son. Based on Phillip Meyers 2013 novel of the same name, the show recounts the rise of America as a global superpower through the eyes of a Texan oil family. From the Comanche raids of the 1800s through to the hay days of the 1900’s oil boom, The Son tells the hard, often bloody story of the McCullough’s, a family as violent and ruthless as the lands that surround them. Within less than a month of the premiere, ABC had commissioned the series for a second run. The 2nd season, which will also be it’s last, premiÃ¨red on April 27, 2019, and has proved no less enthralling than the first. To find out more about the show’s stellar cast, keep reading.

Taking the role of family patriarch and Texan cattle baron, Eli McCullough, is Irish actor Pierce Brosnan. Since rising to international attention in the TV series Remington Steele in the 1980s, Brosnan has enjoyed remarkable success as an actor, with career highlights including a supporting role in Mrs Doubtfire (1993), and starring roles in Mamma Mia (2008), The Ghost Writer (2010) and The November Man (2014). Despite his numerous successes, Brosnan is perhaps best known as Timothy Dalton’s successor and Daniel’s Craig predecessor in the James Bond series of films. Brosnan’s first outing as Bond was in Goldeneye (1995). He subsequently went on to appear in The World is Not Enough (1997) and Die Another Day (2002), before confirming his departure from the franchise in 2005.

Playing the young Eli McCullough is Jacob Lofland, a 22-year-old actor from Briggsville, Arkansas. Prior to his casting in The Son, Lofland was best known for appearing alongside Matthew McConaughey and Tye Sheridan in the 2012 feature, Mud. Other film credits include Owen Briggs in Little Accidents (2014), Aris in Maze Runner: The Scorch Trials (2015), and Daniel in Free State of Jones (2016). He’s also enjoyed success with the recurring roles of Kendal Crowe in Justified (2014) and Colby Pitt in Texas Rising (2015).

Taking on the role of Eli’s youngest son, Pete, is Pete McCullough, an English actor whose list of credits include the romantic period drama, Poldark (2015-2016), fantasy-adventure series, Atlantis (2015), hospital drama Holby City (2012), and the romantic fantasy, Beauty and The Beast (2017). Outside of TV and film, Garrett is a keen athlete and, as the Metro notes, even represented Team GB in American Football before moving into acting.

Starring as Comanche tribal chief Toshaway is Native American actor Zahn McClarnon. After beginning his career in a local production of Jesus Christ Superstar, McClarnon moved onto TV success with the role of Running Fox in the 2005 miniseries, Into the West. He’s since enjoyed roles in Not Forgotten (2009), Resolution (2013), and Westworld (2018).

Playing Pete’s wife Sally McCullough is Jess Weixler. Juilliard graduate Weixler began her career with small roles in TV shows such as Guiding Light (2003), Hack (2003) and Everwood (2004). In 2007, she landed her breakthrough role in Teeth, her performance in which earned her the Special Jury Prize in Dramatic category at the Sundance Film Festival. In 2013, she starred in the recurring role of Robyn Burdine in the CBS show, The Good Wife. She’s since enjoyed success with Money (2016), Who We Are Now (2017) and Deception (2018)

Taking the role of Pete’s childhood friend, MarÃ­a GarcÃ­a, is Mexican actress and producer Paola NÃºÃ±ez. NÃºÃ±ez has been active in the industry since she was 12, appearing in numerous telenovelas in her home country. She made her transition into English speaking roles in the 2015 drama, Runner, and is next set to star on the 2020 action comedy film, Bad Boys for Life, a sequel to 1995’s Bad Boys and 2003’s Bad Boys II. Outside of acting, NÃºÃ±ez is an active environmentalist and has been a spokesperson for Greenpeace since 2007.

Taking the role of headstrong Prairie Flower is Elizabeth Frances. The Japanese born actress is best known as Angela Maryboy in the Robert Redford produced Drunktown’s Finest, as Bad Penny in Her Story, and as Lilly Rowan on Netflix’s Love. Frances was born on a military base in Japan but raised in San Diego. As IMDB notes, after graduating from Cal Arts, she began her career on stage, performing in various productions for institutions such as Center Theater Group, La Jolla Playhouse, Los Angeles Theatre Center, Shakespeare Santa Cruz, Native Voices, and the Kirk Douglas Theatre Offscreen. In recent years, the talented actress has begun making the transition into producing, with her first feature Coastin On E currently in production.

The role of Eli’s granddaughter/ Pete’s daughter is played by young actress, Sydney Lucas. Despite being only 16 years old, McCullough has already developed a reputation as one to watch, with multiple credits already in the bag for theatre, TV, and film. At the age of 10, Lucas became the youngest person to ever claim the OBIE Award, which was awarded for her stellar performance as Small Alison Bechdel in the off-Broadway production of Lisa Kron’s and Jeanine Terspori’s musical, Fun Home. She’s since continued her awards success, claiming a Theatre World Award (again for her performance in Fun House), along with numerous nominations for Tonys, Grammys, and others. In addition to her work in the theatre, Lucas has worked extensively in TV and film, with most notable credits including Girl Most Likely (2012) and The Skeleton Twins (2014).

Lois Smith as Jeannie at age 85

Playing the older Jeannie McCullough is entertainment veteran, Lois Smith. The 88-year-old actress has been active in the industry since 1952, building up a solid portfolio of work in TV, film, and theatre. Notable works include East of Eden (1970), Resurrection (1980), Fatal Attraction (1987), Fried Green Tomatoes (1991), How to Make an American Quilt (1995), Dead Man Walking, Twister (1996), Minority Report (2002), The Nice Guys (2016) and Lady Bird (2017). Her work in TV has earned her a Critics’ Choice Television Award for Best Guest Performer in a Drama Series nomination for The Americans, while she’s also enjoyed an Obie Award for Best Actress, an Outer Critics Circle Award, a Lucille Lortel Award, and a Drama Desk Award for her extensive work in the theatre.