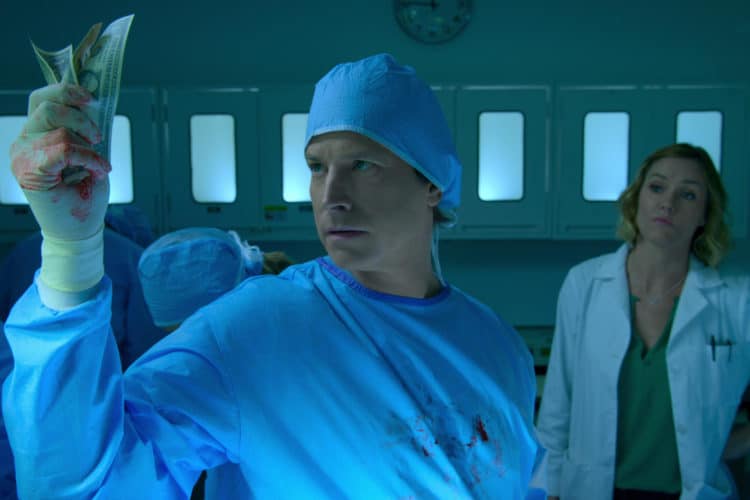 Last month Netflix released the official trailer for the Childrens Hospital “spin-off”, titled Medical Police.Â  Fans need not worry, the twisted comedy looks to be just as outlandish as the original series. We even catch a glimpse of Rob Corddry in his clown makeup as Dr. Blake Downs. The new installment catches up with Dr. Lola Splatt and Dr. Owen Maestro, who are now down in Brazil and find themselves embroiled in a thrilling adventure of hysterical proportions. With this new adventure, comes a new score by Childrens Hospital composer Matt Novack. Having worked with these creators and characters for seven seasons already, we are looking forward to hearing what he has in store for Medical Police. In the below exclusive interview he discusses the upcoming show and more.

-What was the initial appeal of Medical Police for you?

-In a few words, how would you describe your score for Medical Police?

–Medical Police is a streaming series. A lot of composers who score streaming shows say it feels like they are scoring one long movie. Did it feel like that for you?

Absolutely, especially with the show itself having one season long arc.Â  The story, characters, and the score all evolve together over the course of the season.Â  It’s much different then tackling a different parody of something practically every episode.Â  Plus, even though we worked on one episode at a time, we would still bounce around a little bit.Â  It wasn’t like a typical TV schedule where everything from spotting, to delivery, to mixing would be completed and signed off on before moving on to the next episode.Â  Most of the final mixes where done together, closer to the end of the whole schedule, so that meant the scoring process was a bit more fluid and closer to that of a film.

-About how much music do you create for each episode of Medical Police?

I think about 14 minutes, on average, for each episode.Â  Some are denser than others and the season finale is pretty wall-to-wall with almost 20 minutes of score.

-What do you think viewers are going to be most surprised about with Medical Police?

The thing that personally surprised me the most is how much I bought in to the stakes of the outbreak and the trials of the characters.Â  It’s a testament to how great the performances of Erinn Hayes, Rob Huebel, and the rest of the cast are.Â  No matter how bonkers and completely absurd the problems, obstacles, and their solutions were, they did such a brilliant job of playing it dramatically.

-In a previous interview you said in high school you would buy a lot of film score CDs. What were a few scores that really made an impression on you at that time?

Well, of course Star Wars.Â  I’m sure everyone says that as it’s practically impossible to find any composer that wasn’t inspired by those scores. Especially those like myself where it sparked that initial love of music as a whole, not just film scores.Â  Besides that, James Horner’s Star Trek II: Wrath of Kahn was another major one.Â  I was also influenced by the other greats at the time: Alan Silvestri, Jerry Goldsmith, Danny Elfman, and others like Williams, all have countless brilliant scores that it’s hard to choose!

But thinking back on it, I think Elliot Goldenthal has had the biggest impact on me.Â  His scores for Interview With the Vampire, Sphere, and even the Final Fantasy film are brilliant.Â  Plus, his concert work, “Fire Water Paper” is still to this day one of my favorite pieces.

-Which do you find is more challenging to score, horror or comedy?

They both have different challenges, and broadly speaking they’re probably about the same in terms of story-telling, but specifically this style of absurdist comedy is a little more challenging, I think, because the comedy comes out of everyone playing these ridiculous stories as straight as possible.Â  So in a sense, they require a little bit of double-duty; you have to write a believable non-comedic score, whether it’s drama, horror, action, romance, etc. but then also be aware of the comedy so you’re enhancing the comedy in the best way for the scene, not stepping on jokes, as well as riding a fine line and not playing things TOO seriously.Â  It can be a bit more of a balancing act.

-You scored the dark comedy Childrens Hospital. Did you have a favorite episode you scored from that series?

There are so many, but the final episode “The Grid” is definitely a stand-out.Â  We didn’t know it was going to be the finale of the whole series at the time we worked on it, but in retrospect it really does feel like a perfect ending for the show.Â  Plus, I’m a sci-fi nerd, as you can probably tell, so it was a great opportunity for me to write an interesting score in that genre.

-Are there any other shows you are currently watching that the score stands out to you?

I was really blown away by Murray Gold’s score to Years and Years.Â  When I was in the thick of scoring Medical Police, I’d take a break to go into the house (I have a home studio) and my wife would be watching an episode so I would catch these cues and scenes out of context that stopped me in my tracks.Â  Once I finished Medical Police, I had to go back and watch it from the beginning!Â  We also just binged the second season of Killing Eve and that song-score approach is such a brilliant and unique way to add character.