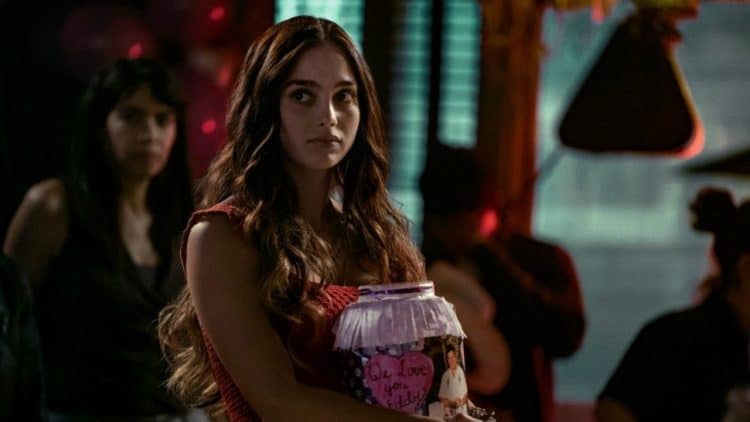 In less than a decade, Melissa Barrera has gone from being a reality TV star to being an internationally known actress. In 2011, she appeared on the Mexican reality show, La Academia. The show features a group of people who live in a house together while taking classes in the arts (dancing, singing, acting, etc). Although most people still don’t take reality very seriously, it’s helped launch Melissa’s career. She is now the star of Vida, a series on Starz that tells the story of two sisters who try to rebuild their relationship after returning to their childhood home. The show has introduced her to American audiences and shown that with the level of talent she has, she is definitely here to stay. Keep reading for 10 things you didn’t know about Melissa Barrera.

1. She Studied Theater At NYU

Going far away for college isn’t always an easy thing to do; especially when ‘far away’ means that you’ll be moving to another country. However, Melissa knew she wanted to be an actress and wanted to put herself in the best position as possible. She left Mexico at 18-years-old to study at NYU’s Tisch School of the Arts.

2. She Grew Up In A Very Conservative Environment

If you’ve ever seen Vida, you’ll know that Melissa’s character on the show, Lyn, is anything but conservative. But Lyn’s life couldn’t be any different from what Melissa grew up around. Melissa was born and raised in Monterrey, Mexico which is know for being a very religious and conservative area.

3. She Plays The Guitar

If self isolation has been good for one thing, it’s the fact that it’s given people a lot more time to do the things they normally don’t have time to do. Melissa Barrera has been using this period to learn the guitar. In just a short time, she’s been able to get pretty good. She can even sing and play at the same time, which requires a lot more coordination than you might think.

4. She Wanted To Act On Broadway

Acting may be her calling, but Melissa also has a great eye for fashion. She enjoys expressing herself through her personal style and she’s got a knack for putting cute outfits together. She may not be a model, but she certainly could be.

6. She Hopes To Break Stereotypes

Melissa Barrera understands the challenges that come with being a Latina in the acting world. She hopes to break stereotypes throughout her career and create more opportunities for the next generation of Latina actresses. How does she plan to do this? She told Schon, “By being more picky about the roles that I do and the stories that I chose to tell. That is a sure way to contribute to the change we need in the industry. I also want to start producing content. That’s another way to ensure that the stories that are being told about the Latinx community are the kind of representation we deserve.”

7. She Has Three Homes

The demanding nature of her job requires means Melissa has to be close to where all the action happens. At the moment, that means that she has three separate homes: one in Mexico, one in New York, and one in Los Angeles.

8. She Had To Return To Mexico After College

Melissa’s plan may have been to stay in New York forever, but life had other plans. After finishing school, she had to return to Mexico because she was not a United States citizen and was unable to find work. Although she was reluctant at the time, the move actually ended up being one of the best things for her career. After moving back to Mexico, she eventually became a telenovela star.

Being on the red carpet is one of the things Melissa has really come to love about her job. She told The New York Times, “I’ve come to see it as playing dress up for another role – the red carpet one – where I take on different characters,” she said. “I let my glam team make the decisions, and same with clothes. It’s really fun when you see it that way, like a game.”

I hate to break it to anyone out there who may have a crush on Melissa, but she is off the market. She is happily married to Paco Zazueta. The couple tied the knot in 2019. According to his Instagram bio, he is an artist.