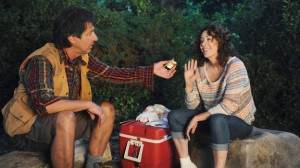 The Heck family is back for a third season of The Middle, but before the kids head back to school they need some forced family fun. The two-part season premiere flipped back and forth between the current timeline of the Heck family camping trip, and a flashback of Frankie and Mike’s honeymoon where we learn why Frankie hates camping. It’s in the flashback that we see Patricia Heaton reunite with her former TV husband, Ray Romano. He’s the reason she hates camping.

The episode opens as everyone heads out of the house on the first day of school, and they’re so worried that they’re going to miss each other that they promise to call throughout the day and depart with a family hug. The end of the episode shows us how they got to this loving state. In a brief recap of their summer, we learn that Frankie and Mike rarely saw the kids. Axl was working as a lifeguard, Sue was hanging out with Carly, and Brick was–you guessed it–at the library. Frankie and Mike spent their summer collecting mail and babysitting pregnant hamsters for all the families that went on vacation. Feeling guilty for not spending more time with the kids, Frankie convinces Mike that they need to go on a quick, cheap family vacation before school starts. Mike suggests camping, but Frankie protests by reminding him that the last time they went camping was for their honeymoon and it was the worst night of her life. We’ll learn why later, but since it’s the only vacation they can afford, Frankie agrees to go.

The kids aren’t so easy to convince, so Frankie declares it forced family fun and they pile into the car. It feels like Chevy Chase should be driving as they set out for a weekend of antics.

Once again, the blue snack bag fails to make it with them on their trip. This means there is nothing to do in the car except drive each other crazy. Brick reads his Indiana tour book instead of looking out the window at the things he’s reading about. Sue is starting high school this year and can’t stop asking Axl very pertinent questions, like whether or not Goldfish crackers are an immature snack and if the cafeteria is called the “caf” (because it was when Hannah Montana went to high school). Axl lays out the rules for Sue entering high school. “No looking at me. No talking to me. No acknowledging me in any way. If an emergency happens, like mom or dad dies, or something, you can relay the message to Sean and he will let me know and I will see you at the funeral.” Frankie suggests they sing 99 Bottles of Beer. It doesn’t fly.

There’s a smell. Axl forgot his shoes. Of all the clothing types to forget, shoes may be the most difficult, but Axl succeeded. Waving his dirty, leathery feet in the air, he claims that camping will be like going on vacation on the bottom of his foot.

As the kids are going crazy in the backseat, we go to our first flashback.

Frankie and Mike have just been married and they are setting out on their honeymoon camping trip. Frankie is giddy about being a wife and eventually being a mom. They talk about having two awesome kids in the backseat someday. On this trip, there is a quiet case of beer there instead.

Back in the current timeline, the Hecks have arrived at their destination and Frankie is commanding a bug spray and sunscreen assembly line. The kids choke on the spray as she reminds them to “shut their head holes.” Sue asks Axl if there’s special high school ruled paper, because she’s seen college ruled paper, and he convinces her that the school is very strict on the type of erasers they use (pink on one side, grey on the other.)

Against Brick’s will, he and Mike go fishing. Brick asks if it was a beautiful day on his parents’ “bad” honeymoon, and we flashback to a downpour as they are putting up their tent. Back in the current timeline, Sue asks Frankie if her honeymoon was bad because of the rain. Frankie avoids the question, and Sue tells her that she’s nervous about high school because her friend Carly is practically an adult now that she has a boyfriend. Sue says the only time she’s felt like an adult was the time she filled out the Cosmo sex quiz. Frankie assures Sue that she will do as great in high school as she always does. Gulp.

Brick and Mike argue over whether it’s better to read or experience. Mike tells him to think of experiences as pre-books, because nobody ever wrote a book about reading a book. Brick says they actually did write that book, but when Brick catches a fish, he’s excited to see in person what the beginning stage of a fish stick looks like. His description of fishing is spectacular: “It’s a lot like standing in line in the grocery store, only holding a stick.” When they arrive back at camp with a bunch of fish, Brick wants to invite some neighbors to share but Mike says the fish is just for them. Frankie questions why it’s just for them this time around, and we go to the next flashback. 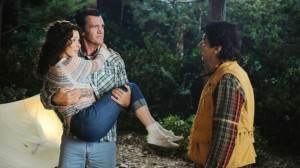 The honeymoon pup tent is set up, but just as Mike is about to carry Frankie over the threshold, they hear someone approaching from the woods. Ineffective creepy music plays (hey, it’s The Middle). Ray Romano emerges from the trees as Nicky, the manager of Mike’s old basketball team, although Mike doesn’t remember him. He’s the reason their honeymoon turns sour: he asks about Mike’s “smokin’ hot” ex-girlfriend, he makes Mike feel guilty for being the star basketball player while he mopped sweat, he offers them wine from a straw in his backpack, and he doesn’t leave when he realizes it’s their honeymoon. He says to Frankie, “You look really familiar. Have we met before?” Cue the smiles from all the fans of Everybody Loves Raymond.

In the current timeline, Axl put a chip clip on Sue’s eye while wearing cereal boxes for shoes. Somehow Sue is the dork. Frankie makes them all play a board game. In what was the funniest scene in the episode, they pull out a Monopoly box that contains a mixture of pieces from every classic board game imaginable. There’s only half a game board, no dice and no property cards, but there’s a spinner, Scrabble pieces, a battleship, a checker, a Clue card, a dirty sock and more. “I just sunk your Yahtzee!” 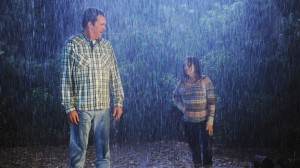 As the family fun breaks down, Frankie fights with Mike about how awful camping is. In another flashback, Nicky continues ruining their honeymoon but offers Frankie a s’more when he realizes she’s upset. He’s finally about to leave when the rain pours down and Mike offers for him to stay. Frankie and Mike have their first married fight. In the current timeline, Mike reminds Frankie that their awful honeymoon was 19 years ago. Frankie says she can’t let it go because she tried to make up with him, but couldn’t because something happened. Returning to the flashback, Frankie accidentally kisses Nicky in the dark in the tent. Nicky says, “You know in an alternate universe, you and I could have been very happy together.” More smiles from fans of Ray and Debra Barone.

This is the first Mike has heard of the kiss, so he’s upset and they all go to bed. Sue comes to Frankie in the tent to tell her that she’s finally “matured.” Frankie goes along with her that this is exciting news, until they hear a bear and she remembers that Brick told them bears are attracted to menstruating women. They all run to the car, followed by the bear, but they are missing Brick. Sue exclaims, “Oh no! He’s so little he’s going to be like an appetizer!” But Brick is in the car, reading about stars instead of gazing at them. He reminds them that bears don’t like loud noises, so they finally sing 99 Bottles of Beer and eventually make it home safe.

Back to where we started, it’s the first day of school and everyone has bonded from the bear incident. By the time the kids make it down to the sidewalk, Axl refuses to take Sue with him to school and things are back to normal.

The Middle is always a nice way to kick off ABC Wednesday night comedies. I’m particularly looking forward to seeing what trouble Sue can get herself into in high school. Should be a fun year!

The Middle airs Wednesdays at 8/7c on ABC. 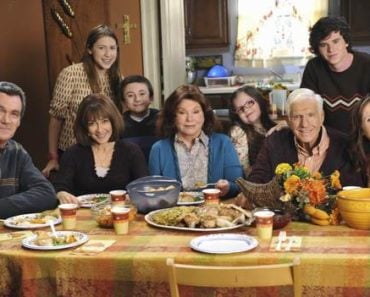