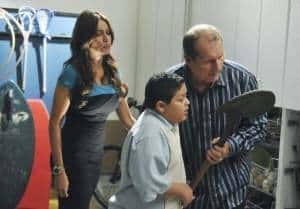 If you missed my thoughts on last week’s Modern Family? Catch up with my review here.

I have found the aired episodes of this second season to be alright, for the most part, none of them have really jumped out at me as the laugh-a-minute romps that characterized the best comedy the show has to offer (I thought “The Kiss” was a fantastic episode, but not necessarily for it’s laugh quotient). This is fine because as I have often said, even the not so good episodes of Modern Family are better than most of the other schlock that is on television. I am very happy to say that in my opinion, “Unplugged” completely delivered the funny.

The stories kept the three families separate for almost the entire episode (there was some phone interaction between Claire and Mitchell, and Cameron and Mitchell showed up at the Dunphys house briefly at the end), and while this sometimes leads to the less successful episodes, here, each of the plots was so full of jokes that I couldn’t help but love what I was watching. Further, my main pet peeve about the show, the treacly music-backed voiceovers that teach the audience some Big Important Lesson, was also absent, allowing the viewer to just enjoy the individual stories for what they were, and not be concerned about some overarching message.

Modern Family doesn’t always need to have a lesson, or really, even a through-line. As I have discussed before, when the show tries to shoehorn a theme into disparate plots, and the execution isn’t perfect, the episode rings hollow. With comedies, it can be enough to not have a theme, and just put some very funny stories together on screen. That is what happened in “Unplugged.” Yes, one could argue that there was an underlying theme about accepting who you are and your limitations, but, to me, this didn’t feel fleshed out enough to truly be considered a through-line for the episode. Rather, this is what I came up with when I purposely searched for a unifying theme.

What the viewer received instead were some very funny moments derived from the Dunphys’ attempt to kick the electronics habit, Gloria’s battle with the neighbor’s dog, and Cameron and Mitchell’s attempt to get Lily into a great school. Each plot felt fully realized and was chock-full of the best comedy the show has to offer. There was great dialogue (see below), perfectly directed situational comedy (the reveal of the handicapped lesbian mother), and some very funny physicality (Claire fighting with the automated airline service and then knocking over the vase with the telephone cord). When all of these elements are clicking, and there is no awkward conclusion to sound a sour note, Modern Family is one of, if not the best comedy on television. That is what happened this week. “Unplugged” was my favorite episode of the season so far, and it’s great to have the show back at its highest quality.

Before I get to the Best Lines of the Week, I just want to point out that Claire was making flight reservations for Orlando. Is it possible that we’ll see a family trip to DisneyWorld this 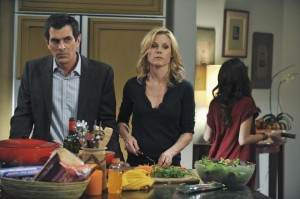 season? Man, that could be a lot of fun. Also, Eric Stonestreet’s Native American impersonation, while hopefully not offensive to anyone, was one of the funniest things I have seen in a long time. It was so wonderfully absurd. OK, onto the quotes:

Jay (in response to Gloria’s complaints about the neighbor’s dog): How can one dog keep you up when in Colombia you slept through cock fights and revolutions?

Cameron: Boobs Laurie or Adult braces Laurie?
Mitchell: Great Shoes Laurie.
Cameron: Ohhhh…I love her! (I like to think that this was a reference to Busy Phillips, who plays Laurie on Modern Family‘s lead-out show, the hilarious Cougar Town)

Mitchell: We have to get her [Lily] into school or she’s going to fall behind.
Cameron: Don’t you think I know that?
Mitchell: This is perfect. Leave it to the gays to raise the only underachieving Asian in America.

Alex (after being told she can’t use the internet for a week): How am I supposed to do my homework?
Claire: Like I used to…
Phil: With a chisel and a piece of stone. (Claire stares at him) Hey, I can’t unplug my funny bone.

Jay (to the camera): Gloria’s grandfather and uncles were all butchers, so she’s always had a certain comfort level when it comes to…killing. One time, we had this rat…
Gloria (in a while dress; in flashback): What?!? First you smash it (she smashes the rat with a shovel), then you cut the head off!! (She brings down the pointy head of the shovel with force).
Jay (in voiceover, whispering): It meant nothing to her.
Gloria: I go to church now.
Jay (to the camera): She left the head out there to send a message to the other rats!

Mitchell (seeing another mother and son at the Billingsley Academy): Single white mother, black child…
Cameron: So what? Lily’s Asian, we’re gay. In the school admissions poker game, we’re the winning hand.
(A Middle-Eastern woman in a wheelchair enters and is introduced as the white woman’s “partner.”)
Cameron (to the camera): Disabled, interracial lesbians with an African kicker?!?
Mitchell (to the camera): Did not see that coming.

Alright, that’s how I saw “Unplugged.” What did you think of the episode? Did you see an important overarching theme that I’m missing? Do you care if one is present in the first place? Where do you think this episode ranks this season and within the series? Please be sure to leave your comments below, and be sure to check out pictures for next week’s episode, “Halloween.” I’ll have a review of that episode (and Haley’s hysterical Mother Teresa costume) next week. Until then, I’m off to throw a dodgeball through a piece of plywood.