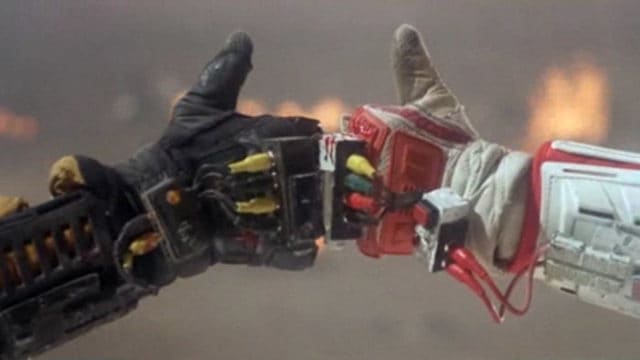 So be honest, do you even remember this film? I can still recall begging my parents to take me to see it and them saying “nah”. We went to see another film that made me forget about this one altogether until a short time ago. Robot Jox was perhaps one of the most hyped-up films of its era and in truth was considered to be one of the top of the line special effects movies of the time period.

Now that we watch it again we can see that the special effects are only a few leaping strides away from clay-mation and the action is in fact kind of terrible, but hey, it was the beginning of the 1990’s, great acting was still a hit and miss thing with most up and comers of the day. Despite the old school tech and a plot line that couldn’t challenge today’s grade-schoolers this movie still has some merit for the simple fact that it was a bit of innovation in its day that was enough to rival the Transformers for sheer ingenuity.

Trust me, find this screen gem and dust it off before you discount it. It might surprise you a little and here’s why.

Think about it this way, without Robot Jox we might not have had a live action Transformers or Pacific Rim.

This is strictly alluding to the fact that all three films feature gigantic robots that are capable of dishing out maximum amounts of damage mind you. Their story lines are entirely different and the fact is that only Pacific Rim is really like Robot Jox in that the giant robots need a pilot to operate them. But still think about it, if not for innovations like this for directors to watch as kids or adolescents and dream about, where would our favorite films of today be? So Robot Jox wasn’t the epic hit that a lot of us thought it would be. How many of the movies in this era were?

There is something to be said for nostalgia.

Even when you go back and watch your favorite movies again you tend to forgive the glaring errors and surprisingly bad acting that you don’t recall from your youth. It’s easy to impress a kid remember, and none of us were any different in that regard. We liked the big explosions, the loud, over the top action and obviously the in your face attitude that was just ramping up in the 90’s. Everything else at that point was just noise that we endured to get to the action.

It’d be nice if wars were really fought this way.

I think Kevin Costner said it best in The Postman, “Wouldn’t it be great if wars could be fought by the a**holes that started them?” Totally Kevin, totally. Strap our world leaders into one of these over-sized tin cans and let them have at each other. But definitely install a kill switch that can be remote operated just in case.

So go on and watch Robot Jox again. As a throwback to a much simpler time in film it could make for a pleasant evening.