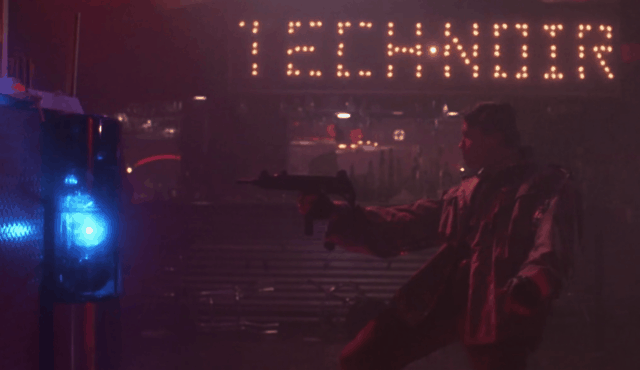 The Terminator was on television last night so naturally I watched it.Â  You don’t turn off The Terminator when it’s on television.Â  Especially when it’s on a movie channel and is uncensored.Â Â  When I got to the “Tech Noir” scene I was already pumped from the 80s music the movie had played up until that point.Â  But then that “you got me burning!” song starts rocking in the club and you kind of wish you were there.Â  You know, except for the part when a Cyborg starts shooting with a machine gun.Â  Here’s some stuff you might not know about Tech Noir.

Tech Noir was a club located on Pico Boulevard in Los Angeles, next to the Super C Ranch Market. On the night of May 12, 1984, the club was the site of a shooting as a Terminator from the future attacked, attempting to kill Sarah Connor. He almost succeeded, until Kyle Reese saved her life. The cover charge at Tech Noir in 1984 was $4.50. The phone number of the pay phone at the club was 555-9175.

P.S. here’s the awesome scene in the movie: