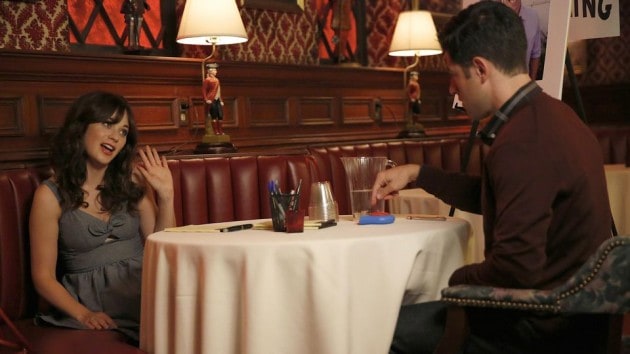 The modern world of dating has completely transformed from what it used to be. Due to the internet, social media, and the prevalence of the “hookup culture,” going out on a date with a person isn’t so much a step in the direction to a possible relationship as much as it is a gateway into a fling. Apps, like the very popular Tinder, which is mentioned in this episode of New Girl (although the show invents its own version here called “Dice”), have essentially stripped away any actual emotion from dating and replaced it a quick, easy, and completely superficial selection process that only focuses on the physical appearance of another person.

Similar to the shallow superficiality that Tinder embodies, it would have been easy for New Girl to use its central plot of last night’s episode (Schmidt teaching Jess the ways of Dice) solely as a joke machine, issuing out one awkward situation or funny punchline after another. Yet while the series does capitalize on this storyline and utilizes it to produce many of the episode’s biggest laughs, it does something more with it, which the best episodes of New Girl always do. Instead of simply mining quotable lines and gif-worthy moments from Schmidt and Jess, New Girl takes the two of them, puts them in a character-driven storyline, and allows them to have two conversations that are, without a doubt, the best moments of the entire episode.

The first of these two conversations (just like last week’s Nick and Jess convo in the season four premiere) shows just how much Schmidt cares for Jess, even if it’s in his own ridiculous, Schmidt-like way. He wants Jess to not think of someone else’s feelings for once and to go after what she wants because, to quote him, she’s the “last piece of the pie.” Schmidt values Jess very highly as a person and as a friend and think she deserves the best guy out there; his intentions are good, even if his methods and ideas are wildly out of whack with what Jess truly desires.

And that’s what brings us into the second excellent conversation of the night, where Jess makes Schmidt reconsider his purpose for dating. Schmidt looks at the women that he goes out with like a revolving tray of desserts at a buffet–he just likes to keep sampling one after the other, without really ever sticking with one. It’s only when Jess brings up the idea of finding love through dating that we see Schmidt’s expression change. He starts to wonder if this kind of constant, never-ending dating life is something that he actually wants, and he even tries to actively change his lifestyle near the end of the episode when he asks one of his Dice matches to get coffee with him, although it’s not too successful.

Both the pie conversation and the love conversation in this episode are perfect examples of how New Girl knows its characters so well and also how it can easily show that these very different types of people are such goodÂ friends. Schmidt recognizes how special of a person Jess is but describes her as a “piece of pie” in a way that only he would, whereas Jess also wants Schmidt to be happy so she brings up the idea of love because it’s something that she has always been looking for and something that Schmidt hasn’t had in his life since he broke up with Cece.

And for me, it’s these intimate, detailed relationships, which ensures these characters feel like real people no matter how cartoonish they are behaving, that elevatesÂ New Girl, making it better than just about every other sitcom on TV at the moment. These first two episodes of season four have reminded me why I love this show so much, and I just hope New Girl and its writers can keep it going throughout the rest of season.

– I know my entire review was about the main story with Schmidt and Jess, but I don’t want to neglect the hilarious B-plot that was Nick, Cece, and Coach getting stoned and then joining Winston at a party with his fellow cops. Was the whole thing stupid and goofy? Totally, but it also allowed for Hannah Simone to show off some of her comedic chops (something she doesn’t get to do as often as she should) and it let Jake Johnson babble on about random things, which will never stop being funny to me.

– Speaking of Winston, it’s Nick, Cece, and Coach that actually help him finally get his police academy nickname: Toilet. The best part of the whole thing? Winston calling out, “Flush flush, what’s the rush?” to the cops as they’re leaving. I want that to be Winston’s theme song throughout the rest of season four.

– Even though I focused on the more emotional aspects of Schmidt and Jess’s plot, it was also just as funny as the pot storyline. Zooey Deschanel’s delivery of Schmidt’s excuses were pure perfection, with my top two favorites being, “A prominent U.S. senator is trying to contact me” and “An important document has gone missing. I need to find it.”

– I want Winston to always tell his Charlotte’s Web joke at parties.

– Don’t try to lie to Nick about birds. He knows so much about them. “There’s no such thing as hummingbirds. They sing. They invented singing.”

– Jess can be a little gullible sometimes. “People tell me that and I have no reason not to believe them.”

– It’s all about the simple things in life for Schmidt. “This isn’t even champagne. It’s a super fancy salad dressing. That’s just delightful.”

– “If pot were a piano, Nick would be a Chinese nine-year-old girl.”

What did everyone else think about last night’s episode of New Girl?