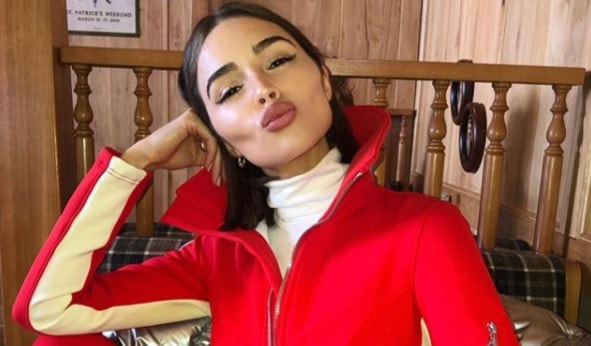 Olivia Culpo is an actress and model who was born in Rhode Island on May 8, 1992. She is also a former beauty pageant titleholder, with some of the titles including Miss Rhode Island USA, Miss USA, and Miss Universe. She first became an actress in 2014, and she is still trying to establish herself in the industry. Culpo has already managed to become a fashion icon and a role model for many women. As she is in the early stages of her career, there are still many things that people do not know about this model and actress. Here are 20 things that you probably didn’t know about Olivia Culpo.

1. Her Parents Disagreed with Her Entering Beauty Pageants

While many young women on the beauty pageant circuit have pushy parents who encourage them to enter the competitions, that wasn’t the case for Olivia Culpo. According to Entity, her parents were very against the idea of her entering the competitions and did not support her in this activity at all. This meant that she had to buy her own dress when she entered her first pageant. She took to the stage in a $20 rent-the-runway gown that had a hole in the back and was too short. Despite the dress, the judges were impressed, and she won. Despite her parents’ initial lack of support, they are now very supportive of her career.

2. She Was the First American to Win Miss Universe Since 1997

When Olivia Culpo won Miss Universe in 2012, she was the first American woman to do so since 1997. She is also only the eight American women to win the title in the history of the competition. According to Heavy, her prize for winning the title was an undisclosed salary for the year of her reign, a stylish wardrobe, a luxury apartment in New York City, and a limitless supply of expensive beauty products.

3. She is Musically Talented

Although she is known for her beauty, Olivia Culpo also has many talents. One of these is her musical ability. Culpo and her brothers and sisters were all encouraged to play instruments as children as their mother is a musician. Entity says that Culp started learning to play the cello at the age of six. She often spent her school vacations at band camp. She has continued to play as an adult and finds it therapeutic. She often plays the cello as a form of stress-relief.

4. She Has Played Cello Professionally

While on the beauty pageant circuit, Olivia Culpo traveled to many countries and this has given her a passion for traveling to new places and experiencing different cultures. She now travels for many aspects of her career. She told The Arcadia that she has loved traveling around the globe, and that one of her favorite places is India. She fell in love with the country’s kind people and rich culture. It also touched her heart to see the children living in poverty in India and she has said that she wanted to bring them home with her.

When she is not working, Olivia Culpo told The Arcadia that she likes to spend her free time cooking. She likes to try new recipes and to experiment with family favorites to create healthier versions of a traditional dish. Culpo particularly enjoys making baked goods using ingredients that are healthy alternatives. So, she used ingredients such as cocoa powder, protein powder, coconut oil, and raw chocolate. Cooking is not the only way that she likes to use coconut oil as she also uses it as a beauty product.

7. She is the Ambassador of Pencils for Promise

In 2016, Olivia Culpo was announced as an ambassador for Pencils of Promise, says eOnline. This charity was founded in 2008, and its aim is to provide better access to education in the developing world. In 2012, the charity did great things in Ghana, and they now have more than 350 schools in Ghana, Laos, and Nicaragua. This has allowed them to educate more than 33,000 people. Culpo wanted to get involved as soon as she heard about the project. She has already supported other similar projects in the past, including the Elizabeth Glaser Pediatric AIDS Foundation and the Many Hopes Foundation.

8. She Owns a Restaurant

It may seem surprising that Olivia Culpo owns a restaurant, but it actually makes a lot of sense because of her passion for food and her family’s history in the restaurant business. Although her mother is a musician, Culpo’s father was already a restaurateur. Culpo opened a restaurant called ‘The Back 40′ in Rhode Island in collaboration with her family. She is extremely proud of this business venture and is enjoying having a business connection with her family.

9. She Was a Self Proclaimed “Chubby Nerd” as a Child

Now known for her beautiful face and perfect body, Olivia Culpo was not always that way, says Newsmax. In fact, she was very different when she was growing up. Her father described her as being the nerdiest of all his five children: Peter, Aurora, Olivia, Gus, and Sophie. One of Olivia’s brothers described her as being sort of weird and really chubby. Olivia has said that she suddenly had a growth spurt and went from being chubby to lanky almost overnight.

10. She Has Italian Ancestry

With her brunette hair and olive skin, Olivia Culpo has a Mediterranean look. Therefore, it is hardly surprising that she has Italian ancestry. This is on both sides of her family. Her mother is of both Irish and Italian descent, while her father is also of Italian descent.

11. She Has Brains as Well as Beauty

She attended St. Mary Academy high school and graduated in 2010 with high honors. She was also a member of the National Honor Society. She then went to Boston University to study for a degree in communications and acting. Every semester, she made it onto the Dean’s list.

12. Her Role Model is Audrey Hepburn

Olivia Culpo has said that her role model in life is Audrey Hepburn, says Missology. She admires her for both her beauty and for her talent as a Hollywood actress. She also feels a connection to the actress because Hepburn was a pioneer in her support for UNICEF, which is a global organization that gives financial and practical support for mothers and children in poverty-stricken countries. Like Hepburn, Culpo supports charities that give aid to underprivileged children.

According to Celebrity Net Worth, Olivia Culpo has an estimated personal net worth of $3 million. She has made this money since winning the Miss Universe title. Her earnings have come from modeling, television work, and various other business ventures. Culpo is continuing to establish her career in the entertainment industry and is becoming more famous, so she has the potential to significantly increase her potential earnings in the future.

14. She is an Active User of Social Media

Olivia Culpo is an active user of social media and has amassed a large following on both Twitter and Instagram. On her Twitter account, Olivia Culpo has more than 234 thousand followers. He posts on Twitter include photos of herself at work or hanging out with friends. She also posts about the charitable organizations that she supports. On her Instagram account, she has four million followers. The photographs she posts are predominantly fashion shots of herself, although she does post pictures of herself with friends and family. On her Instagram account, she describes herself as the middle of five children who loves to cook and dress up. She also uses her Instagram account to promote her restaurant.

In an interview in June 2012, Olivia Culpo revealed that she is not a fan of beards. According to Genius Beauty, she revealed that she had a crush on Ryan Gosling. She also said that Brad Pitt had always been on her list of hot celebrities, but that he had slipped down the rankings because he had grown a beard.

She has said that keeping fit and looking good is important to her. Whenever possible, she tries to exercise in her free time. She often attends keep fit classes, including Barry’s Bootcamp, Pilates, yoga, SoulCycle, and a class called Orange Theory. Culpo has said that exercising makes her feel good.

17. She Has Modeled for L’Oreal

Winning the Miss Universe title helped Olivia Culpo to launch her modeling career. She signed with Trump Management and began working for some big brands almost straight away. Two of the biggest brands she had modeling contracts with are L’Oreal and Kipling. Since then, she has also appeared in the Sports Illustrated Swimsuit Issue in 2018.

Olivia Culpo dated Danny Amendola from 2016 to 2018. They met in Hollywood when they bumped into each other on the corner of Hollywood and Vine. Amendola is a professional football player who plays the position of wide receiver for the Detroit Lions in the National Football League. It was rumored that the couple split after Culpo saw photos of him with another woman. Following their split, Amendola criticized Culpo on social media, describing her as having a fishbowl lifestyle. He also accused her of using the Internet to attract attention to herself and to make money. He later deleted his posts and blamed miscommunication for his actions.

19. She Has a Song Written About Her

Between 2013 and 2015, Olivia Culpo dated singer, songwriter, and actor Nick Jonas. Prior to their split in June 2015, Jonas penned a song dedicated to Culpo, says Hollywood Life. The song was called ‘Jealous’ and Culpo starred in the music video for the single alongside Nick Jonas. SHe is seen riding in his car and laughing.

20. She Always Carries Lip Liner in Her Clutch Bag

In an interview Olivia Culpo revealed that she always carries lip liner in her clutch bag. She says that her other essential fashion items are a good pair of leather leggings and a Canada Goose jacket. Her other favorite style is dressed-up workout wear. Culpo told them that she prefers to avoid fashion roles as she doesn’t think there are any fashion ‘don’ts’.