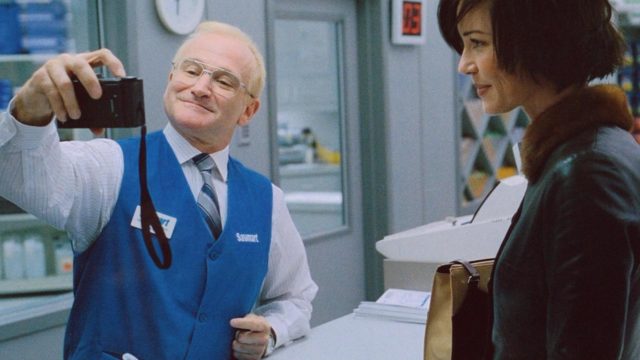 One Hour Photo is by far the most disturbing movie that Robin Williams has ever made, and after having watched him for so long and seen him bring joy to so many people in so many different ways some people actually called this a failure on his part. Thankfully those that did were few in number, because a lot of other people thought that this was something impressive as it was haunting. Seriously, to watch a man that seemed to be designed especially for comedy to take on a role such as this was kind of eye-opening. Few people, if any, expected Robin Williams to bust out his drama chops in such a way and prove that he could do something that would make you question a service that’s been around for a very long time. While many people have switched to digital film a lot of them still get their pictures developed at stores like Costco, Walgreens, and many other places. Just think of a guy like Sy Parrish looking at those photos of your family and friends and wondering just why it can’t be him all cozied up to the people in the images. That sends a shiver down the spine just thinking of it since those are usually personal and very private memories that people have access to.

Plus, think of it this way, someone like Sy that takes things way too far in the pursuit of his own obsessive happiness could easily barge into your life and do whatever he pleases. That’s simply terrifying when you really look at it. Those that we rely on have a lot of power over us and we rarely ever see it that way since we’re paying for a service and expect it to be there and ready when it’s all done.

Films like this make you realize that it’s important that you trust the people taking care of you and your private moments.

10. Some people actually forgot it was Robin Williams they were watching.

Robin Williams was actually glad to hear this. It makes sense considering that he was going for something that was beyond the norm for his skill set and wanted people to think they were seeing something unique and not at all like something he would do. This proved that he could do something besides drama and comedy and it managed to wake people up to the fact that he was extremely talented in more ways than many folks realized.

9. Robin Williams would play practical jokes on the set.

This isn’t much of an unknown for Williams as almost every movie he was one he would play practical jokes. It was his nature for the most part and just something he would do with fellow cast members. His level of energy just couldn’t be contained at all times and he had to let it out occasionally. To this date some of the things he did might be construed as harassment, but those that worked with him rarely if ever saw it that way.

8. The director had to pore through over 300 fortune cookies to find one that would fit the scene he wanted.

The Yorkin family were having Japanese food during the scene and the director wanted a specific fortune that said “Someone wants you to be happy.”. It seems like someone could have typed that out on a slip and put it in a cookie with less fuss.

7. To prepare for the role Robin Williams worked at a photo developing training facility.

He wasn’t the type to just walk into a role without knowing what he was doing, and for this movie he was entirely serious about as he spent a good amount of time learning how to work the photo machine.

6. Robin Williams had to shave a good amount of his body for this role.

If you’ll recall Williams was kind of a hairy man. He had to shave a good deal of his arms, his upper chest to make sure that he could play the role of Sy.

5. Jack Nicholson was offered the role of Sy.

Nicholson turned it down obviously, so it went to Williams. But initially Robin was given the part of Bill. After reading through the script again though he decided to ask for the part of Sy.

4. This is the second film where Williams had the last name Parrish.

Think back, it shouldn’t take too long. He had the name Alan Parrish in the film Jumanji.

At least in this movie he’s a little more animated though. In Office Space he had to play a guy that was an absolute jerk and didn’t do a whole lot but gripe about TPS reports.

2. Robin Williams was featured on Whose Line Is It Anyway while he was working on this film.

If you can find the episode you’ll see that he’s still sporting the blonde hair and is bereft of his usual body hair.

1. Sy’s backstory involves a great deal of abuse by his father.

He kind of flipped out when Will was discovered having an affair as it brought back painful memories of how his own father exploited him when he was younger.

Out of all the movies he did, this was the creepiest one that Robin Williams was in.