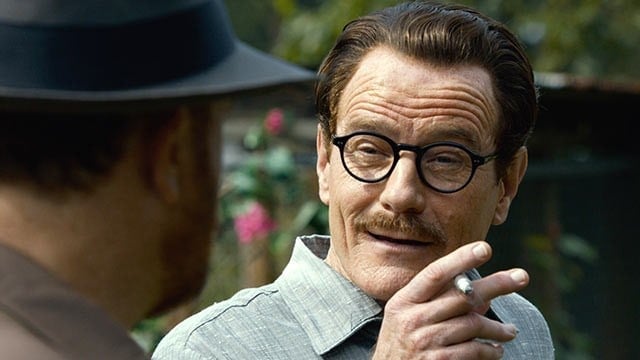 Hollywood has had its fair share of ups and downs throughout its history, but it’s hard to argue that the darkest time in the history of American entertainment was quite possibly the era of the Hollywood Blacklist. Because of the Cold War and rampant hysteria by the American people, communism and otherwise socialistic talk had no place in the American population, and the House Un-American Activities Committee was determined to see to that, subpoenaing numerous individuals in the creative committee to testify about their alleged involvement in the Communist Party of the United States.

Enter Dalton Trumbo (played by Academy Award for Best Actor nominee Bryan Cranston), the blacklisted screenwriter on whom the film Trumbo is based. After Trumbo’s support of unionized labor and his membership in the Communist Party garners the attention of gossip columnist Hedda Hopper (played by Helen Mirren) and John Wayne (played by David James Elliot), the actor that is also the president of the Motion Picture Alliance for the Preservation of American Ideals, he is forced to testify, along with nine other screenwriters who would all become known as the “Hollywood Ten,” before the committee. The belief that a liberal Supreme Court would overturn any contempt convictions drives the screenwriters, and they are all held in contempt of Congress after refusing to answer any of the committee’s questions. Things don’t go as planned, however, and the ten writers are sent to prison to serve out their convictions. During this time, the Hollywood Blacklist is greatly expanded, and the Hollywood Ten are shunned by their former friends, all attempting to keep their positions in the industry. The remainder of the film deals with Dalton Trumbo’s post-incarceration life as he tries to end the Hollywood Blacklist, eventually telling the story of Trumbo’s writing of the script for the Kirk Douglas (played here to perfection by Dean O’Gorman) film Spartacus.

The writing for Trumbo by John McNamara (based on the novel by Bruce Cook) is absolutely astounding, and he manages to capture the biting wit the titular character perfectly. This writing is aided by the phenomenal cast of the film, led by Bryan Cranston as Dalton Trumbo. Cranston gives the performance his all, and it’s clear that he left nothing on the table with this one. It’s not that often that you see a biographical performance in which it’s impossible to distinguish the separation between actor and subject, but Cranston’s effort is as admirable as one would expect. Even Cranston’s skill, though, wouldn’t have made Trumbo such a success if not for the rest of the cast, and any singular performance in Trumbo is deserving of accolade. Director Jay Roach guides the film with a skilled hand, and directorial elements of Game Change, Roach’s 2012 HBO television movie based on the 2008 presidential election, can be seen at every turn. The editing for the film is just as biting as the lead character’s dialogue, perfectly keeping spirits high throughout.

The biggest fault with Trumbo, though, is its pacing. While the story is strong, the film is longer than necessary, and you have to wonder if there weren’t some way of tightening up the story a tad without devolving into inaccuracy. Speaking of inaccuracy, I feel obligated to point out that Trumbo doesn’t have much interest in showing any guilt with any of its characters. You can’t really fault the production for that, though, as the film, while a true story, isn’t presented as a documentary. Bias will always be given for a titular character of a dramatization of reality, and that’s to be expected going in.

All-in-all, Trumbo succeeds in showing the story of one of the Hollywood Blacklist’s most notable figures, and the performances by the entire cast should be enough to convince anyone to stick with the film’s sometimes sluggish pacing. It’s clear that Bryan Cranston more than deserves his Academy Award nomination for Best Actor with this performance, and it will be very interesting to see if the Academy feels the same way come ceremony time.

While sometimes sluggishly paced, Trumbo, led by the great Bryan Cranston, tells a solid story of one of the darkest times in Hollywood’s history.