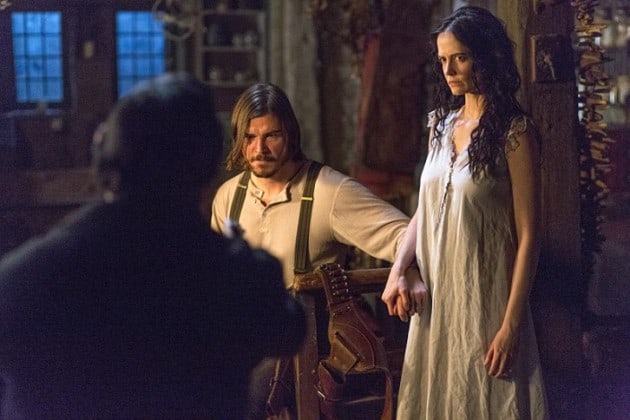 With all its players scattered across Victorian England,Â Penny DreadfulÂ has to get all of its pieces in order quickly for next week’s season finale. And a blazing trip by Viktor to the country side is only the first step; by the time “And Hell Itself” has concluded, every one of its ‘beautiful monsters’ has descended into Madame Poole’s satanist castle (save for a few, who have their own stories to tell), no easy task for a 53-minute episode to tackle. Surprisingly, “And Hell Itself” doesn’t have to cut many corners to get there, giving each character their moment in the light (or darkness) before pushing all in for what looks to be a bloody, world shifting finale.

The expedient nature with which everyone arranges themselves in various parts of Poole’s castle is impressive; and it begins nowhere near London, with Ethan Chandler (excuse me, TALBOT) and Vanessa teaming up for a little stab and kick action when Ethan’s one living victim from the hotel shows up at the Cutwife’s cottage. Fortunately, this is the low point of a very good episode; while PennyÂ was clearly going to have Vanessa take her first life at some point this season, it felt a little convenient this one-eyed man was able to follow them to the small coastal village sheÂ and The Hound of God (can we just call him that name all the time now?) were stayin in and subsequently be dispatched without too much of a struggle. Ethan’s connections to the Pinkerton family have always been his most obfuscated (and thus, least interesting) trait, a fact that again becomes obviousÂ when the curious Inspector arrives in Westminster for another smirking, ominous conversation with Ethan. Does anybody care what the man has to say about the “phantom limb,” as literary as it may be?

Thankfully, these aren’t moments “And Hell Itself” lingers on for too long; there’s many other things to take care of, like putting the Dorian/Brona/Caliban stories in neat alignment, as Brona-Lily begins to organize her legion of doom to terrorize London with (or so we can only presume). This story can exist on intrigue alone at this point; I’m just happy to see Dorian brought into the fold in a meaningful way, even though his romance with Angelique came to such an unsatisfying conclusion. For the first time since him and Vanessa got naked and bloody together, Dorian is orbiting the main characters, which brings new intrigue to the recently greenlit third season; will this pit Viktor and company against Brona and her Monster Suitors in 2016?Â I don’t want to jump ahead of myself of course, but these developments – including Caliban’s recent imprisonment, at the hands of his disturbed, mustachioed employer – give some much-needed focus to characters floating in a wind of poetic monologues and seemingly empty-headed dramatics; whatever may have transpired in past episodes, “And Hell Itself” takes some necessary steps to ensure these characters will be a much larger part of the picture in Season 3.

Enough pontificating, though: “And Hell Itself” is strongest when its working its way from Malcolm’s home to Poole’s, bouncing back and forth between a house united and one beginning to divide, with Hectate enacting some kind of power play against her mother. Malcolm’s gone mad at the visions of his dead children (Viktor quickly joins him when he arrives at the castle, locked in with visions of Proteus, Lily, and Caliban haunting him), and Vanessa has purgedÂ into the depths of Poole’s castle after a fun scene in the doll room (“Murderer!!!”), which means “All Hell Itself” can spend time with this season’s best pairing, the budding bromance of Ethan and Sembene.

All season,Â Penny DreadfulÂ has drawn parallels between Ethan and Sembene; this episode, they kick that up to 11, ending with Sembene’s ultimate sacrifice to save Vanessa. The honesty those two share before heading out to the castle isÂ Will Graham/Hannibal Lecter worthy; except Ethan and Sembene do not only understand the monsters inside themselves, butÂ acceptÂ them in each other (unlikeÂ Hannibal). Which makes the ending of the episode that much more heartbreaking; Sembene accepts Ethan’s ‘gift’ in the darkest way possible, sacrificing his life to the blood lust of the Wolf Man, hoping that he’ll be able to break through the trap door closed on them in the spiraling hallway, and fulfill his destiny as the Hound who saves (or ultimately dooms) Vanessa as she enters the Master’s world. It may not be the best way for Sembene to reconcile with his past as a slave trader, but like every other character at this point, they are acting on faith and faith alone, hoping to be spiritually rewarded (or at least alleviated) in their quest to save Vanessa’s soul.

It all makes for an hour that refuses to stop pushing its character into shadowy corners, and that’s when Penny DreadfulÂ is at its best, rather than pontificating with a drugged up Viktor on the couch (as entertaining as those moments may be;Â Penny‘s allegiance to beautiful language seeps through the pores of any scene). And while itÂ all feels quite familiar to theÂ construction prefacing last season’s finale, there’s plenty of signs thatÂ Penny DreadfulÂ will be able to deliver a much more entertaining, poignant final hour than last season’s messy climax with next week’s “And They Were Enemies.”