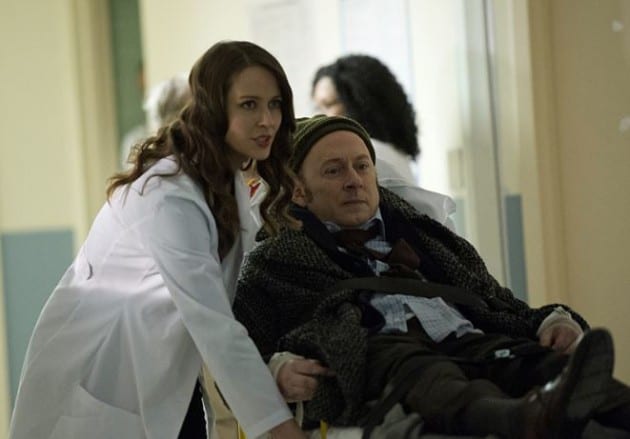 The big parallel this season ofÂ Person Of InterestÂ is the battle of Elias v. Dominic and the battle of The Machine v. Samaritan. They mirror each other in many ways: Elias is the old school, wise, learned leader against the brash and power-upstart that is Dominic. But the most important thing to take from this is that Elias and The Machine are as much a part of the problem as a solution. Their existence puts the people they care about in clear and present danger, and the only way they can protect the ones they love is by giving up the power they’ve attained.

Along with the Elias/Dominic and The Machine/Samaritan stuff, we also checked in with our good friend Control, whose been out of the picture since she was kidnapped and informed by Team Machine. One of the major themes of tonight’s episode was value of information; the whole episode was predicated upon knowing exactly what was going on in order to achieve the end goal. The biggest problem with Dominic and Samaritan is that they hold a lot of cards but believe that they have the full picture; the variables they don’t account for are things that are not quantifiable. Sameen Shaw, for example, caring about her friends enough to crawl through the ducts and nearly die. To put it more clearly: Samaritan and Dominic believe what they wanted to believe.

But the fact of the matter is that Dominic and Samaritan might have won; Elias, Reese, and Fusco are in the clutches of their enemy, and Samaritan is racing to end The Machine. The flow of information that the two had was false, yes, but their enemies have no real way to defeat them. Yeah, sure, Dominic killed his right hand man, and Root killed Martine. Cool. But they are still facing down the barrel of a gun, and the moment that The Machine is gone, Root, Reese, Harold, and Fusco are all dead. They’ll never be found again. The information that Dominic and Samaritan had was damaging, but not fatal; that’s why they keep winning. Every mistake Dominic makes he can shrug off; every mistake Samaritan makes is simply a part of the growing process. The best laid plans of Team Machine and Elias were easily undone, because they were fighting a guerrilla war with no men, money, or resources. There’s a reason the story of David and Goliath resonates with us; little man beats big. But this time Goliath is a god, too.

Control fits nicely into this discussion as well, because she was in the dark almost as much as Team Machine was. It’s been kind of strange to see how clueless both Team Machine and the government have been during this conflict with Samaritan, because you would think that with their resources, they would at least find something. But it’s not that surprising when you realize that Samaritan is not an organization, but a cult. She comes face to face with Samaritan and realizes that she truly is facing something outside of her control. You can fight people who want power and control; you just give them enough rope to hang themselves. But for people who really believe in the moral righteousness of their cause, you have two options: scorch the earth, or take them down with you. That’s the main drawback of solving a lot of the world’s problems: if you want that evil to cross the River Styx, you have to be the one that pays the ferryman.

It’s even worse, now. Shaw is on their side, mentally broken enough to turn on her friends, or at least it seems that way. To have to fight a friend is one of the worst things you can do, especially one like Shaw. Nobody is going to come out of this unscathed, and probably a few will end up dead. Team Machine just has to hope that there is more of them when the smoke settles.

– She wrote down “The Correction” in her day planner? Okay.

– Amy Acker is the best.