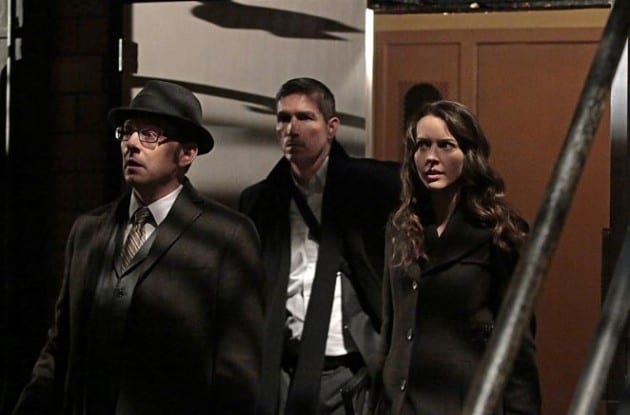 This season ofÂ Person Of InterestÂ has had many themes. We’ve dealt the idea of security versus freedom; violence versus non-violence; greater good versus principled action. But the one that has always been present, since the moment the show aired, was the idea of parent and child. Finch could be described as a den mother, in a lot of ways; he takes in these broken, angry human beings and shapes them into forces of good for society.

But I think we sometimes forget that The Machine is Finch’s literal child, his creation, brought to life and raised to intelligence by his careful hands. Finch has never wanted to take responsibility for her in that way; he’s always tried to push that off, to ready himself for the inevitable moment when the plug must be pulled. He got that chance tonight.

The last thing The Machine might’ve ever done was communicate with her dad. “Father,” she says, in shaky, flickering text, “I’m sorry.” She broke his rules; she got involved. She wanted to live, and she broke the rules. She hoped that he would understand, but also understood what she had done. She is willing to die if that’s what Finch wants. She’ll be gone, if that’s what needs to be done.

Another one of the most important themes of this season, reiterated this episode, was whether Samaritan was actually a bad guy. He seems like an out of control teenager, with that cold certainty of vision that comes from being at the top of your very young hill. We’ve all been assuming that he wants more control, more power, more of himself riding through the airwaves, and that is still true; but his methods are not blanket violence. He is closer to The Machine’s methodology than anyone would’ve ever dreamed of. He wants to stop crimes before they happen, and so he kills the troublemakers. He kills Elias and Dominic. He snatches up Control. The world is, as Greer said, an undeniably better place.

The Machine felt that way once. She wanted that US Senator put in the ground for his stupidity and arrogance. Had he been killed, Samaritan is stopped, and many less people are dead. But she left that decision in the hands of the humans, and they didn’t do it. That’s the problem with Samaritan; he has all this power and nobody to tell him no, and so when it comes down to it, he gets to send out orders to murder dozens and dozens of people. Samaritan can’t, or won’t, understand. He sees peace and war as binaries; either you are at peace, or you are at war. But anyone who has read history books or looked outside of their window knows that peace is full of fear, and war is full of courage. The United States spent forty years under the knee-buckling terror of nuclear annihilation, and twelve years later was plunged back into war. Dictators can never last, because to have that much power and that much control has a cost of perspective. Sounds laughable, a sentient AI with the ability to see all things lacking perspective. But he is. He’ll never get that force isn’t always the best option. He’ll never understand the fear that people feel.

He won’t get it, because nobody told him. He was born into this world and Greer gave him the keys. Greer was a bad parent; he expected this young intelligence, this child, to figure things out on its own. It did, of course, but the blood it spilled, and the blood it will spill, is a failure.

The Machine was raised by Finch. She had a parent who recognized her incredible potential and made sure to teach her the value of being alive. How often do real people forget this? How often do we shrug off tragedy and bloodshed as inevitable facts of life? Finch did, once; he was so frustrated and broken. He almost killed Alicia Corwin. He knew the extreme depths that fear could drag you to. He shared that wisdom as he raised her.

So this last conversation was her thank you, a way of reaching out and touching him. Finch has and will continue to be willing to do anything to protect people. He believed that The Machine was incapable of feelings those things. He believed she was just a computer program with a brain, unable to comprehend simple human behavior. But she does. God, she does.

The Machine is not a human, and she is not an animal, but she is not bolts and wires. She is literally all around us, watching us, experiencing us. You can frame her as running programs to determine future behavior, and you’d be right. But that data doesn’t get shuffled off to a different program; she is aware. How many times did she see grieving parents, curled up on the couch, watching their child’s favorite movie? How many times did she see a man get down on one knee, kneeling as one half and coming up as a whole?

Harold sees this. He gets it, finally. The Machine is not a machine; she is a human, and she is all around us, and she has experienced the ups and downs and highs and lows that make us who we are. She is this great power, and it’sÂ becauseÂ she has perspective. She really is human.

He carries The MachineÂ out himself, all of her is in this small briefcase. She became as vulnerable as the day she was born, as the days he raised her from a hard drive to a server room. Harold saves her because she is human.

Who would’ve guessed, all of those years ago, that a collection of electrical signals would be the most human of them all?

– It’s been a privilege reviewingÂ Person Of Interest. I hope you’ve enjoyed reading these reviews as much as I have writing them.

– Amy Acker is the best, one last time.