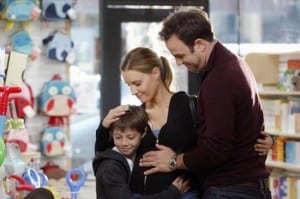 As we’ve seen throughout Private Practice‘s final season so far, each episode is taking a focus on a different character, and this week, we saw the world as Cooper sees it.Â  “Life Support” took a completely new creative direction from the episodes thus far, even broke the fourth wall consistently as Cooper relayed his thoughts on a scene directly to the audience.

Aside from this particular aspect, the episode also recapped moments throughout Charlotte’s pregnancy, beginning at the 26-week mark, then flashing back to the eighth.Â  The very first thing we see when the episode begins is Cooper lying in bed with Charlotte, speaking upwards towards the camera on how thankful he is for his life.Â  As the day begins, Cooper walks us through important facts about the triplets and Charlotte’s nutrition, and just his general excitement for everything.Â  We follow as the pediatrician brings Charlotte breakfast in bed, and are just as stunned when, six weeks early, Charlotte’s water breaks.

Fade back to 8 weeks

This particularly flashback brings us back to the premiere and the moment in which Charlotte breaks the news to Cooper that she has three babies on board.Â  As Charlotte panics, paces the room, Cooper speaks directly to the camera, excited and looking forward to their future, and almost proud of himself for their blessing of triplets.

At the 12-week point we follow Cooper and Charlotte into what could presumably be the couple’s first ultrasound together.Â  It’s here that we get the first indication that Addison is concerned about Charlotte’s attitude, and yet further proof that Charlotte is not yet attached to her pregnancy.Â  Despite Cooper’s excitement over the triplets and Addison’s pursuance to give her more information about the risks involved with a multiple pregnancy, Charlotte only seems concerned with getting back to the hospital.Â  This determination of hers brings us back to “Good Grief,” and the fact that Charlotte was and is very hesitant to replace Pete at St. Ambrose.

Finally, it’s time to tell everyone at Seaside Health & Wellness!Â  But, as will everything in this practice, nothing is truly a secret, and when Charlotte announces their news, everyone already knows.Â  The bunch questions the couple if they want to find out the sex of the babies, and Cooper dives into explaining that he wants the surprise, the mystery!Â  Because, that’s exactly who Cooper is — fun and somewhat spontaneous.Â  Charlotte, of course wants to know.

Violet, still torn over Pete’s death, goes to Cooper to vent about what she’s going through, however, Cooper can only think about life, and goes on to the camera about how awful the situation is.Â  Violet thanks him for listening, though…Cooper really wasn’t, and upset with himself, tells the camera to go be with Violet.Â  She’s at the hospital, checking on a patient of hers when Gabi, a member of her mourning support group comes up to her, asking why she’s not in group.Â  As it turns out, Gabi was at the hospital, checking up on her girlfriend who is still on life support.

Yet again, Addison tries to get Charlotte to understand the risks of her pregnancy, even urging Cooper to talk to her…which he does.Â  Later that night, he expresses his worries to the camera — he doesn’t know what the right decision is, regarding selective reduction from triplets to twins.Â  Save his babies and risk losing Charlotte?Â  What does he do?Â  Charlotte is completely set against the selective reduction, and as she says, they told Mason he was having three siblings, so he’s having three siblings.

The King-Freedman family begins the hunt for baby supplies, starting with a stroller!Â  One of the most entertaining moments in the episode, a sales clerk suggests to Charlotte and Cooper that the best thing to do is carry the baby, an insinuation that sends Charlotte into a rant about triplets.Â  Thankfully, Cooper knows his wife and sends the clerk away with a “bet she wished she called in sick today,” crack, and he and Mason wrap Charlotte up in a hug.

Cooper continues to explain his wife’s inhibitions during Charlotte’s complaints to Amelia.Â  Amelia wants to throw a baby shower, but as Cooper explains to us, Charlotte hates them and the sort of woman who want them.Â  It’s only when the shower is posed as a way for people to just buy things for her that Charlotte gives in.Â  The highlight of the 16 week block, however, is yet another ultrasound.Â  This time, the couple learn the sex of their babies — three girls.Â  Cooper, thrilled, proclaiming to the camera that girls are “awesome,” talks to the screen, jumps up and down, while Charlotte sulks, wondering what the hell she’s going to do with three girls.

It isn’t until this point that Cooper learns about Charlotte’s concern with girls — girls are silly and stupid, and hate their mothers, according to her.Â  Coop sidelines to the camera, sweetly musing about having girls of his own, not letting them date until they are thirty, and hoping that they’ll find men like him…however, he does acknowledge the fact that he was a man-whore before he met Charlotte.

But what about Mason?Â  How does he feel about the babies?Â  Though Mason’s house-hunt with Cooper reveals Cooper’s fear of not having space for his family, it more importantly brings up Mason’s concern that Cooper will like the babies more than he likes him.Â  It’s a sweet moment, with the typical fatherly reassurances to Mason, and as Cooper says…they’ve got to stick together as the only men in the house.

Twenty weeks also sees Cooper and Charlotte get kicked out of their natural childbirth class for not taking breathing seriously and making fun of the other couples.

Finally we see Cooper as a true nervous father.Â  During a game of basketball with Jake and Sam he poses numerous questions, under the cover of asking for a patient of his…but the guys call him out, even letting him know that no matter how prepared for fatherhood he thinks he is — he isn’t.

This time also forces Violet to apologize to Gabi for overstepping and asking Amelia to examine her girlfriend’s condition.Â  Gabi knows her love won’t wake up, other doctors have told her so, but she cannot just pull the plug on the best thing to ever happen to her.Â  When the question is brought to Violet — was Pete the love of her life, and how does his death make her feel? — it first comes clear for Violet that she’s relieved.Â  Even though she loved Pete, is even surprised to believe that he was the love of her life, by not fighting with him anymore she is relieved.

But in Mason’s opinion — two religions equals double the presents.

When we arrive back at twenty-six weeks it is right in the middle of the chaos of Charlotte’s early labor.Â  Cooper is in a full-blown panic, rightfully so, and voices it to the camera — “It wasn’t supposed to be like this.”

Addison arrives to find out that one of the girls is breech, forcing Charlotte to deliver her early — too early.Â  It’s the first time we see Charlotte’s strong front crack, afraid that the baby will die, and the she will die, but Cooper comes in like a knight in shining armor and makes his wife promise that she won’t leave him when he goes to be with their daughter.

Cooper follows as his nameless daughter is taken into surgery with Sam to protect her heart, and sits beside her incubator while she silently fights for her life.Â  Of course, Cooper’s final soliloquy is one of immense fear for his daughter.Â  He doesn’t know what he should do — she may not survive and he is not ready for what is to come for his family.Â  But, he reminds us, who really gets enough time?Â  Cooper asks her to fight to stay in their family, voicing that they don’t even know who she is yet, but he loves her.Â  In a moment of fear and faith, Cooper takes a bottle of holy water, stolen from the hospital chapel, and baptizes his daughter’s incubator.

Big brother Mason moves the emotions in the scene further when he comes in, asks if he can touch his sister, and is the first to wish her a happy birthday.

Obviously, this episode was a huge break in convention for a serial drama — let alone a medical drama.Â  The constant asides from Cooper pulled the audience in further, making the character’s feelings more tangible, rather than assumed as audiences usually do.Â  Of course the episode was, at its core, a statement on life support – hence the title.Â  Not only did we see how baby King-Freedman clung to life, but we also saw how Cooper attaches himself to those around him, always hopeful, and how the loss of life effects Violet.

Overall, I really enjoyed this episode.Â  I thought it was adorable how each ‘week’ had a title card before it indicating the week number with three pieces of fruit representing the size of the triplets — plums, lemons, lettuce, etc — and I’m particularly fond of how the episode tried to bring Cooper and Violet’s friendship back together, though it was challenging.Â  The episode helped to show how much these characters have grown over the series, and while I can understand how the formatting may have made some viewers uncomfortable, why not try something completely different for one of Private Practice‘s final episodes?

What did you think of “Life Support”?