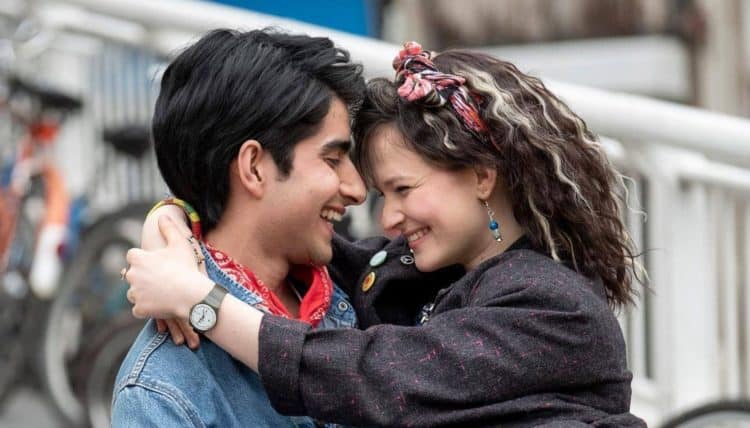 Cultural icons have a way of inspiring people to make a big statement when it comes to popular culture and Blinded by the Light is one of those that seems ready to speak to a lot of different people since The Boss, Bruce Springsteen, was and still is a huge icon that many people either follow with a passion or can at least claim is one of the greatest of all time. In this movie his music inspires a young Pakistani man to follow his dreams despite everything that his family tells him to do. This kind of approach is something that a lot of people can recognize since family quite often will show they care by either telling someone to go for it or telling them to play it safe, as is done in this film. The former is highly supportive while the latter is, well, more traditional in some ways but definitely not quite as daring or as able to succeed at all times simply because playing life safe doesn’t allow for a lot of opportunities that might lie outside the boundaries that such a mindset allow for. That’s why this movie might be worth seeing since it reminds us that no matter who tells us what in this life the best chances are the ones you take because you feel the need to do so.

After all, that’s what living is all about. Here are a few reasons we’re excited to see this movie.

10. It’s based around the songs of Bruce Springsteen.

According to Amy Kuperinsky from NJ.com the bidding war for this movie when it was first shown at the Sundance Film Festival was quite furious and it could have something to do with the fact that it prominently features Springsteen’s music and uses it as a pretty heavy plot device.

9. This is a movie that’s about breaking down barriers between people.

Just after watching the trailer it’s evident that this movie is going to be focusing a lot on bringing people together and taking down barriers between family members and friends to show the inclusive nature of music and all it can do in the lives of those that listen.

8. Writers and musicians alike should get a kick out of this.

Being that the main character is a writer and the music he’s listening to is that inspirational and so easy to follow it seems that a lot of those who write and enjoy music might get a lot of enjoyment out of this since a lot of us tend to harbor feelings that make us feel like outcasts now and again.

7. Films that are about following your dreams are highly inspirational.

A lot of folks love watching movies that are all about seeking out your dream and making good on it, even if the character doesn’t know what they want to do at first or even by the end of the movie. It’s usually the journey that entices a lot of people to watch since it’s typically quite impressive.

6. Family expectations vs. what you want to do with your life makes for good cinema.

In movies families tend to be very complicated and in some cases want the best for their kids but aren’t willing to accept the lives their kids choose since they often run contrary to what the parents and family expects them to do. This typically creates a power struggle within the family dynamic where someone has to finally break down and give in before the family is torn apart. In terms of drama this is usually a good draw.

5. It offers a lot of insight when it comes to dealing with your kids and tradition.

Tradition is all well and good and it’s important to keep it alive so as to preserve a culture. But these days tradition is not always the way to grow and to expand as people continue to evolve and adapt to the modern era.

4. This movie reminds us why it’s necessary to recognize tradition but still break with it.

There’s nothing wrong with traditions, but in this day and age it’s usually necessary to pull away from them in order to go out and recognize that the world around us is constantly changing and needs to be adapted to in order to survive into the new era.

3. Bruce’s lyrics are epic as many would claim.

There’s something magical in Bruce’s words no matter if people see it or not. He’s called The Boss for a reason, and it’s different to every person, but the fact is that his music is nothing short of amazing.

2. The story is based on true events.

It’s obviously not an entirely true to the letter story, but it was based around true events by the person that wrote it and helped to write the script. In that manner it gives at least some authenticity that people should appreciate.

It definitely comes off looking like one of the feel-good movies of the year and should be pretty impressive.

Go on and take a look at the trailer and you might find that you want to take a look too.