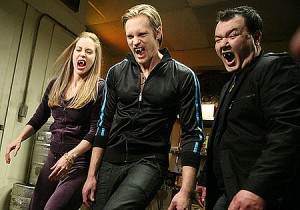 Cut to Bill’s house after the credits, where he and Sookie are lounging in bed. I just read a quote from Catherine Zeta Jones who said she’d love to do a movie with her husband, Michael Douglas, but wouldn’t want them to play a couple in it, as that seems a little voyueristic. I was just thinking the same thing about Anna Paquin and Stephen Moyer. I mean, they’re a couple in real life. This is kind of creepy, isn’t it? In case you didn’t know that, I’m telling you now, so you can be as slightly disturbed as I.

ANYWAYS, the point is that Sookie and Bill are taking about the awesome make-up sex they just had. Sookie’s embarrassed that she was sleeping with her boyfriend while Jessica was in the same house and suggests that Bill go a little easy on her. But Bill just sees Jessica as an evil, blood-sucking vampire. Sookie suggests he try a different tactic, since his current plan with Jessica isn’t working out so well.

Back at Fangtasia, Pam is trying to fix the mess that is Eric’s hair. We learn that Eric took Lafayette to discover his supplier of V (Eddie Fournier). Lafayette is only too happy to spill the beans in order to protect his own ass, but he admits he isn’t sure what happened to Eddie. Eric threatens him a bit more and Lafayette says he thinks Jason Stackhouse might have something to do with Eddie’s disappearance. Pam and Eric converse in a foreign language and quickly conclude they won’t make a move against Jason, since he’s Sookie’s brother and Sookie is too important to them.

Eric asks whether Lafayette may have known a V dealer in Dallas and he admits he did, though he only has an email address, not a name. Eric reveals that an old friend, Goderic, has gone missing and that he’s a very old and powerful vampire. Eric wonders whether this Dallas dealer knows about Goderic. Eric orders one of his minions to take Lafayette back down to the basement, something Lafayette doesn’t take well to. 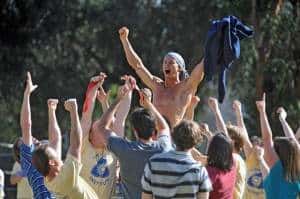 Jason’s riding a bus to the church leadership camp and the kiddies are singing camp songs. It’s all very cheesy, but Jason, brain trust that he is, seems pretty into it. Another camper, Luke McDonald, introduces himself to Jason. The boys bond over their love of football. Luke asks Jason to bunk with him at the camp and the singing starts again.

Tara greets Eggs, and Egg’s ridiculously sculpted chest, that morning at Maryann’s house. Eggs admits that he was homeless before Maryanna found him and used to be in prison for drug possession and dealing. Oh, and armed robbery and assault. Tara’s a little freaked out by the fact that Eggs may not be the catch that his sculpted chest suggests he is and he walks away and….oh, I’m sorry, I just got distracted by a photo of a wet Sam Worthington that’s featured in this week’s issue of EW magazine. What show am I recapping again? Oh, right, True Blood. Sam Worthington should star in True Blood. That would be HOT.

Sookie’s back at her house now, watching a couple on television making a plea for a kidnapper to bring their daughter home. Turns out they’re crazy Jessica’s parents and Sookie seems startled. She goes upstairs to her grandmother’s bedroom and looks at an old photo of herself, Gran and Tara.

At the leadership camp, Steve and Sarah welcome the campers. A girl named Amanda hands out “rings of honesty”.

Tara arrives for work at Merlotte’s, with Maryann in tow. Sam isn’t happy to see her, but she sits herself down to check out a menu. Sam wants Maryann to stop playing games and asks her to leave. She isn’t eager to go and he relents.

The campers are playing Capture the Flag and Jason’s doing a great job, while Steve and Sarah look on proudly. Jason takes off his shirt (of course) and manages to win the game and the praise of his team members. 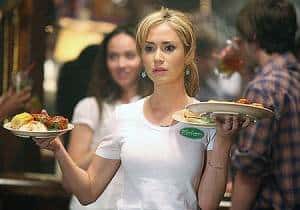 Sookie arrives at Merlotte’s to chat with Tara.

Down in the basement, Lafayette spots something silver in AIDS guy’s corpse. Ew. There’s entrails. I’m going to look at the Sam Worthington photo again until this scene is over. Turns out the silver was actually a metal rod in the guy’s leg, which Lafayette uses to free himself from his chain.

At Merlotte’s, Sookie has obviously filled Tara in on the Jessica situation. Tara tells Sookie she enjoys the luxury of living at Maryann’s house, but she’s suspicious of the situation. Sookie asks Tara to move in with her. Before Tara can respond, the girls are distracted by the new waitress, Daphne, making a mess again. Sookie meets Maryann on the way out. Sookie reads her mind, but all she hears is chanting in a foreign language. Sookie asks where Maryann is from and she replies “Cape Cod”. Sookie asks Tara to let her know about moving in. Maryann jumps on that right away and Tara tries to play it off.

Back at Fangtasia, Lafayette tries to make a run for it, but encounters a locked door and a blonde woman holding a gun and guarding the bar during the day. The woman shoots him in the leg and Lafayette goes down.

Back at the leadership camp, the kids are listening to a girl putting on a little concert. She’s the Amanda girl who gave out the rings earlier and took a liking to Jason. Steve comes onstage to lead a game about avoiding and shooting down vampire sympathizers. Sarah’s going to play the sympathizer and Steve asks Jason to come onstage to join her. Jason isn’t as into this situation as the other campers. 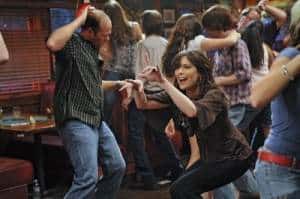 Sookie arrives at Bill’s house and is greeted by Jessica, who’s upset after seeing her parents on TV. Bill’s out running errands and Jessica is crying because she doesn’t like it there. She says she thinks she misses her family. Sookie tries to bond with Jessica by saying that she recently lost her grandmother. Jessica asks if Sookie could drive her to her parent’s house, but Sookie says she can’t. She suggests Jessica talk to Bill about it, but when Jessica keeps crying, Sookie relents and agrees to take her on a drive-by of her parent’s house. She also tells Jessica never to mention this to Bill.

Turns out Bill is shopping at a clothing store, looking for clothes for Jessica. A saleslady comes over to help and starts flirting with him. She quickly realizes he’s a vampire, which he admits, and then offers to take him into the dressing room. She’s clearly a vampire groupie. Eric greets Bill and says they need to talk.

At the camp, Sarah and Jason are acting out vampire sympathizer/non-vampire sympathizer. Jason actually breaks a flagpole when Sarah pretends to be a vampire and then flashes back to Amy killing Eddie. Sarah seems awfully turned on.

Terry Bellefleur (Andy’s brother) is acting as interim chef at Merlotte’s. Arlene offers to help him out a bit as Daphne keeps proving that it was a bad idea to hire her as the new waitress. Terry realizes that a lot of the food being prepared is being sent out to table 4: Maryann’s table.

Andy’s getting drunk at another table (and reveals that he’s a former alcoholic) and Sam comes over to him, concerned. Andy agrees to go back on the wagon tomorrow. Maryann, meanwhile, casts some spell over the people in the bar that starts up a nice big dance fest.

Back at the Gap or Forever 21 or some store, Eric tells Bill that Godric, the sheriff of Area 9 in Texas. He wants Sookie’s help in finding Godric, but Bill doesn’t want to involve Sookie. However, Eric reminds Bill that he made a deal with Sookie and has no qualms about taking her without asking for Bill’s permission. Bill doesn’t relent and Eric walks off, clearly confident that he’s going to do what he wants anyways.

Sookie drives Jessica to her parents’ house. Sookie starts crying, saying that what happened to Jessica was her fault. Jessica says she doesn’t blame Sookie and then takes off in an insane vampire run when she sees someone in the window. Her mother and sister come to the door and Jessica greets them happily. Jessica asks her mother to invite her in and, despite the fact that Sookie balks at this, the mother does. 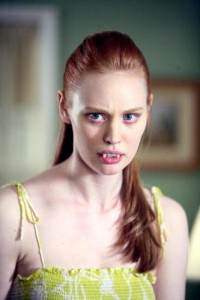 Eggs come to talk to Tara at work. He says he’s wants to be with Tara as Maryann gets Andy up for a dance.

At the camp, Luke is deriding Jason and his awesomeness. I guess Luke is just threatened by another alpha male.

Sam re-enters the bar to find everyone dancing due to Maryann’s spell. One lady’s eyes turn all black as Sam brings Maryann into his office. He wants her to knock it off and she does some sort of weird vibrating thing that freaks Sam out. Sam turns into dog and Maryann tells him to stop threatening her, otherwise she’ll let out his little secret.

Inside Jessica’s house, Sookie is pissed that Jessica has gotten her into this situation. Jessica’s father arrives him and hugs her. He then yells at her for putting them through this and starts pushing her around. But Jessica vamps out, indicating that her father used to beat her.

At Fangtasia, Pam and Chow are watching over Lafayette’s bleeding body. Eric returns and Lafayette asks him to turn him into a vampire. The three of them descend on Lafayette and drink from him.

Jessica rushes her father as her mother and Sookie beg her to stop. Jessica’s little sister looks on, horrified, as Jessica is about to kill her father. Bill bursts down the door and orders Jessica to stop. He glamours Eden (Jessica’s sister) into inviting him in. She does and then Bill basically throws Sookie out the house, telling him he needs to clean up “her” mess. He glares at Jessica and her family as the credits roll. Will he kill them to cover this up? Probably. We’ll have to wait and see.