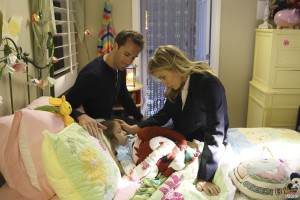 I love reading scripts. This may have something to do with the fact that I’ve never really read a script until I sat down to read the FlashForward pilot. I’m sure that people who read 50 scripts a day are all “ugh, why is this girl so excited about this stuff?”, but I just love it. I love it because I still find the process from receiving the script to seeing the final version on my television so ridiculously magical it makes me feel like a kid again. Maybe if I spent a few years actually working in the movie or TV industry I’d feel different. So if anyone wants to offer me a job and beat the joy and naivete out of me, be my guest.

Anyways, the point is, I’ve read the script for the FlashForward pilot episode and I’m going to tell you about it. I’m also going to tell you that I loved it. If you’re looking for hard-core spoilers, I’m afraid that I’m not going to provide them. I think I may have signed a gag order (someone ask my lawyer….) and, frankly, I don’t want to spoil everyone too much. I will, however, provide some more information about the characters and the plot that hasn’t been revealed in all of the generic interviews and press releases.

Mark Benford (Josesph Finnes) is a former alcoholic. The man’s got a stressful job, alright, so cut him some slack. We open with the news that his former alcoholism is still a point of contention between himself and his wife, Olivia (Sonya Walgar). While they clearly love each other, their marriage could go south very fast if he falls off the wagon.

Demetri Noh (John Cho) plays Mark’s FBI partner. In the pilot, he and Mark are surveilling some suspected terrorists for a case. They’re actually in pursuit of a van while they experience their flash forwards. Oh, and Demetri is going to get married.

The first time we see Bryce Varley (Zachary Knighton), who also happens to work as a doctor at the same hospital as Olivia, he’s seriously contemplating suicide. His flash, however, stops him. 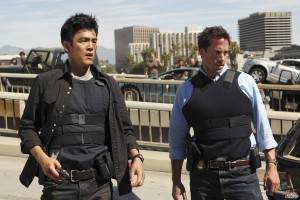 The characters experience their flashes very early in the pilot episode. I love that. No sense in providing too much unnecessary backstory. This is the Lost method of story-telling. I’ll learn what I need to know about backstory through exposition and flashbacks, although I haven’t seen any flashbacks yet in the script.

As you can see from the promo pics for the show, Mark and Demetri are in a car chase when they experience their flashes, causing them, and everyone around them, to become involved a spectacular freeway pile-up. I suspect this is the money shot for the pilot, because although the rest of the episode is very interesting, most of the action happens in the crash scenes and the aftermath.

Shortly after the flashes Mark and Demetri soon realize that the blackouts are world-wide and Mark returns to the FBI field office to try to piece together what happened with his team.

Want to know about the specific flashes for the characters? If so…..

Mark flashes to himself in his office, a whiteboard covered in papers and photographs. He soon realizes that he’s actually seeing himself trying to investigate the cause of the flashes and he’s probably not alone.

Mark: Mosaic. My investigation? All those leads I was running down [in my flash]. We should start following up on them now.

Mark: I was loading a gun. I was scared s**tless.

Demetri: You were scared while you were here [in the FBI office]?

Mark: Yeah. The office was empty. But I got the sense that someone was breaking in — or coming for me.

Olivia, on the other hand, sees something disturbing. She is living with a man who is most definitely not Mark. So….affair? No, actually. It’s much more complicated than that.

Demetri, on the other hand, sees nothing. He later concludes that he is dead. Demetri’s storyline most closely follows that of his character in the book.

Demetri: If I was sleeping during my flash-forward, shouldn’t I have been dreaming? I mean, I should’ve seen something, right? But I didn’t see anything. Anything at all.

Mark: I wouldn’t read too much into it. I never remember my dreams.

Demetri: What if I wasn’t asleep? Maybe I didn’t see anything because I’m gonna be dead.

Like the book character, Demetri is contacted by a woman in South Africa who tells him that she read a story about his murder. This prompts him to launch an investigation into how he died. 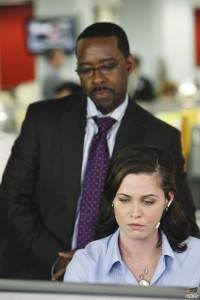 I’ve read the FlashForward novel, so when I heard that the characters would be FBI agents and doctors instead of physicists who caused the blackout through an experiment gone wrong, I wondered what would be the cause of the flashes. I also wondered whether the show would delve into the whole “free will versus determined fate” debate that raged throughout the book. Well, I can reveal this: there is no free will versus determined fate debate, because the writers throw in a crazy loop that I seriously did not see coming on page 47. And this loop throws that whole debate out of the window.

There’s another wrench thrown into the mix on page 48, when the cause of the blackouts no longer appears to be a CERN experiment. And you know how the promo says that everyone in the world blacks out? Yeah, um……

I think I may have read somewhere that this show was originally written for HBO. Does this sound accurate to anyone else? I feel like I need an intern to fact-check my statements. I bring this up just because of the tone of the script. It’s very fast-paced and f**k you, which I loved. There’s swearing and adult situations (two things I absolutely love in my TV shows). That doesn’t mean ABC can’t do this show justice, though, because I believe it can. The idea is good and if the showrunners can be smart about it, then I know I will fall in love. I love how they’re deliberately changing the storyline from the book, because reading about the circumstances of the flash and the debate of whether they will happen actually made me go “Oh…..OH!”

I haven’t hid my excitement for this show in any other article I’ve written (so much that we’ve started a separate fansite for it). In fact, I’m very much looking forward to it. The cast is unbelievably solid, the dialogue is fast-paced and smart and the entire premise is intriguing. After reading the script, I really want to see the pilot. Once I do, I’ll let you all know more.