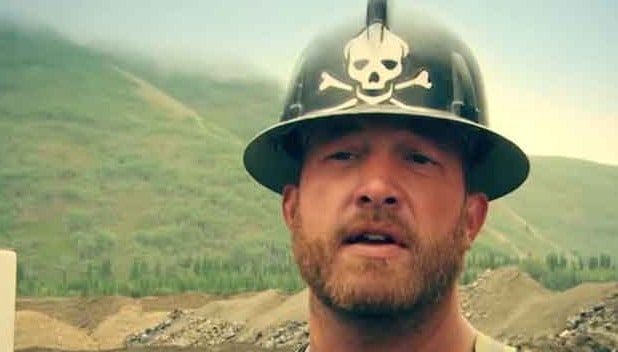 Everyone loves Rick Ness. After watching the handsome and talented musician/gold miner work for Parker Schnabel for years he broke away last year to work his own claim. The move was risky and he had little planning time with a lot on the line. If you’re a fan of the show you may want to know more about Ness so we’ve brought you ten fascinating facts about him.

Rick Ness met Parker Schnabel by chance at the Southeast Alaskan State Fair. The two men hit it off and began talking and he expressed an interest in working for Schnabel. It was 3/4 of a year later before Parker called him up. He joined Gold Rush in its third season and started as an operator for the rock truck and excavator. He advanced to prove himself operating a dozer, loader and a grader as the show went on and made himself a vital part of the crew. Between his skills and his motivation, Parker eventually promoted the ambitious Rick to foreman. He showed a talent for handling tense situations and people. Not one to stop there, he did break off to work his own claim in the sixth season, but he is still featured on the show, not least because he’s a fan favorite. Fortunately, the risk paid off and he showed once again last season why he deserves his spot on Gold Rush. It’s hard not to like someone who is so much fun to watch.

This, believe it or not is my twin brother. It's his birthday today which makes it mine to. Celebrating in Escanaba pic.twitter.com/hszq97xEG5

Rick is a twin. His brother Randy works for the family construction company as a mechanic. You can see a pic of the two in a recent tweet which shows the brothers together for Randy’s birthday. It’s obvious just looking at them that they are probably fraternal (not identical) twins.

When Rick first joined the crew and started on Gold Rush he technically had zero gold mining experience. That doesn’t mean that he had nothing to bring to the table however. Because Rick’s family owns a commercial construction company he was familiar with some of the same equipment used in gold mining. Fortunately, the ability to work heavy machinery can be translated into different areas, so Parker and Gold Rush found a spot for him. It was a good call and he certainly earned his stripes.

4. Football Didn’t Work Out As Planned

It may not come as a surprise to fans who know a little about Rick, but he didn’t start out as a musician (let alone a gold miner). When he was a teen Rick dreamed of playing professional football. He was fond of sports in general and it turned out he was pretty good at the game. He joined his college football team when given the opportunity. Sadly football was just not what he was meant to do with his life. Early in his college career, he sustained a traumatic head injury that immediately ended his football playing dreams. It seems like everything turned out OK, after all, he still gets to be a star and now he runs his own gold business. Not to shabby as a second choice career.

Very few TV personalities manage to keep their private life quite as private as Rick Ness. He’s not married as far as we can tell and there’s no record of previous relationships at all. He’s never been caught off the show in the company of anyone who looked like a date. Naturally, this just makes his fans and audience more curious about him, but he’s not talking so you’ll have to respect his privacy.

If being a gold miner doesn’t work out Rick has an unusual fallback. He’s in a band named the .357 Stringband. They’ve released three albums so far. The story of how he joined the band is as interesting as how he ended up digging for gold. He tells it simply. “I must have been 22 or 23 years old. I went to a concert to see a different band. But this other band was opening up. Their bass was terrible…I mean absolutely awful. So I approached them after the show. And asked them to give me a shot. And that’s how I ended up in the band. That was around 2003”

Rick is a typical guy in a lot of ways. We know he loves football, and it should not surprise anyone to know her also loves hitting the gym, muscle cars, and motorcycles. He’s working on his ink and plans to continue getting tattoos.

Rick is no stranger to hard work. He started early working for the family construction business. That’s where he learned those heavy machinery skills that led him to strike gold, but his work ethic definitely started at home.

Ricks annual salary is around $150,000 a year and his estimated net worth is between $400 and $500 thousand, but likely to continue to grow with his new venture and continued success.

We’re all looking forward to the next season of Gold Rush. Parker is fun to watch, but Rick brings his own style to the show and a lot of fans tune in just for him. All around, there’s plenty to enjoy as we watch Rick continue to build on his new claim and we all hope he continues to be successful so we can enjoy watching him for years to come.