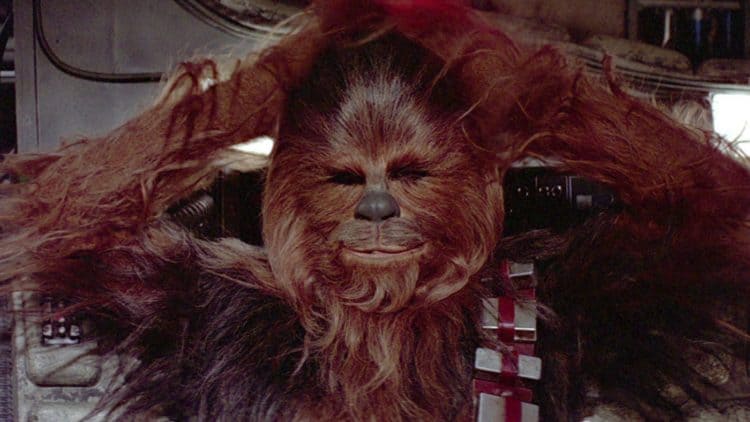 It’s a sad day when your icons pass on, and Peter Mayhew might not be known to some folks, but to those that are die hard Star Wars fans his name is bound to ring out in history as the one man that helped bring one of the biggest movie icons ever to life. Chewbacca is one of the most popular characters from the Star Wars franchise and one of the most recognized. The big, hairy Wookie has been a mainstay that even made it into the third prequel for a short time and is, in all honesty, older than many of the main characters. He’s also one of the most knowledgeable characters since he can pilot, he can fight, he can fix a starship, and he can do many other things that people don’t know about. Just because he sounds like a savage doesn’t mean he is one after all. Likely if Chewbacca shows up in any other Star Wars movies it’s going to be just as accepted, but Peter was without a doubt the man that started the character and the original Chewbacca, just as he will be in the hearts of many people as the years roll on.

Here are a few of Peter’s best moments as Chewbacca.

This seemed to be a full-time job when it came to the Falcon since Han and Chewie always seemed to be fixing something or needing to put something back together on the fly to get away or simply stay in the air. It almost makes you think that they operated solely on luck and nothing else since the Falcon was bound to shake herself apart at any moment sometimes. But with two of the best pilots in the galaxy at the helm it was obvious that things were going to turn out okay one way or another.

Wookies are known for a lot of things in Star Wars, but being patient isn’t one of them. In this friendly game between Chewie and R2-D2 it was pretty evident that Chewie didn’t want to lose, but it was just as evident that C-3PO didn’t understand why the Wookie should be allowed to win since it wasn’t logical. Han defied that logic readily by stating that Wookie’s tended to allow their tempers to dictate what they did, and Chewie wasn’t about to argue with his explanation.

A lot of people didn’t like the Ewoks since they didn’t seem to add a lot to the movie overall despite the fact that they did play a big part in it. For some reason the little balls of fur were brought in to bring on a cuteness factor that some folks thought was unnecessary. With Chewie in the same picture it was kind of funny since his irritation with the Ewoks was evident but it also seemed as though he was at least willing to tolerate them.

7. Chewie falls for a trap

It’s one thing to fall for a trap, it’s another to fall for it just because you smelled something that might have been a tasty treat. But this is one of those moments when it pays to stop and think about why something that smells so delectable would be left out in the open for anyone and everyone to steal. It doesn’t always pay to think with your stomach after all, especially when you’re on a strange planet, or moon.

A lot of people wonder as to why Yoda couldn’t find a way to avoid going into exile and at least try to undermine the Empire, but if the prequels had done anything different a lot of those same people would be chewing about continuity issues, so it’s easy enough to just let this one slide. But in this film it was fun to see Chewbacca if only for a few fleeting moments here and there since it did show him fighting for a brief moment.

5. Han is frozen in carbonite

When Chewie managed to get good and riled it was something to see since quite honestly you don’t want to be standing in front of an angry Wookie. This is the kind of creature that can literally disarm you if they feel the need since they’re raised in an environment where they have to be strong and capable. In this case however Han had to calm him down since it was a no-win situation and Leia needed someone to watch out for her no matter how tough she was.

Remember what I said about meeting up with an angry Wookie? Now think about being in front of one that saw you betray his best friend and fellow pilot. That’s enough to enrage a human, but it’s definitely enough to make a Wookie want to twist a person’s head off without pause. Thankfully Chewie and Leia decided to listen before Lando ran out of breath.

So it’s not the main story but it is still Star Wars and despite the fact that the movie didn’t go very far with fans this was still a moment that a lot of people were waiting to see. The only problem is that since the old canon is no longer being followed we got something very different than what originally happened to bring these two together. It was still an amusing fight though.

2. Chewie and the Porgs

Chewie is a meat-eater, plain and simple. The Porgs looked pretty tasty when you strip off the outer parts and cook them up, but of course Chewie has a heart too, right up until you decide to guilt him into missing a meal. The Porgs might have felt a little scared and anxious but a hungry Wookie is just about as scary as an angry one.

1. Chewie roars at a mouse droid

This has to be one of the best scenes ever since it not only shows that droids have a level of sentience that’s kind of impressive, but it’s also funny as hell since it shows that Wookie’s don’t have much of a tolerance for certain things that annoy them. Somehow, mouse droids just seem as though they’d naturally fall into such a category.

Rest in peace Mr. Mayhew, and thanks for the memories.