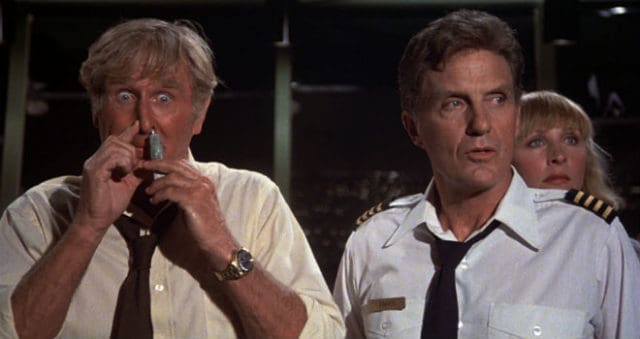 I’ll always have a soft spot in my heart for the movie Airplane!Â  I mean how could you not?Â  This is the movie that truly started all parody movies.Â Â  Everything you see today in the “Scary Movie” franchise is because of Airplane!Â  Remember Hot Shots?Â  That’s because of Airplane!.Â Â Â  If it weren’t for the Zucker brothers we never would have gotten Not Another Teen Movie which I happened to love by the way.Â Â  “Surely you can’t be serious.Â  I am serious, and don’t call me Shirley.”Â  “Yes Stewardess, I speak Jive.”Â  I mean there are countless lines in this film that I could go on with.

While it doesn’t quite hold up as much today as it used to, when Airplane! is on TV, I’ll always watch at least some of it.Â  Speaking of Airplane! did you know that the movie it parodied was a 1957 film called Zero Hour?Â  The video you are about to see is an extended look at the similarities between the original 1957 film and the more well-known comedy-remake from 1980.

It’s pretty cool to see these movies pitted side by side against one another.Â  The similarities are pretty striking.