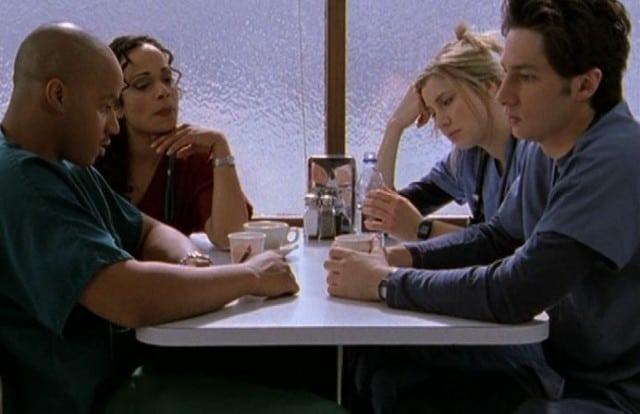 With an opening sequence mirroring the first scene of the series, it’s no real surprise much of “My Last Day” feels like story covered in previous, superior episodes of Scrubs. The opening scene alone touches on every single running story of the season, as J.D. reflects on the various events of the previous 23 episodes, while characters visit him in the mirror to deliver exposition, a clever way of catching everyone up to speed before the final half hour. Fortunately, what followed wasn’t the last impression ofÂ ScrubsÂ viewers ever got – had this been a series, rather than season, finale, “My Last Day” would go down as one of the more disappointingÂ ScrubsÂ entries from a wildly entertaining, ambitious first season.

A heavy dose of Todd in every scene alone suggests “My Last Day” is really scraping the barrel for story. When it does try to find new life in its running narratives, it finds itself weirdly bouncing between J.D.’s perspective and – oddly enough – Jordan’s point of view, passively viewed by us as we watch her react to the growing list of criticisms leveled at her by others around the hospital. While all this is happening, J.D.’s patient from the pilot returns and requires some serious bureaucratic maneuvering for surgery (which we find out isn’t as life-threatening as it initially feels, one of many odd turns). The stories couldn’t be any more emotionally aligned, observing both the positive and negatives of the central three doctors after a year at Sacred Heart, and while Mr. Bober’s case brings out the best in them, Jordan’s presence proves to be a reverse unifier, aligning the protagonists of the showÂ together and showing what happens when their energy and behavior turns negative and self-serving.

That dichotomy is rich with storytelling possibilities, andÂ “My Last Day” wants nothing to do with it, really, only engaging the idea on the most superficial levels. Instead, we get a lot of out of character moments: Kelso teasing Cox with a promotion that doesn’t exist, J.D. pushing a patient off on someone else, and Cox suddenly warming up to J.D. all feel out of alignment. These three moments are entire stories to themselves, yet they’re treated as cogs in this dramatic machine of rising tension, spinning and building until the iconic lunch scene, where Jordan cuts off every running story with a machete to the throat, Â pulling out all the unfinished threads ofÂ Scrubs’Â first season, and letting them hang in the silence following her outburst. That moment barely scrapes against the ideologies at play behind the scenes, the characters’ biggest professional successes being celebrated right before their biggest personal deficiencies come to light.

There’s so much that doesn’t work about this final sequence. Christa Miller’s delivery of the speech, how passively everyone reacts, and how J.D. is left alone, even though he really didn’t do anything terrible at all (hey, he didn’t know Jordan was Cox’s ex before he slept with her). It just feels like a case ofÂ ScrubsÂ being a bitter downer to be a bitter downer. The poignancy of the previous twoÂ is lost in “My Last Day,” replacing the unique emotional contours of each character with this rigid, narrow representation of everyone at the hospital as a two-faced animal of empathy and self-obsession. Again, an astute observation, but one “My Last Day” doesn’t do much with, instead reveling in how dumb and/or how depressed Ted is, or how meanÂ and defensive Jordan is about everything. All accurate, sure, but presented in such an imbalanced way – and in service of such a lifeless final scene.

That final scene is one of lowest pointsÂ ScrubsÂ ever hits: it doesn’t feel like an organic culmination of events, but instead a solution to the question “Well, we have too many story lines to wrap up in 22 minutes – what do we do?” Cliffhangers are often a terrible choice for comedies – interrupting the status quo of a comedy is hardly handled well, save for shows likeÂ Parks and Recreation – because they often involve a contrivance to create a dilemma, and then a half-hearted solution to back it up four months later when the show returns to air. “My Last Day” hits all of these sour notes, and it leaves the episode with a wildly unsatisfying last few minutes: J.D. sitting alone at the table just feelsÂ empty, less a result of meaningful climatic events, and more a byproduct of an engineered non-ending.

It’s too bad, because the fringes of “My Last Day” hint towards something much greater and meaningful. However, like numerous episodes preceding it,Â ScrubsÂ is still finding its way, juggling its many individual stories and struggling to find balance between them all. Later seasons would (mostly) do a better job than much of freshman year did, but as the 24th of 24 episodes in the series, the firstÂ ScrubsÂ finale proves the series is not ready to handle such a heavy load of critical character developments, rendering much of what happens a forgettable, bitter mess of underwhelming stories and the occasional laugh, closing out an otherwise impressive, consistently improving first season of comedy.

– Turk and Carla are fighting again! About what? Who cares!

– Jordan’s approach to sex is illuminating: “Sex is for making babies and revenge.”

– Cox actually matures quite a bit in this episode, showing KelsoÂ he can make decisions to both help the hospital and his future. The episode does not reward him for this.

– I really don’t get why Cox decides to poke her so much. He clearly enjoys having her around – so why just dump insults on her?

– The cycle of hatred never ends: the Janitor picks a new victim with the door bit from the pilot, though I have a feeling it will be a short-lived obsession for ol’ Jan.

– Final Todd High Five Count: One for three in the finale. Denied by not one, but two see-through surfaces (J.D.’s mirror and the operating room), but gets a Last Day Five from J.D.

– And that’s Season 1 ofÂ Scrubs!Â Thanks for reading, and let us know if you want to see more reviews in the comments!