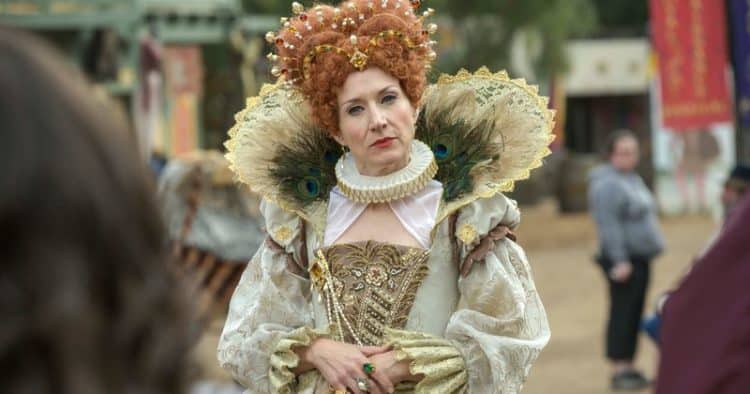 Actor, write and producer Seana Kofoed may be best known for her role on the cult favorite show “Men in Trees” (2006) which just had a reunion at the ATX TV Festival. She is currently taking over Summer Sunday nights with her series regular role on Lifetime’s newest must-watch series “American Princess” where she plays “Queen Elizabeth/Maggie” queen of the Renaissance Faire at which the show takes place. Kofoed can also be seen in a recurring role on TNT’s return hit series “Claws.” That series co-stars Carrie Preston who is one of the stars on the movie she wrote and produced 30 Miles From Nowhere (2019) which is available everywhere for viewing now.

1. She’s married to another actor

She’s married to CLAWS actor, Jason Antoon, and they have two young kids together. They met doing the Alan Ayckbourn play, TIME OF MY LIFE, at Paul Newman and Joanne Woodward’s Westport Country Playhouse in 2008. She credits the play’s director, John Tillinger, with giving her both her first Broadway show (NIGHT MUST FALL) and her first (and, so far, only) husband.

She produced 30 MILES FROM NOWHERE, a thriller she also wrote, with her Northwestern University pal and New York City roommate, Kelly Demaret. They filmed in and around their hometown of Chicago, and the main cast stayed near the cabin-in-the-woods shooting location, giving the whole two-week shoot a summer camp feel, and inspiring the company name, Film Camp Productions. 30 MILES FROM NOWHERE received the ReFrame stamp for gender-balance in the industry, as they had a female writer, director, and producing team, and a diverse and 50% female cast and crew.

She studied briefly at the Royal National Theatre in London, where she learned both iambic pentameter and how to make a good cup of tea. Which makes playing the role of Queen Elizabeth in Lifetime’s Jenji Kohan/Jamie Denbo comedy AMERICAN PRINCESS all the more delicious.

4. She did a play with Jennifer Jason Leigh of “Fast Times at Ridgemont High” fame

She did the second year of David Auburn’s PROOF on Broadway, playing the role of Claire opposite Jennifer Jason Leigh. Directed by Daniel J. Sullivan, and produced by Manhattan Theatre Club. Their final dress rehearsal was scheduled for September 11th, 2001. Because of the tragic events of that day, Broadway went dark, and they instead resumed performances two days later. Those hours spent on stage each night were a welcome escape from reality during a very difficult time for our country.

5. She can speak a little Arabic

She studied Arabic for a year and can sort of read the alphabet, say ‘hello’ and ‘how are you’, and count to ten. She hopes to one day produce her Chicago-set, half-hour comedy, THE HANNIGAN-HADDADS, about Irish-American in-laws and Muslim-American in-laws thrown together in marriage. She’s a big believer in entertainment’s ability to teach us to understand and enjoy, rather than fear, our neighbor.

6. She has called Canada home

She lived in Vancouver for two seasons, while filming the Jenny Bicks/ABC dramedy, MEN IN TREES. Because most of the actors lived in Canada while shooting, they would gather every weekend for Saturday night dinners, which contributed to the intimate ‘family’ feel of the cast, both on-screen and off. Many of the actors are still very close friends to this day.

7. She can play the violin

8. She loves her cuddle time

Despite having sleep-trained both of her children, she still lies in their beds each night until they fall asleep because she’s a total pushover. She plans to one day lay down the law, but meanwhile she’s getting her cuddle time in.

9. She was nominated for a Drama Desk award

It was for her portrayal of an 18th century, hunchbacked Scottish maid in Shelagh Stephenson’s play, AN EXPERIMENT WITH AN AIR PUMP, at Manhattan Theatre Club. In the play, she dressed as a sheep in sizable sheep ears, which are now tucked away in her kids’ dress-up box, in case she one day needs them.

10. She worked as a singing waitress after college

The cruise ship was called The Spirit of Chicago. Windy days in the ‘windy city’ were particularly challenging, for balance reasons. She had to wear a red vest, a feather boa, and sing ‘One Night Only’ between courses, but counts herself lucky, as one waiter sang ‘Phantom of the Opera’ in a mask and a cape while sweeping down the ship’s spiral staircase.