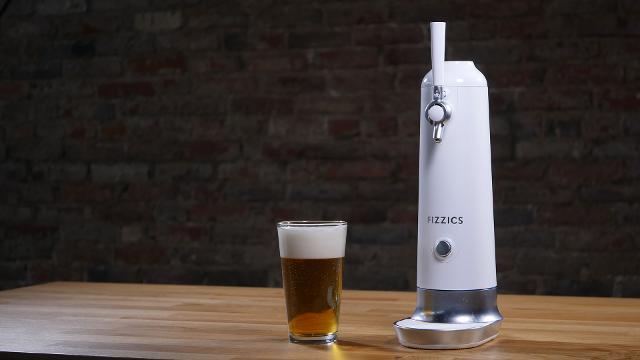 Not every invention that comes across the Shark Tank is bound to be one of the best ever and it’s certainly not going to be entirely successful. One of the winners, Fizzics, a device that uses sound waves to create a beer-pouring device that improves the taste and quality of one’s drink, has unfortunately driven its company to chapter 11 bankruptcy, thereby proving that such ideas are sometimes innovative and great to begin with, but kind of have to find a way to really appeal to people or evolve in the world of business. Fizzics was actually approved of by the judges despite their early skepticism, but now it seems to be backfiring in a big way.

The idea of making a drink taste better isn’t a useless way to spend your time, but it’s also a big luxury that a lot of people might look at as the new, shiny toy on the block that is something cute and quirky at the moment, but not entirely efficient or necessary after a while. These kinds of ideas are those that tend to come along and seem like the best thing since sliced bread, wink wink, but their shiny new finish tends to wear off quickly when it comes to the cost of producing them and finding those that really want to give up the old and reliable methods to implement something that’s eventually going to become the next old and reliable thing or just another hunk of junk that’s going to sit on the counter and never get used. That might seem unkind, but practicality does eventually break through and separate the wheat from the chaff so to speak, and Fizzics, for all that it’s able to do its job, is not the kind of machine that is able to make a lot of sense in a bar setting since people are there to drink, not wait for a couple of sound waves to make their drink taste and look better.

Honestly, how many times have you walked into a bar and really gone out of your way to tell the bartender to pour you a beer and make it as clean and good-tasting as possible? Plus, does Fizzics work for every last type of brew there is, or are there some that would be resistant or otherwise non-responsive to the sound waves? Call me crazy, but if a person ordered a dark beer or even something like a Hefeweizen the idea of seeing it be made more appealing is kind of laughable since the taste and look are something that many people expect to never change. But this is at the consumer level and might be argued that people aren’t as picky as investors are so it could be that the judges were looking at this from a very different perspective. After all when you’re trying to decide whether or not to funnel money into an invention based on the strength that it might actually work then you do need to take every question you can think of and use it to analyze the business model and the probability that it could work in the long term.

That might have been wise in this instance since those that decided to invest it Fizzics have unfortunately seen their investment go belly up as the company has gone bankrupt is at this point in dispute over what it owes to various creditors such as Reliant Funding and at least one other company that filed for commissions that were not paid. Fizzics is disputing the latter but even more disturbing than this is the fact that Philip Petracca, who still has ownership in the company, left in 2017 when the company was still doing well. At one point the product was selling out on QVC, though it does seem as though this should have been a sign that things needed to change quickly in order to find another venue that might employ their device and make it work. But unfortunately it sounds as though Petracca’s idea to expand the market by selling the device to breweries wasn’t taken as a serious as it should have been, otherwise the company might have at least made something of a profit rather than bottoming out completely and having to fold up the business.

In fact if you want the honest truth it sounds that Petracca was asked to leave once he voiced his idea and not be part of the day-to-day operations with the company. It kind of sounds like Fizzics acted out of spite rather than good sense, and in many cases this is never good for business. The device they created might have found a market if it had been given over to breweries and possibly could have done better had they developed an even bigger, more permanent device that could handle a greater volume of alcohol, but it does seem as though they were set on being petulant rather than progressive.