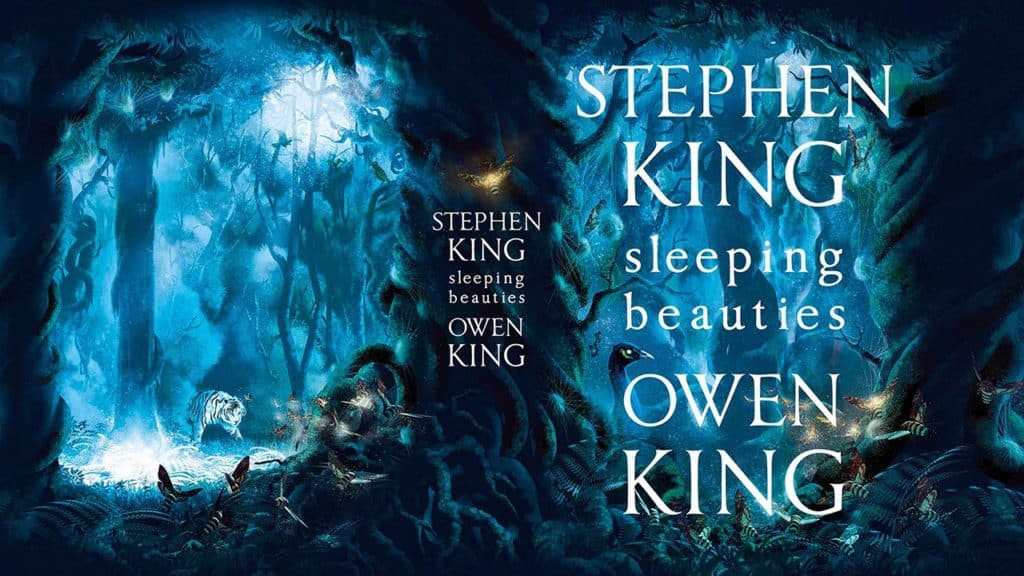 It’s been a good time lately for Stephen King when it comes to seeing his stories being adapted to the big screen and it might be that another one might be in the works. This story isn’t all his, as it has elements that are obviously different from his own thanks to the fact that he’s written Sleeping Beauties with his son Owen. There are mixed reviews about this story thus far and having read through most of it I can honestly say that it’s got the standard King feel to it, but there’s something slightly different thanks to Owen’s contributions, though you’d have to read one of his father’s books again to really see it. The whole story is something that seems to have been inspired by the times without a doubt, as the strange sleeping sickness, titled Aurora, has taken over and sent every woman that falls sleep into a coma-like state as strange, gossamer webs cover their entire forms. Disturbing the webs is a huge mistake as some men find out since upon removing them from their faces the women go berserk and seek to smash, rip, tear, or in some way damage whoever is in their path before they go back to their comatose state.

I won’t hand out a lot of spoilers but if you can guess what happens, the men are seen to be less than civilized when they realize that their wives, daughters, sisters, girlfriends, and so on are entombed in these cocoons that are not to be removed. Society breaks down almost instantly, and with only men left, and those few women that are able to stave off sleep for a while, things begin to descend into chaos rather quickly. The fact that the woman that started the mess is able to sleep and wake up is a central theme to the story since as one can imagine men are depicted in various ways, one of those being brutal and uncaring as they can possibly be. Hope Lee of Bound 2 Books might agree that the story is undeniably something that is reflective of the times as the women are seen to be either misunderstood, innocent, or possibly just trying to get by and do their best in a world that is dominated by men in many ways. The removal of the women throughout the world creates such mayhem that it immediately brings to mind stories such as The Stand, but from differing viewpoints obviously. There’s a serious power struggle that goes on during this story and a very big lesson that many people might take in different ways.

Making this into a movie would almost demand a two-part film since there’s simply too much to it to really jam into two to three hours. A miniseries might even be better since there’s enough in the story that needs to be presented in order to really get the feel of it, though the unfortunate part of this is that Stephen King’s miniseries don’t have a great track record. Under the Dome was just one of those in recent years that proved this point, and even The Stand was one that was kind of a hit and miss with many people. IT, when it first came out in the early 90s, was perhaps one of the most successful miniseries that has been created. Sleeping Beauties could be the same, though if it was brought to the big screen it does seem that the book could be turned into something special. Whether or not this will happen is hard to say since according to Geoff Boucher of Deadline it’s already in the process of being turned into a comic book series, much as The Dark Tower was long before it became a movie. While the comic rendering of King’s stories is usually rather impressive and gives the story the kind of attention it needs, trying to bring his tales to the big screen is a little more difficult given that there’s a shorter time frame and there’s typically a lot of information that needs to be included.

There is a lot of information in Sleeping Beauties, but if you read the book you might discover that a lot of the information provided is tedious and tends to go over itself more than once, as certain locations are used more than a few times and some concepts are visited and then revisited over and over again. It does feel as though big screen might treat this movie quite well if a director was found that could stick to the source material and not overdo it. One thing about any movie being made from a King story is that the concern is always there that it will be something great or something that people might feel they could have easily passed on. Thinner, The Tommyknockers, Dreamcatcher, and several others are just an example of the worst, but lately it’s been getting better, so there’s hope.