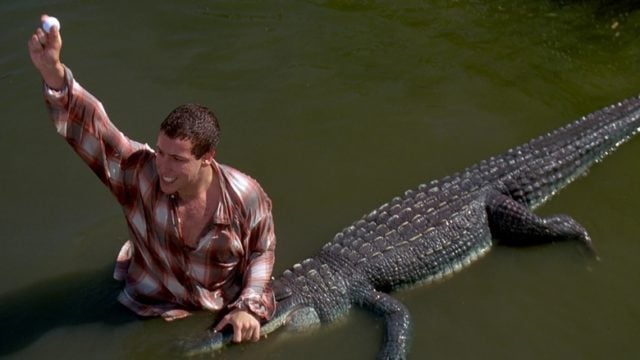 Adding an alligator into any scene definitely livens it up. Maybe a little too much for actors involved. Thankfully they usually don’t have to be right in the same scene as the feisty creatures, but the implied terror seems real enough that one can imagine just how bad a day a person would be having if they had to deal with this kind of critter snapping at them without warning. It doesn’t matter how big the alligator is, just having them nearby seems like a bad idea in any movie.

Here are a interesting scenes that might make you grateful you don’t live in gator country, or even know a gator enthusiast.

So you’re taking a shower and decide to tell a metal-loving lineman that he can’t dance. Harmless enough, right? Well, not so much when that same metal-loving lineman is also a gator lover that happens to keep one in his locker, or in a special room, or wherever he pulled the mean little bugger from. Ever hear a pro football player scream like a girl? Toss an alligator in the shower and you might.

If there’s anyone bound to be able to take on an alligator and live it’s the Governator, right? He even has a catchy one-liner that he spouts right after getting the impossible one shot kill. “You’re luggage” is about as Arnold as it gets, and the ease with which he dispatches the ONE alligator that comes after him is par for the course on any Schwarzenegger film.

As little sense as Adam Sandler’s movies ever really make, this one kind of goes beyond all rationality. Think about it, an alligator is standing right behind a large group of people dressed for a pleasing round of golf and no one thinks twice about it? If this was the Waterboy it might be a little more feasible since the bayou folk might have thought it looked like dinner. But in this film it’s just another goofy quirk that somehow is made to work. Really, who in the world just head butts an alligator? I mean beside Happy.

“This here’s Rocky, and he ain’t no puppy!” He might not be a puppy, but Joe Dirt certainly gets tossed around like a used chew toy. Gator farms are usually one of two things in any film, a place for a good laugh to occur, or a place to stay well away from. Used in the former sense they offer a very morbid but still physical sense of comedy and a sly way to get a few laughs out of the audience.

Okay all you haters of 1980’s movies, this one is expressly for you. Yes, the film is absolutely cheesy, and yes, it is as unrealistic as it gets, but that’s the beauty of it. People were so afraid of animals that could either swim faster, run faster, or kill them with a single chomp that this movie was perfect for its time. Just imagine a massive alligator that could b-slap you several yards away with its tail or cut you in half with its bite. It might not have won any awards, but it was certainly entertaining in a morbidly funny way.

You can pretty much choose any scene from this absurd movie and it’ll work.Â  I happen to like the scene where the massive beast snacks on a giant bear.

Big or small, alligators are movie gold when they’re handled right. Some of those in these selections were more or less just props that didn’t contribute much to the film, but they were still fun to watch.