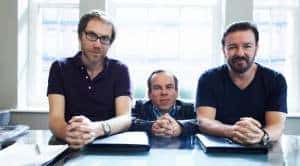 Tonight on HBO is the premiere of the British sitcom Life’s Too Short. The series, which stars Warwick Davis, was created by two comedic titans: Ricky Gervais and Stephen Merchant. While each have their own solo careers (Gervais a stand-up comic and Golden Globes host, Merchant an actor in films like Hall PassÂ and a voice actor in Portal 2), the two undoubtedly function best when working in tandem. Together, they’ve created some of the funniest TV shows in recent memory. They have quite an impressive track record: Life’s Too ShortÂ will be their third sitcom, and their fifth show overall. To prepare ourselves for the show’s U.S. premiere, let’s take a look back at their past exploits. 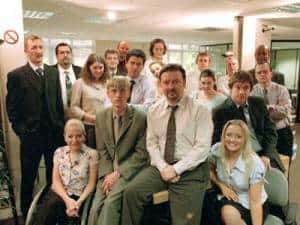 Gervais and Merchant met in 1997. Gervais, working at the radio station XFM, hired Merchant as his assistant. They both left the station in 1998, though, and Merchant went on to take a production course at the BBC. Merchant cast Gervais in a short film required for the course, “Seedy Boss,” using a character created by Gervais. The tape slowly began to circulate the BBC until it was ultimately picked up to series. That series turned out to be one of the most groundbreaking sitcoms of all time: The Office.Â

Starring Gervais as the delusional, attention-seeking boss David Brent, the series made a huge impact over its two-series run, eventually becoming the first British comedy to win the Golden Globe Award for ‘Best Television Series: Musical or Comedy’ and nabbing Gervais a win in the ‘Best Performance by an Actor in a Television Series: Musical or Comedy’ category.

The show was so successful that Gervais and Merchant brought the series over to the U.S., co-creating the little NBC version of The Office, starring Steve Carrell as Michael Scott. While the U.S. series is currently in the middle of its eighth season (and is surprisingly still quite watchable), the U.K. series ended after two series and a Christmas special. Gervais reprised the role of David Brent in two episodes of the American Office‘s seventh season, but both Gervais and Merchant have firmly denied any chance of a revival of the British incarnation of the show. 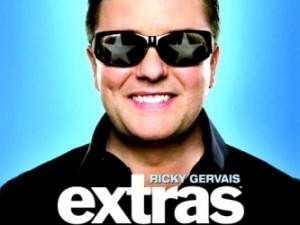 The OfficeÂ ended in 2003, and it was two years before Gervais and Merchant returned to television with their second sitcom, Extras. The series, which once again starred Gervais and fame-starved background actor Andy Millman, featured a myriad of celebrity guest stars playing fictionalized versions of themselves, from Ben Stiller to Samuel L. Jackson to Kate Winslet. Merchant also appeared in his first major acting role as Millman’s agent, the incompetent Darren Lamb.

The series had a rocky first season, but found solid footing in its second season, with wonderful guest turns by David Bowie, Daniel Radcliffe, and best of all, Sir Ian McKellen (whose on-screen explanation of acting side-splittingly hilarious).Â Like The Office, ExtrasÂ ended with a Christmas special, which saw its lead character deliver a brilliant monologue that served as the show’s thesis statement: fame isn’t worth the loss of one’s integrity.

The show was the first by the duo to air on a network in the US, with HBO airing both series and the special.Â 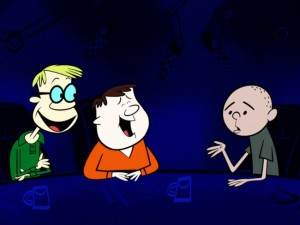 Following the 2007 conclusion of Extras, Gervais and Merchant focused on other projects. They returned to television in 2010 with the animated series The Ricky Gervais Show, which aired on HBO and was their first series to initially air in America (and later in the UK).

The series is essentially Gervais and Merchant prodding Karl with questions, and laughing/ridiculing his bizarre answers. The show is segmented, with each episode consisting of several conversations between the three, each set to vividly drawn, surreal animations. The series is notable for being the first Gervais/Merchant show to air beyond two seasons and a special; a third season is slated to begin later this year.Â 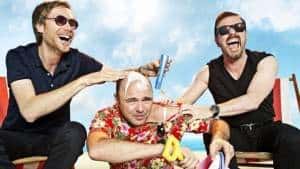 Of course, there was a problem with The Ricky Gervais Show: in its half hour format, it just wasn’t bringing Karl to the world in large enough doses. And thus was born An Idiot Abroad, a travel series starring Pilkington as he was sent around the world by Gervais and Merchant. Initially airing on SkyOne in late 2010, the series made the leap to America on Science Channel in early 2011.

The series sees very little of Gervais and Merchant, instead focusing on Karl as he reluctantly travels the world searching on trips set up by his friends, who typically appear only in phone calls to him. For the first series, Karl experienced the seven wonders of the world, while the second series (currently airing in the US) saw him going through “the bucket list,” of things many want to do before they die.

Of course, Karl isn’t really interested in the mind-broadening world travel, and that’s where a lot of the show’s humor comes in. He’s nonplussed by things most would be fascinated by. He’s the perfect anti-tourist, and thats the secret behind the success of the show. The show will not return for a third series, though; instead, a two-part special will air in December 2012 and will feature the round-headed Pilkington riding a bicycle through various locales with dwarf actor (and Life’s Too Short star) Warwick Davis in the bike’s basket. The ingenious title? An Idiot Abroad 3: The Short Way Round.

And now, of course, we get to their most recent outing: Life’s Too Short. The show is a synthesis of themes presented in The Office and Extras, starring Warwick Davis as a fictionalized version of himself who has a crippling lack of self-awareness. As the fame-hungry Davis attempts to regain his career (in the show, his most recent success is 1983’s Return of the Jedi), he runs into some celebrities, ExtrasÂ style. Liam Neeson, Johnny Depp, Helena Bonham Carter, Sting, and Steve Carrell all appear in the first season, usually alongside Gervais and Merchant, who for the first time also play fictionalized versions of themselves with whom Davis interacts.

The six-episode first series has already aired in the UK to extremely polarized reviews (though a second series has been confirmed), with many critics feeling uncertain about the show’s tone and Davis’s acting. However, Gervais and Merchant have always been divisive, and critical dissonance is almost required for any of their shows. We’ll let you know our thoughts after the first episode airs Sunday night.