Home
South Park
How Did South Park Set Off All Those Amazon Echos in the Premiere?
Prev Article Next Article 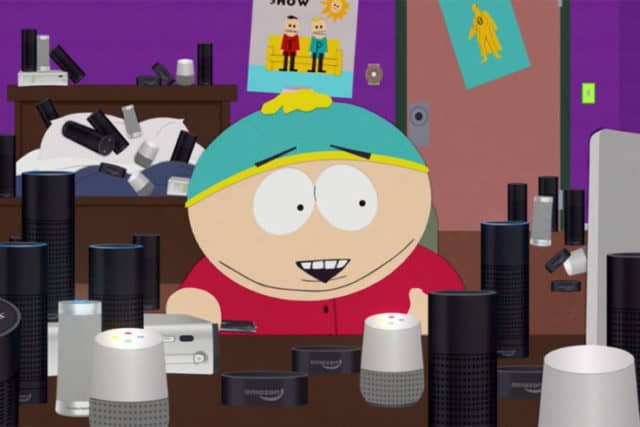 We expected the premiere of “South Park” to be intense, but what the creators did was nothing short of brilliant. If you’re a fan and an Amazon Echo owner, you were the victim of a prank and your Alexa is going to have you in stitches for weeks to come. The kickoff episode for the 21st season pulled out all the stops in the hilarious episode that infused a series of Google Home and Amazon Echo alarms, funny shopping list items and voice assistants with reminders into the opener.

“South Park” is the rave and there’s no getting around the fact that a series lasting 21 seasons is hitting people in the right spots. Viewers love the show because it tackles the heaviest issues in American society today and there is no sign that the creators are going to ease up. If they did, it just wouldn’t be the same. This season is going to be no different, but the inclusion of the Amazon Echo prank added a hard-hitting laughable moment amongst the more weighty and offensive issues that they’re so famous for.

The only welcome invasion of personal space

Only “South Park” can get away with the politically insensitive and generally crude depictions of famous personalities, hot box issues and the invasion into our personal spaces that they commit with each episode. It doesn’t really matter who you are, at some point, you’re going to feel the sting. There’s always something for everyone on the show and nobody is exempt from the humor. Little mercy is shown, but that’s the way we like it. The premiere found a way to get next to us in an up close and personal way with the Amazon Echo gag. No ground is sacred, but the r over the top commitment to digging deep is something that we’ve come to depend on, and when it’s your turn to be on the receiving end, you just laugh and accept it, realizing that this is satyr at its’ finest.

The latest invasion into the homes of viewers could be viewed as being offensive, but not in this dimension. We’re talking about breaking through barriers and succumbing to the effects of the “South Park” universe. It’s an entirely different dimension and when you’re caught up in it, reality takes a few shifts. You tighten your necktie the next day and present yourself as an upstanding guy at the office, and nobody is all the wiser. They can’t read your mind and they don’t know that you’re having the time of your life, laughing your a** off because you can’t stop thinking about what you’ve seen the night before. It doesn’t help that you were awakened by the voice of a “South Park” character, which brought it all back.

You bet it was. It takes a little tech savvy, but it is possible to make a few comments within earshot of Echo to have the references spread throughout the system and invade the homes of everyone associated. Although Comedy Central hasn’t yet commented on the incident, this isn’t the first time that this type of thing has happened and it probably won’t be the last.

There were plenty of references to Amazon’s Alexa along with the other voice assistant technologies. Many of the examples of Cartman’s examples aren’t things that can be shared in mixed company, but at some point, in the future, Cartman’s parents will take away his Echo. The latest stunt makes us wonder what’s next in the “South Park” arsenal of shock and awe?