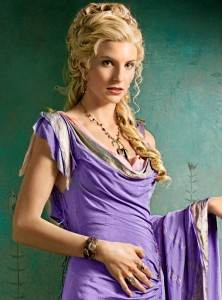 Spartacus: Vengeance continues its bloody fight in the aftermath of Spartacus: Blood and Sand, ransoming its eighth episode “Balance,” as Spartacus struggles over what to do with Ilithyia (Viva Bianca) in the wake of a startling revelation, while Glaber descends deeper into his obsession with killing Spartacus. A strong, if somewhat indecisive episode, “Balance” might leave a few questioning how much time remains to deliver a satisfying end to the season.

Last week I made mention of the fact that Spartacus: Vengeance had me a bit worried in its dash to the finish line, where the seventh out of tenth episode focused on incorporating a new group of characters rather than build toward the season finale. It was a great episode to be sure, but we’re at that point where people in the theater begin checking their watches, trying to get a sense of where the season will end up, and I saw from the sentiments expressed around the internet that some people thought ‘Sacramentum‘a bit of a mis-step. I maintain that ‘Sacramentum’made for an important insight into why slaves would follow Spartacus in fighting for others’freedom rather than revel in their own, but I can see why drifting back and forth between Capua and the rebel camp might frustrate some looking for conflicts to finally erupt.

To that end, ‘Balance’falls more or less along the same lines. We do get something of a showdown between Spartacus’camp and Glaber’s men by the end (including some pretty spectacular fight parings), but we never really expected there to be much weight to the sequence, because ‘Balance’hadn’t been building to that. Instead, ‘Balance’focused more on the ethical concerns between Glaber and Spartacus, where the two men draw their different lines, and how something like Ilithyia’s life divides their purpose. And that’s a worthy idea to explore, particularly allowing Liam McIntyre a chance to further make the role his own with the inner conflict of killing a villain pregnant with his child, but I’ll very much understand if viewers and other critics take the thread to be a diversionary hour that brings more words than plot progression. After all, Ilithyia ends the episode near of exactly where she began out in the woods, so it’s hard not to feel like we too have simply gone in a circle for the hour. 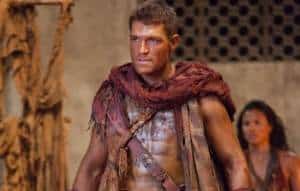 What ‘Balance’really does, however, it does rather well, questioning the very idea of ‘vengeance’itself, and how revenge stands in relation to purpose. Gannicus brings Ilithyia to Spartacus for the purpose of creating a literal balance, allowing him to take the life of Glaber’s woman as payback for his own and ideally ending the crusade* that has seen countless men and women to their end. Understandably so, Spartacus begins the hour eager to take that debt, and while the truth behind Ilithyia’s pregnancy stays his hand, it ultimately allows for a clear character separation between he and Glaber. When presented with Ilithyia’s life, Spartacus learns that balance can never be struck by adding further blood to the scales, where Glaber only sees opportunity for himself and advancement of his legacy.

(*) For one, I might question how ending Ilithyia’s life would really balance things. Glaber may have been the one to put both Spartacus and Sura in shackles, but it was still Batiatus who murdered her to break Spartacus, a debt seemingly balanced by his death at the end of ‘Blood and Sand.’If now the fire of Spartacus’passion has shifted to killing Glaber for putting them into slavery, I wonder how next Spartacus would reason his crusade after Glaber’s death.

And by the same token, I wonder if Spartacus’abandoning his crusade after killing Ilithyia would really end the rebellion, as Gannicus hopes, what with the dozens of other men and women looking for vengeance against the Romans without a thought toward Sura.

A lot of ‘Balance’devotes itself to further buildup of the season’s climax, between Glaber and Spartacus as well as the other characters. ‘Sacramentum’was all about identifying both Glaber and Spartacus as leaders, contrasting the manner in which they inspire loyalty from their men. If ‘Sacramentum’was the why, ‘Balance’is the what, taking further care to paint what differences lie between the two foes. We need to know what they hold most dear* before we take them into the real conflict, and I have to hope that the end of the season will pay off as much as the season has been building toward. I’ve sadly stopped seeing Spartacus: Vengeance as a completely perfect season of television, though I give it as much confidence as I can toward presenting a satisfying conclusion.

(*) Glaber does seem to have shifted his motivations rather dramatically, whereas he began the season as a reasonable man burdened with an embarrassing quest, now he abandons the child he craved so dearly in episodes past and seems to have lost himself within the quest for Spartacus. And why, exactly? It’s not like Varinius, Seppius or Ilithyia’s father are around to rub it in his face anymore.

But it isn’t all about Spartacus vs. Glaber of course, and a number of truths and other ‘Balances’manage to come out over the course of the hour. Most notable of which is the confirmed (as much as it can be) parentage of Ilithyia’s child, which presents a rather interesting dilemma for Spartacus, though I wish we were somewhat more privy to the reasoning of leaving Ilithyia out in the woods, presumably to return straight to Rome. The child was important enough that Ilithyia live, yet Spartacus seems perfectly content to allow the baby whatever life it might find in the very society Spartacus eschews, even allowing Glaber to remain ignorant of his heir’s true heritage. I imagine carrying Spartacus’child would prevent Ilithyia any gruesome fate at least until next season, so in the meantime it’ll be very interesting to see where her loyalties lie now that Glaber abandoned them both to die. 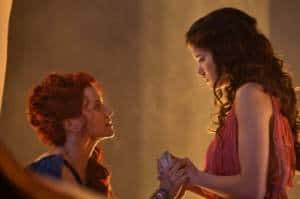 Similarly somewhat lost in the woods is Lucretia, who continues playing manipulator to Seppia (Hanna Mangan-Lawrence) and Ashur (Nick E. Tarabay), though to exactly what end I’m still not sure. Lucretia has been drastically transformed this season as well, though it’s still difficult to pinpoint whether she truly loves her friend Ilithyia, or only wants the baby to replace her own. And without stirring up any hot-button debates about sexual abuse, it remains similarly unclear what she seeks to gain from allowing Ashur to mistreat and dominate her so. Both she and Ashur seem somewhat equally unhinged , and it’s getting more than a little complicated on the Roman end of things to keep in line who allies with who, or moves against one another internally.

‘Balance’does a good job of its namesake however in devoting time to the supporting characters as well, giving a little bit of spotlight to Gannicus’efforts to re-build his brotherhood with Oenomaus, Crixus’molding of Naevia into someone strong enough to love again, Mira’s insecurity about Spartacus, and even Lucius with his heroic death. Everyone seems to explore a certain ‘balance’in their own way, Gannicus offering his life to Oenomaus as payment for Melitta, or Crixus evening the scales of power between he and Naevia. ‘Balance’is not always about making things literally even out, but rather finding enough peace with the uneven scales to push forward.

With only two episodes left, I’m definitely ready for major conflicts to erupt and a real war to begin, so however intelligent it may be, I can understand that ‘Balance’isn’t going to please everybody. At least the big fight was pretty cool, right?