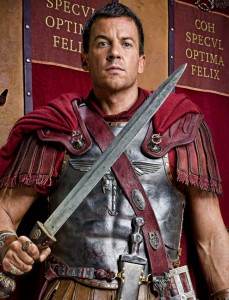 Spartacus: Vengeance continues its bloody fight in the aftermath of Spartacus: Blood and Sand, igniting its ninth and penultimate episode “Monsters,” as Spartacus struggles to unite his men for their cause, while a broken Ilithyia (Viva Bianca) returns to find her place against her maddening husband Glaber. An incredibly strong, if somewhat uneven episode, “Monsters” climactic end will have viewers howling at their televisions for the final installment next week.

Wow, man. Just wow. I’m terribly afraid of losing my eloquence when I talk about ‘Monsters,’as I’m still coming down from something of a high over it, but I wanted to capture the sheer excitement the latest episode of Spartacus: Vengeance imparts. We all thought after ‘Libertus‘that the climactic battle that brought down the stadium simply couldn’t be topped in terms of sheer scope, but I actually think the assault on Spartacus’temple tops it. It’s a much smaller scale battle to be sure, but the emotional consequences and sense of palpable danger feel that much higher, especially now that we’re in the penultimate episode, to the point I could barely scrape my jaw from the floor or the smile from my face the entire time. And with an entire episode to go! I’d have been somewhat content if the season had ended there, ignoring the mountainside retreat that Glaber intends to wait out their starvation from. It wouldn’t be historically or climatically accurate to break there, but we’ll get back to history a little later.

To be honest, much of ‘Monsters’feels overshadowed by the climactic battle at its end, and even Ilithyia’s dramatic reversal of Seppia (Hanna Mangan-Lawrence)’s attempt on Glaber’s life, which was equal parts shocking, sinister and sexy. And for clarification’s sake, I received episodes 9 and 10 (which I’m putting on RIGHT after this) in the mail a few days ago, and with their screeners Starz includes bullet pointed lists of spoilers not to reveal prior to the episode’s airing. Of course, moron that I am, I accidentally saw the very first line reading, ‘The deaths of Sepia and Varinius,’and yet while watching the episode, still wound up completely shocked at their passing. That’s how delicious and involving, ‘Monsters’was, that I never would have anticipated Ilithyia’s involvement, or the explosive manner in which Varinius (Brett Tucker) would meet his end. And may the gods bless Spartacus: Vengeance for that. But really, between the unexpected rain of fire destroying the temple, the invasion of Ashur’s men and the brutal sense that we really could lose anybody*, those last 15 minutes really were right up there with ‘Libertus’in cementing Vengeance as one of the more consistently strong seasons of any television series in recent years. 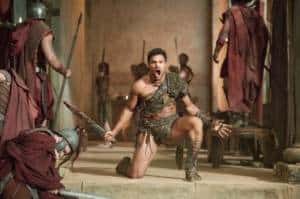 (*) I’ll be interested to read any clarification on the matter in the coming days, but I might venture a guess that killing off Varinius, who historically survived and made his own assault on Spartacus’men after Glaber had failed, occurred to keep us on edge that Spartacus: Vengeance isn’t necessarily beholden to history, and thus any one of Spartacus’men that we believe save could be next for the chopping block.

‘Monsters’was another strong episode for Ilithyia, who dances around the line of morality quite a bit in her return from Spartacus’camp. I’m not entirely certain why I arrived at this, but I had assumed that Spartacus’acts of kindness in ‘Balance‘had brought Ilithyia over somewhat to the light side, to the point she’d rather wash her hands entirely of all this bloodshed and drama by leaving Capua or at the very least, commissioning Gaius’murder to end the affair for good. And with all that had happened, now to find Seppia in her husband’s arms, it had seemed Ilithyia genuinely turned a corner in valuing the life of her child, and her friendship with Lucretia. So imagine my surprise when Ilithyia swung the other way, brutally murdering Seppia in the course of her own revenge plot, declaring herself a monster along with Gaius, and doing it right there, blood covered and adjacent to the still floating corpse of Seppia! Motivations be damned, that was depraved, disturbing, and I loved every slow-motion second of it.

‘Monsters’of course being the theme of the night, the episode still managed to deliver the more thoughtful discourse the series has grown proficient in, where once again we find ourselves posed with the question of what turns people from human to monster. Gaius seems to have been irreparably broken by his wife’s betrayal and the pressure placed on him from above, while in reality Spartacus has done relatively little to warrant such obsession on his part. We can accept that Gaius has been lost to his fury, that Ilithyia was too far gone to ever be humbled by her experience in Spartacus’camp, and even that Ashur has become an institutional man whose vision of freedom involves occupying the very same walls, and keeping a frightened Lucretia by his side. 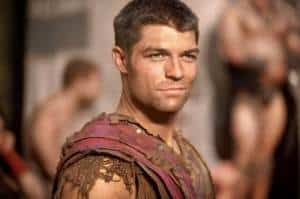 Spartacus however, is a monster of a different kind, similarly broken by his experiences and incapable of giving Mira the love she craves even before her attempt on Ilithyia, but strong enough to understand the pain he inflicts on others. For Spartacus, freedom will always be of a higher cause than vengeance, and with that we slowly gain perspective on the very title of the series, and come to understand its evolution in moving away from it. Rather than allow his vengeance to consume him, Spartacus channels it toward his desire for others, cleverly figuring means of restoring broken bonds throughout his camp. And with that strategy of wine and brawling, we’re privy to some excellent, albeit somewhat superfluous fight sequences that might not otherwise come to pass. Prior to having finished the episode I might have expressed concern that these contests of teaming enemies to battle in pairs seemed like something of a waste for a penultimate episode, but the very spirit of the fights and their aftermath becomes too infectious to begrudge. And it’s a good thing too, because without repairing some of the bonds between Gannicus and Oenomaus, Crixus and Agron, Saxa and Mira, or Nasir and Lugo, that final battle might have gone very differently.

And with that final battle, we’re treated to one of our first major diversions from history, the death of Varinius. Prior to ‘Monsters,’I had a thinly veiled curiosity how Starz might portray the long history of the Third Servile wars, in which Spartacus’armies totaled in the thousands rather than dozens, and how further season might progress. Now it seems to be a bit clearer that Vengeance will likely end with the historically accurate conclusion of Glaber’s efforts, while next season skips past Varinius’equally failed campaign to bring in the recently cast Marcus Crassus, somehow involving a young Julius Caesar as well. It’s hard to believe there’s still a whole other episode to go following ‘Monsters,’but I’d be satisfied if ‘Wrath of the Gods’delivered even half of the payoff of tonight’s final battle, definitely in contention for the best episode of the season.