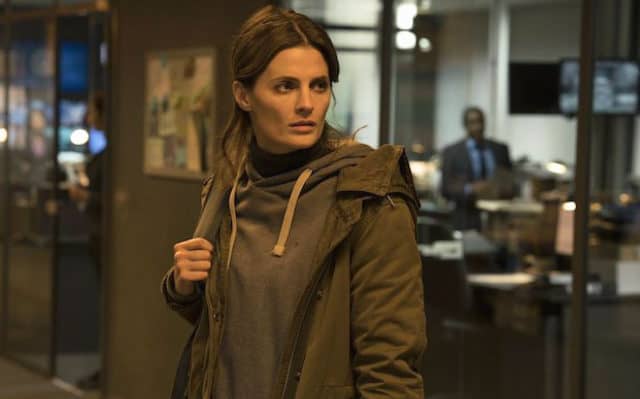 Fans of Stana Katic -Â and of great foreign televisionÂ in general – have been waiting for months to learn where the USÂ  home forÂ Absentia was going to be.Â  Well, the wait is over!Â  Katic’s new showÂ AbsentiaÂ has a US home – Amazon!

It really has been a bit of wait.Â  News of the show was first announced last fall.Â  It garnered immediate excitement. Fans of ABC’s CastleÂ were happy to know Katic would be on a new series.Â  Critics were intrigued by the show’s team.

Absentia Has a US Home – the Road to Amazon

Absentia is produced by Tel Aviv basedÂ Masha ProductionsÂ and directed byÂ Oded Raskin – the team responsible for the critically acclaimed Israeli series False Flag.Â  FurthermoreÂ the international division ofÂ Sony Picture Television was handling the distribution.Â  Adding to the buzz was the gradual rollout of the rest of the principal cast:Â  Patrick Heusinger,Â Cara Theobold,Â Bruno Bichir,Â Angel Bonanni,Â Ralph Ineson, andÂ Neil Jackson.Â  Â WhenÂ it was learned thatÂ AbsentiaÂ would be the opening screening atÂ the June 2017Â Monte Carlo Television FestivalÂ it solidified the idea that was set to be a stellar TV series.Â Â

Not long after that Monte Carlo premiere the news about where it would air started coming out, but not for theÂ US. Then inÂ September AbsentiaÂ began streaming in many other countries, including Spain, Portugal, Romania, Bulgaria, and Poland.Â  (As a result of that, in the US we’ve been ducking online spoilers left and right!)Â  Even though there was news that Absentia had an American pickup, who it was or when it would air was unknown.

Why We Love thatÂ Absentia has a US home at Amazon!

Today the trades – includingÂ Deadline -Â announced that Amazon will be streaming Absentia – and not just in America!

This Amazon distribution is the final piece of a great hat trick.Â  It means that in just a few months Sony Picture Television has pulled off a near global pickup of Absentia.Â  Although it hasn’t aired yet, Canada’sÂ Showcase network was an early announcement. Meanwhile, it’s already streaming in many markets via Sony’s AXNÂ and Crackle.Â

You guys are amazing! Welcome Latin America to the #ABSENTIA universe. 👏🏼 Thanks for watching! 💋💪🏽 #AbsentiaEnCrackle pic.twitter.com/XAfjBUyyDA

Having a quality product certainly helped Sony in this worldwide movie-like bow.Â  Deadline notes that in its initial rollout (in Spain, Portugal, Romania and Poland) Absentia was number one in its timeslot.Â  If you look at the promo it’s no surprise why! (Peter MiholaÂ is the Head of Art & Creative for SPT Networks Central Europe )

Amazon is the home of critically acclaimed shows like The Man in High Castle & Bosch.Â  With Absentia they areÂ adding another excellent drama to its roster – this time with a female lead.Â  Â In the year of Wonder Woman,Â  the fact that Absentia has a US home at Amazon is another step in the right direction for Hollywood norms – and for women in general.

Absentia will be available on Amazon in 2018.Â  For those who don’t like starting a series for fear that it won’t continue – no worries! It’s looks like having a US home for the TV seriesÂ Absentia meansÂ it’sÂ greenlighted for a season two!Â  (The picture is from Katic’s official Facebook page.)

Are you ready for AbsentiaÂ in America (and in all the other countries that will be covered by Amazon)? Let me know what you think!