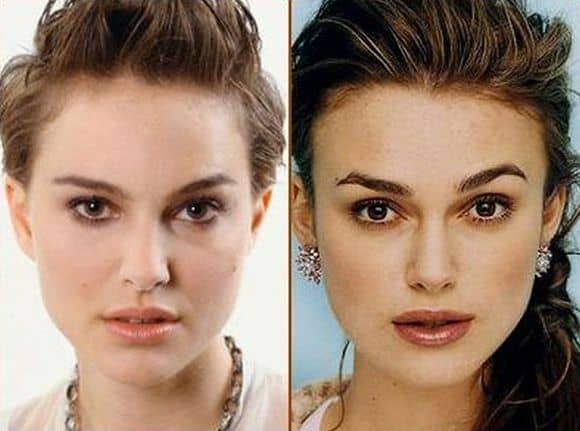 Some folks are under the impression that Keira Knightley and Natalie Portman look exactly alike, and that Star Wars is the basis for this. Sigh, how in the world did this happen? Okay, it’s true that they bear some resemblance, a striking resemblance actually, to one another. But there are a good number of differences that can be cited and enough of a contrast between them that can be noticed. We can’t ignore one big discrepancy however, and that’s the fact that Knightley had a role in Star Wars: The Phantom Menace, whereas Portman has never been seen in a Pirates of the Caribbean movie. Let’s face it, both women are widely known for their roles in these franchises. However Knightley played a limited role in Â The Phantom Menace as Sabe, the bodyguard to Queen Amidala. There are more differences to draw from though.

They’re a few years and inches apart to start with. Knightley is a full three inches taller than Portman and at least four years younger. Amazingly though Knightley’s debut was only a year after Portman’s. For Portman it was Leon: The Professional, and for Knightley it was the film Innocent Lies. If you really want a difference that you can label it has a lot to do with the type of energy they bring to a role. Natalie tends to be more serious, more down to earth, and more ground, whereas Keira is more often than not the rebellious sort that seeks to go against the grain and do whatever it takes to defy the established order. Her role in Domino brought that out very well, as did her role as Elizabeth Swann in the Pirates franchise.

Portman isn’t averse to rebelling, but her characters tend to require order, stability, and a sense of reason to them that Knightley’s might have but don’t often cling to. Keira seems to dance around the idea of stability rather than using it as a means of balance, using it just enough to keep herself from slipping too much. Natalie on the other hand definitely dips into the more reasonable, logical side of life more often than not.

Their appearance is another factor that many people get hung up on. As I mentioned Keira is a bit taller than Natalie, but also has a slightly wilder look to her, as though she might be more of a free spirit than Portman. This is no insult to either woman, but the looks are hard to get around. Natalie Portman looks like more of a homebody than Knightley, even if the opposite is true. Their eyes, their face shapes, and their bodies are proportioned in such a way as to be completely different and to give a very different impression of each woman. Even the way they stand, smile, and move is different.

For those that aren’t fans of either woman or wouldn’t bother trying to tell them apart it might be difficult to differentiate between them. But there are a lot of differences if you just look.