Home
Movies
Steven Spielberg Was Once Turned Down to Direct a Bond Film, Did Indiana Jones Instead 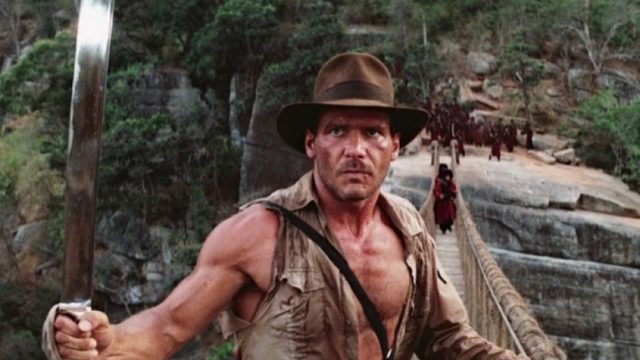 The making of Indiana Jones and the Raiders of the Lost Ark had a pretty humble beginning since it kind of started when George Lucas, burned out and ready for a vacation, made his way to Hawaii and lo and behold bumped into his good friend Steven Spielberg. At one point Spielberg managed to convey how he’d wanted to do a Bond film and had even taken a proposal to the studio. They turned him down without much consideration however and there’s no doubt that he was a little bummed out. But knowing Spielberg he was already thinking about another story to do, and Lucas managed to give him an idea to direct a story about a rogue archeologist that he’d named after his dog, Indiana Smith. When Spielberg thought that the name sounded too hokey it was surmised that Indiana Jones would be workable, and so six months later the two began to come up with the idea for the intrepid archeologist as they pitted him against nothing less than an entire army of Nazis in his quest to find something something that would seem to validate the very existence of mankind in some crucial way, the Ark of the Covenant.

Strangely enough it was Tom Selleck that was selected for the lead role at first, which is odd since he was a relative unknown at that time. Unfortunately he had to bow out thanks to his previous deal with another show titled Magnum P.I. So instead the duo went for Harrison Ford, whose popularity had already been soaring at that time thanks to his involvement in Lucas’ hit movie Star Wars. Ford brought a worldly manner to the lead role that was spot on and managed to capture the essence of Jones in a way that couldn’t possibly have been done any better by any other. The fact that they made another movie after this was warranted since the first one was simply a smash hit and deserved as much.

The numbers of extras, live animals, and reels of film that were used in the making of the Indiana Jones films is something of a marvel since no matter how good or bad people believe they are they created a legend that is still known to this day and celebrated by millions of fans. Indiana Jones is perhaps one of the best known characters around no matter if a person takes the story seriously or enjoys seeing one spoof after another that references the most iconic scenes in the movies. Together Lucas and Spielberg created something that has managed to reach multiple generations on some level and has provided hours of entertainment for everyone that decides to partake.

While the making of a fifth installment will hopefully be the last the idea of passing on the torch isn’t likely to fade, though thankfully it won’t be to Shia LaBeouf, who was a less than stellar addition to the last movie. If Indiana Jones lives on in another form or gets rebooted in the years to come it’s going to take a titanic effort to carry on the legend.